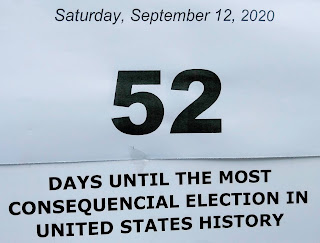 As of today, there are 53 days until the most consequential election in American history. This is what they say about many past elections, but this is really it. For if the Democrats seize power – control of the U.S. House, the U.S. Senate and the Presidency – and doing it by hook or by crook (the justifies the means, you know) America as we know it will be forever changed. America envisioned and created by the Founding Fathers will disappear into the shadows of history.
The ungodly secular-humanists/Marxists slow march through America’s institutions over the last 100 years or so will have reached a crescendo – fulfilling Mr. Obama’s fundamental transformation of America. Never again will the demonic Democratic Party relinquish its grip on political power and control of the masses.
Envision with me what a Socialist Democratic Party, takeover, a bloodless coup, a regime change, would look like. This is one in a series of daily articles leading up to the 2020 General Election
It seems today that no one stops to think of what is best for the child when it comes to things that affect them.
Democrats and Adoption
When it comes to adoption it seems to me the Democratic Party favors allowing and even encouraging that children be fostered or adopted by homosexual or lesbian households. In fact, in some states and locales some faith-based organizations have even been sued because as part of their placement policies would not place a child with two homosexuals or two females. This has caused some adoption agencies to go out of business rather than violate their core biblical and moral beliefs, policies and principles. The Democrats wholeheartedly support this approach.
Furthermore, Democrats stand for child abuse when it comes to permitting or forcing minor children to undergo impossible ‘gender altering’ therapy and body-mutilating surgeries, with or without parental approval. This is tyrannical.
Generally, this is not healthy or beneficial in the long term for a child. Optimally the best environment for a child to be raised in a home with a married biological male and biological female. Ideally for a child to develop and mature normally, they should have the influence of a mother and a father building into their lives. With same sex households this is not possible.
Faith-Based Adoption Agencies
Here a couple of excerpts from a 2018 Heritage Foundation article, “The Left’s Assault on Adoption”:  “Faith-based adoption agencies that follow their religious beliefs have a high level of success in placing older and disabled children…In Georgia, every Democrat in the state senate opposed a bill that would protect the ability of faith-based agencies to follow their belief that every child deserves a mom and a dad…Federal action that allows faith-based adoption agencies to operate according to their beliefs will keep kids first.”
Conclusion
Among the many reasons NOT to vote for ANY Democrat candidate is the Party’s position on insisting that there be no “discrimination” whatsoever by faith-based adoption agencies in placement of ANY child with same sex households. The Democratic Party does not support the uniqueness and necessity of nuclear or natural families (biological male father and a biological female mother married to each other) that is preferable to all other relationships. Instead of Comprehensive Sex Education, schools should be teaching and encouraging abstinence until marriage for the sake of the individual and society.