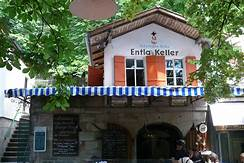 When I was stationed in Erlangen from 1966-1968 with the US Army, the town had three breweries in operation, Erichbrau, Kitzmann, and Henniger-Reifbrau. Eventually, Henniger and Erichbrau were bought out by a larger brewery (I think it was Tucher of Nuremberg), and Kitzmann was bought out in 2018 by Kulmbacher, a major brewery in Kulmbach. Erlangen, a town which in the early 20th century, had earned a reputation as a “Bierstadt” (beer city) has been struggling in recent years to maintain that tradition. The re-establishment of an old brewery (Steinbach) has helped, and a few years ago, another former Erlangen brewery, Weller Bier, was re-established. And today, I read in the Erlanger Nachrichten that a new brewery is being opened in Erlangen, Entlas Brau.

The owner of Entlas Brau, Vincenz Schiller, is the son of Thomas Engelhardt, owner of the Entlas Keller located on the grounds of Erlangen’s annual Bergkirchweih. I had the pleasure of meeting Mr Engelhardt several years back when I was writing my book on Erlangen. During the warmer months of the year (April-September), the Entlas Keller is open and features a limited daily menu, often with duck, as the name Entlas Keller implies (Ente=duck).

Hopefully, if I ever get back to Erlangen, I can sample the new brew.