Hat tip Gates of Vienna, RAIR Foundation, ITV News, Vlad Tepes. Translation by Ava Lon. Today, the entire nation of France is trying to deal with yet another horrific Islamic act of terror. Once again, a French citizen has been slaughtered-decapitated by a young Muslim refugee, angered because the Frenchman, a teacher, had shown Mohammad caricatures to his class. Today, thousands of French turned out in major cities to demonstrate their solidarity with the teacher, Samuel Paty. -ITV News 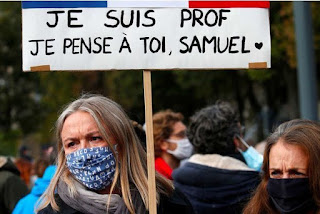 -Paris Match: Poster reads, “I am a professor. I am thinking of you, Samuel” 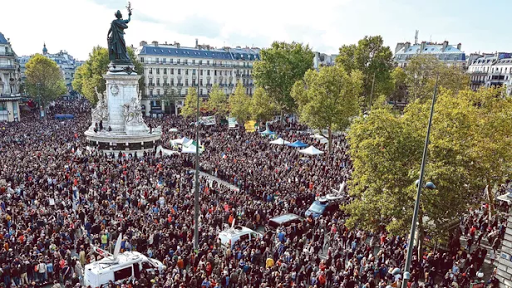 Prior to the murder, an activist imam, Abdelhakim Sefrioui, produced the below video, in which he interviewed a female Muslim student who had chosen to remain in the classroom when Paty advised Muslim students to step out because he was going to show images they might find offensive. In the video, the imam demands that the “thug” teacher be fired, and advises French Muslims to be vigilant. (Sefrioui has been detained.) One French Muslim took vigilance to a new level. The killer, identified only as Abdoullakh A.(18), a Chechen refugee, born in Moscow, traveled to the Paris region from his home in Normandy, proceeded to the school, sought out Paty, and butchered him. He was subsequently shot to death by French police. Before he was shot, he apparently posted a message on social media featuring a photo of the severed head. (I have seen it, but for obvious reasons, will not post it.

While it is nice to see tens of thousands of French marching in solidarity with the victim and defending free speech, this will not bring an end to the carnage. Lighting candles is clearly not enough because the jihadis are not impressed. Once again, a “refugee”, who was welcomed into France, has shown his appreciation by committing an act of barbarity and making a statement that freedom of expression is not respected. When will Europe’s leaders wake up and bring an abrupt halt to the nightmare they have allowed to take over an entire continent? Innocent people are dying, for God’s sake!