Last time I checked, China Joe has not been inaugurated as POTUS yet. Heck, he won’t even be the president-elect till all the electoral college votes are cast in December. But, like most authoritarians, he expects you to comply 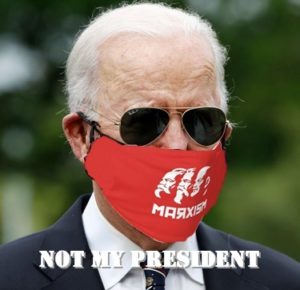 Former Vice President Joe Biden suggested that Americans limit their gatherings on Thanksgiving and adhere to coronavirus protocols in their private residences, citing experts who, according to the former vice president, recommend gatherings of “five people, maximum ten people” who are “socially distanced, wearing masks.”

Biden, whom the media have declared president-elect, detailed his view on holiday gatherings during a Monday press conference in Wilmington, Delaware, urging Americans to adhere to the advice of “health experts.”

“What is your message to people who are considering, for example, getting together with their families and others for Thanksgiving? Would you urge people to reconsider their plans?” a reporter asked.

“Here’s what I would do. Let me tell you what health experts have said to me,” Biden began.

“They strongly urge that, if, in fact, we’re going to have Thanksgiving with anyone, that we limit it to maximum, maximum, they suggest five people, maximum 10 people, socially distanced, wearing masks, and people who have quarantined,” he explained.

Mind your own business, Joe. But, Democrats think they know how to run our lives, and are happy to tell us how. And force us how.

“Save lives. Look, I just want to make sure that we’re able to be together next Thanksgiving. Next Christmas. I mean it is an international crisis. It’s an international health crisis,” he said, adding that the world is “at war” with the Chinese coronavirus.

Wait, it’s an international crisis? Huh. For all that we hear, this is all the fault of Donald Trump. Meanwhile

President-elect Joe Biden called on Congress to pass a stimulus bill in its lame-duck session, one that is similar in size and scope to legislation the Democratic-controlled House originally passed in May.

“Right now Congress should come together and pass a COVID relief package like the HEROES Act that the House passed six months ago,” Biden said at a press conference on Monday. “Once we shut down the virus and deliver economic meat to workers and businesses, then we can start to build back better than before.”

Both were so full of left-wing priorities, most of which had nothing to really do with COVID relief, so, yeah, they were not passed. Nor did the House take up what the Republicans in the Senate were offering. This is the reason it is super important to keep the Senate if Joe does get installed.