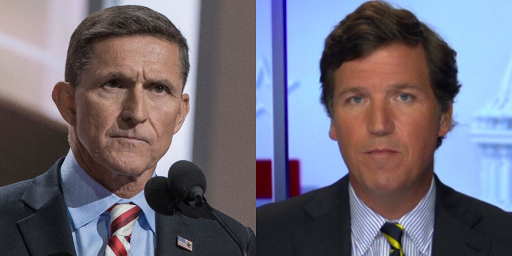 Powell was part of a Thursday news conference in which prominent members of the Trump legal team laid out their less-than-substantive “opening statement” in a multi-pronged attempt to challenge swing-state election results with sworn statements regarding mass voter fraud — an exercise that has invited no shortage of establishment media criticism.

Much to the chagrin of some conservative audience members, Carlson was one of the loudest critics, joining with left-wing media peers to suggest Powell and her colleagues ought to go public with the evidence they claim to possess.

“Come on @TuckerCarlson you’re still not being genuine. @SidneyPowell1 is slaying dragons with her small team and you sit on high and pontificate,” Flynn tweeted Friday.

“Go do some street journalism and ask the tough questions yourself. Why the hell not!?” the retired Army lieutenant general added.

The verbal onslaught came after Carlson had attempted to nuance earlier statements made on-air, suggesting he would also be one of the loudest supporters were the Trump legal team to expose widespread voter fraud in court while remaining realistic about the fast-closing window of opportunity.