The French blog, Résistance Républicaine, is running an article by a former Muslim identified only as Samia, in which she writes about the hypocrisy of Islamophobia charges by Western Muslims, particularly certain Muslims of  Algerian origin. A note to the reader: Samia takes no prisoners.

I am not an apostate from Islam, I am a free French citizen! 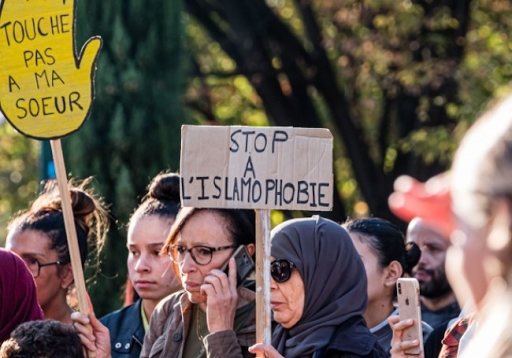 Caption below photo: The spoofs are out! Their indignation is variable geometry. We never see them denounce the serious attacks on the freedom of those who disbelieve in Islam and live in a country decreed Islamic. Curiously, never!!! (Posters (l-r): “Don’t touch my sister”  “Stop Islamophobia”

What happens in Muslim countries for all those who don’t believe in Islam? Atheists, agnostics, Christians….What happens? Surely not what happens to Muslims in France!!!

While in our country, where freedom of religion is consecrated, where each can exercise his religion without any fear, whatever the professional liars say, apostates from Islam, infidels, are, in Muslim lands, mistreated, persecuted, hunted like animals, every day, in deafening silence, deafening!!! Who speaks of it? Nobody!

On the other hand, each day that passes, we are bombarded, we are hit with the poor Muslim victims, the good joke of Islamophobia. Yes, a joke, a farce, a complete deception. France has been totally transformed, to my chagrin, in contact with followers of Mohammad. Neverending mosques, halal butchers, streets infested by veils, all kinds of beards, and so on. Oh yes, and not to forget all the incessant demands for accommodations, which are increasingly satisfied. We want this, and we want that, and then this, and then that. It never stops! And incidentally, when we are not happy, a little cut here and there, and voila. And to top it all off, the professional mourners, the dhimmis on service get into action at the slightest critique of all the mess brought about, created by a portion of the followers of the Lord Mohammad.

There is no way to get a word in edgewise when it involves those who call on Islamic dogma. The disciples of (Mohammad) have the boulevards to impose their doctrine. It is flagrant when you see all the accommodations made for their pleasure, when one lists all the waivers given to them, even if these go against the essence of French values. It is an incredible thing in a country like France, all those who find fault, in every manner, muzzled, ordered to return back into the ranks of dhimmitude.

(Those who are) anti-Islam are left in the lion’s den when those who never cease imposing their vision of the world are supported with force by much of the media, anti-racism associations (or rather followers of stupidity), as well as political parties on the right as well as the left, without forgetting a good part of our dear elected (officials). Don’t forget those. They are so charming when it comes to defending the indefensible, and so acerbic with those looking truth in the face. Islam is a deadly doctrine.

I should not forget to say that on our territory, the same as with any Western country, a believer in Islam is called a Muslim. He is respected in his belief. He lives his faith normally, nothing is imposed upon him. On the contrary, we bend over backward that he may continue to be what he wants to be.  We don’t call him a renegade, infidel, apostate, ungodly, Kafir, or whatnot. Why? Because we are not in the presence of a totalitarian system like that of Islam, which imposes its teaching upon everything. We are in a secular country where each can believe in what he wants, yes yes, even the tsetse fly if he likes. We are in a country where religious affairs are a private matter, of freedom for each one. It is the exact opposite, as opposed to Islamic doctrine, which imposes itself on all individuals, both in the private sphere as well as public. All human laws are inspired directly by the Koran, from sharia. Each precept is obligatory, there is never a dispensation. Everything is taken as is without asking questions.

Moreover, in Islamic countries, one does not talk of individuals, citizens, or very little. One speaks of Mohammadans, the believers, the faithful, the Muslims, which amounts to saying that one could not be anything else.

Thus, a simple person who does not adhere to the message of Mohammad is covered in the most humiliating words, each more condemning than the other, contrary to Muslims’ experience in non-Muslim lands. More than damning words, the rebels risk prison, torture, even outright death.  Let Muslims show me where they risk this in the West! Nowhere! The certitude is there!

It is for that that I forcefully refute the words, “apostate”, “infidel”, “ungodly”, and everything that relates to the disbelief in Islam. I mark by this rejection my refusal to see the world through the prism of Islam, the Koran, which says it is a crime to not believe, which affirms the obligatory and sacred character of this religion, which makes the non-believer a criminal, which places the worst upon the rebellious. Rejecting the word, “apostate” is therefore not a posture, but a militant act to say “Stop” to the criminalization of non-believers, “Stop” to the terror, “Stop” to the impossibility of living outside of Islamic prominence. Stop!!!

That is why, in a cynical way, at the beginning of my remarks, I defined those who live in Muslim lands and do not believe in Islam, apostates, infidels, in order to highlight the dictatorial side, contemptuous of the beautiful religion of peace, hallelujah, of love, hallelujah, and certainly tolerance, self-evident.

By the way, the term, “Muslim lands” is itself another absurd affirmation of this totalitarianism. In effect, many countries under Muslim hegemony were Islamicized through force, by the sword, I cannot repeat it enough. That is far from the myth of Islam accepted by conviction and by spirituality. The reality is quite different, despite the denial of numerous Mohammadans. From the moment where the doctrine of Mohammad arrives somewhere, we always know how it has ended. The populations have no other choice but to submit, given the barbarity of the soldiers of Allah and the bloodshed. The invaded territories are transformed, reluctantly, into Muslim land where nothing else can really exist, nor anything more from the past-or so little- can subsist.

And yet, nothing is simple with Muslim lands; there are those who clearly show their colors and those who play hide and seek, wanting to present an image of tolerant, free, democratic countries. Yes, some Muslim countries try to make us believe this nonsense. They do it shamelessly, without embarrassment, in view of everyone. The Mohammadan hypocrisy in all its splendor, shouting, exhibiting, assuming without any remorse. I would say this is the history, the essence itself of Islam, advocate everything and its opposite in the most normal way; moreover when caught with its hand in the bag, cries scandal, conspiracy. Doesn’t that remind you of something? This is the attitude of many Mohammadans in France seen over and over. They (are) a nuisance, but it is the others, those who denounce- (they are) the guilty ones. These behaviors run through the veins of Islam; it is like this that they disarm their enemies, not otherwise.

So look at this country where hypocrisy is the rule, Algeria, an Islamic shithole, where everything is based on sharia but wants to make you believe that it is a State respectful of freedom of religion. Look elsewhere, see the ubiquitous side of article 42.12 of its constitution which says,”Freedom of conscience and freedom of opinion are inviolable. The liberty to practice religion is guaranteed in respect to the law”.

For the Democratic and Popular Republic of Algeria, a pompous title, if there ever was one, guaranteeing religious liberty is through prison sentences and heavy fines. It is through arbitrary arrests and mock trials expedited in 4th gear, where one applies the law to their own opinion. That is why I wish to address all Algerians in France who always whine about the miseries they suffer so much as Muslims.  What do they say about these people who are arrested because they simply affirm they are   not Muslims? If they just claim that they do not believe in the message of the Koran, of Mohammad, the hadiths, the sunna, it is jail that awaits them with routine beatings by cops and their fellow prisoners, yet it is they who are the worst thugs. In this mess, better to be a bastard, a  crook than a person refusing Islam. The former have better treatment than the latter.

What do they say about what happens in their dear Algeria?

As recently as November, yet another affair showing the darkness of the Algerian state, a Muslim country structurally anti-non Muslim. As soon as you say anything about this pseudo-religion, you are accused of insults against the Prophet, violations of the precepts of Islam, and more, and in less time than it takes to say it, you are behind bars, without much chance of escaping a guilty sentence. Yes, the activist, Mourad Mechri, originally from Chabet El Ameur, a coastal town, knows something about it. He was arrested November 9 at his place of work at Boumerdes for his Facebook postings criticizing Islam. He is languishing in one of these charming prisons of the Islamic world, havens of respect for the rights of man. There is liberty Algerian style. Isn’t it beautiful? Imagine yourself not doing any better in France!

This man was wrong in believing that he could speak loud and clear his feelings vis-a-vis Islamic doctrine in complete safety. Lost! How can you imagine a Muslim country, which it is, could tolerate that? How can you be fooled at this point? Definitely, it is to integrate the impossibility of freedom in a society founded on the Muslim religion.  Both the state authorities and a large part of the population are there to call to order every contravention of sharia, the dogma of the camel driver. Ultimately, the phantom articles of the constitution are nothing but smoke screens, there to give the illusion of the individual respect of everyone, there where Islam says in substance, no question, never, even in dreams!

So I assume the right to not give a damn about the recriminations of some Muslims living in the Western world.  Like my first shirt, I don’t give a damn about their so-called difficulties in practicing their religion. All of this, for me, is nothing more, nothing less than propaganda and downright manipulation to further advance their Islamic pawns on the Western chessboard. Let’s take it for granted!!!