Our history shows there’s a dark side to ‘Buy American’

Trump’s program might sound appealing. But the Buy American exhortation follows a long history of similar campaigns steeped in racism, especially against Asians and Asian Americans, that have had real, destructive consequences. It’s not that the Buy American call is racist in itself — there’s nothing wrong with seeking to reinvest our dollars back in good local jobs. The problem lies in the way in which it frames the issues.

That’s the Washington Post, just one of many news outlets calling the plan raaaaacist, mean, isolationist, and many more mean words. Now, though?

Biden set to sign ‘Made in America’ executive order 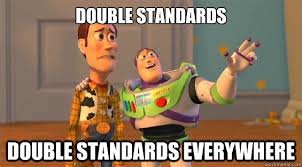 President Joe Biden is set to sign a “Made in America” executive order Monday, fulfilling a long-time campaign promise to increase the amount of federal spending that goes to American companies.

The announcement comes at a time when the government is set to spend expansively on efforts to defeat COVID-19, and after a period during which vulnerabilities in the U.S. supply chain were exposed as state and local governments resorted to foreign manufacturers to obtain desperately-needed personal protective equipment.

The federal government spends about $600 billion on contracting per year, and there are already rules in place governing how taxpayer dollars can be spent, how much foreign products can be purchased, and how many foreign components can be brought to the U.S. and assembled here. However, waivers and loopholes allow even more foreign product to be purchased than the rules state.

Biden’s executive order will aim to close those loopholes and cut down on the waivers, as well as order an increase in domestic content. It will also redefine what can count as domestic content, create a public website so U.S. companies can more easily see government contract business and determine whether they could make a more competitive bid for it.

I have nothing against a buy American plan, even from Joe (though, the devil is always in the details, right? You never know with a nutty leftist), but, the difference between the reception for Joe’s plan and Trump’s is astounding. The Washington Post isn’t complaining now. Nor are any of the usual suspects. Even the Auto Workers Union was called racist when they called for buying American.

I’m looking forward to all the double standards over the next four years.