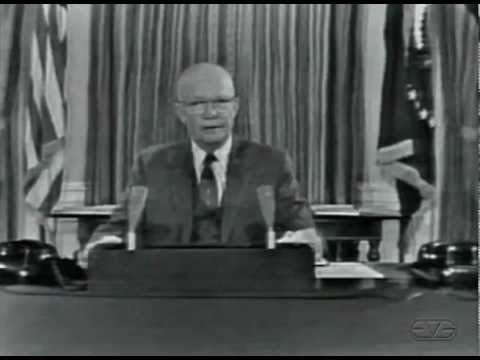 Four days before turning the presidency to John F Kennedy, President Eisenhower delivered a speech that is remembered because of one line:

“In his farewell address to the nation, President Dwight D. Eisenhower warns the American people to keep a careful eye on what he calls the “military-industrial complex” that has developed in the post-World War II years.
A fiscal conservative, Eisenhower had been concerned about the growing size and cost of the American defense establishment since he became president in 1953.
In his last presidential address to the American people, he expressed those concerns in terms that frankly shocked some of his listeners.
Eisenhower began by describing the changing nature of the American defense establishment since World War II.
No longer could the U.S. afford the “emergency improvisation” that characterized its preparations for war against Germany and Japan. Instead, the United States was “compelled to create a permanent armaments industry” and a huge military force.
He admitted that the Cold War made clear the “imperative need for this development,” but he was gravely concerned about “the acquisition of unwarranted influence… by the military-industrial complex.”
In particular, he asked the American people to guard against the “danger that public policy could itself become the captive of a scientific-technological elite.”

First, the speech is worth reading. It shows how thoughtful and serious our 34th president was. He was a pre-television man and used the word rather than the image to make his point.
Second, President Eisenhower was concerned about corruption, or the close relationship between the defense industry and members of Congress.
Last, and not least, it was not the anti-military speech that so many in the left make it out to be, as David Greenberg pointed out:

“Eisenhower’s fears about standing military power never outweighed his conviction that it was necessary.
As Ledbetter writes, Ike was, “by any definition, a leading figure in that complex.”
He loved the Army and devoted his life to it.
Within the Republican Party, his great accomplishment was to drag the rank and file into the age of internationalism with his triumph over Robert Taft for the 1952 presidential nomination, which isolated the isolationists in the GOP.”

Overall, a good speech that should be read for what it said, i.e. spend wisely and watch for corruption.
It would be wise for a president today to deliver a speech but warn us about “the public-sector unions” and their influence on our politics. The corrupt relationship between the public-sector unions and elected leaders is more dangerous than the military industrial complex ever was, is, or will ever be.P.S. You can hear my show (CantoTalk).