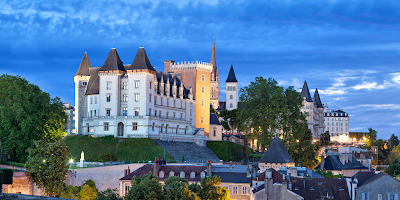 Another day-another innocent murder victim at the hands of an asylum-seeker in Europe. Today, it is France. An immigration officer at an asylum-seeker facility in the southwestern town of Pau (Atlantic Pyrenees) was stabbed to death by a Sudanese man who was pending deportation. The below article from France TV Info is translated by Fousesquawk.

Murder in asylum center at Pau. Aggressor charged and imprisoned

Caption below photo: Flowers on the (fence) of the reception center for asylum-seekers (Cada) Isard-COS of Pau on 20 February 2021

The Sudanese, 38, alleged perpetrator of a deadly attack on Friday, has been placed in provisional detention at the remand center at Pau, the State prosecutor of the town said Sunday.

The prosecutor’s office at Pau announced on Sunday, 21 February that a 38-year-old Sudanese had been placed in custody for murder and imprisoned. He is suspected of being the alleged perpetrator of a deadly attack of an official of the asylum center of Pau (Atlantic Pyrenees), which occurred Friday.

At the end of his custody, which had been prolonged Saturday, the man appeared Sunday before a judge. (The judge) charged him and placed him in provisional detention at the Pau remand center, stated the State prosecutor of Pau, Cecile Gensac.

The man is being prosecuted for having attacked with knife blows (13 wounds have been identified) the head of the reception center of asylum-seekers (Cada) Isard-COS at Pau, where he had been placed a few years ago. The victim, a 46-year-old father and social worker with experience in asylum cases, died of his wounds shortly after the attack.

Destined for imminent expulsion due to convictions for violent (crimes)

In France since 2015, and beneficiary of an international protection subsidiary status up to last November, the respondent was destined for an imminent expulsion due to convictions for violent crimes that earned him prison time between January 2017 and August 2018.  At the end of 2020, he had not responded to two summons to notify him of the end of his residence permit.

During his (interrogation), the man explained to the investigators that he “harbored resentments” against the Cada-Isard-COS of Pau and felt “that his situation had not been correctly handled,” the prosecutor stated Saturday. Fearful of being sent back to Sudan at war, he had come Friday to obtain from this agency, “a paper addressed to the attention of Ofpra (French Office for Protection of Refugees and Stateless Persons) to allow him to remain in (France)”, according to the magistrate.

She stressed that the suspect was, “neither reported nor on file  in the context of violent radicalization, and the (information) gathered makes it possible to rule out any terrorist intention.”