Mother Jones senior editor Michael Mechanic has written an engaging, informative, entertaining, and insightful forthcoming book Jackpot: How the Super-Rich Really Live—and How Their Wealth Harms Us All. Like actual jackpots, however, it loses a little luster after what might have been a winning beginning. 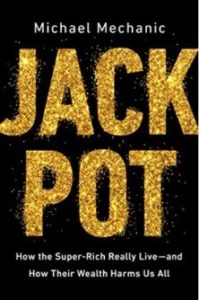 As the subtitle tells it, Mechanic’s book has two purposes. The first, to tell us how the super-rich “really live,” has a little Lifestyles of the Rich and Famous to it and is (thus?) a gently humor-tinged look at life for those with a lot more money than most of us. Too much money.

“This is the American fantasy: the jackpot,” according to Mechanic in Jackpot. “The windfall. The exit. The payday.

“But seldom do we interrupt our reveries to contemplate the social, psychological, and societal complications that come with great affluence and the reality that so few possess it,” he writes.

There might be a liiittle populism lurking around in Mechanic’s exploration of those complications, actually, what with its decrying of a privileged “economic aristocracy.” Some at the conservative American Compass would find it of interest, one thinks.

It is not angry, however. Perhaps “playing against type” for a good Mother Jones’er, Mechanic nicely evidences some sympathy for many of the people in those much-different, and supposedly better, financial circumstances than ours.

“Coming into money in a culture that’s obsessed with it will alter your reality,” according to Jackpot.

“And that might be very good. “It might also be very, very bad.” Readers learn of new and almost entirely unforeseen “business and complex investments to oversee, philanthropic strategies to think about, and properties and personal employees to manage.”

Many of Mechanic’s details are, well, funny—in a human-nature sort of way, not necessarily a ha-ha one. It is, for example, apparently “really tough to sell a Rolls-Royce now without the Starlight Headliner,” a $12,000 addition to an already about $450,000 car that gets you “thousands of tiny LEDs embedded in the ceiling leather to approximate the night sky.”

Residential real-estate “showings are by appointment only, ‘otherwise it’s a petting zoo,’” a high-end San Francisco realtor tells Mechanic. We meet a Boston-area psychologist who “spends his days helping super-rich clients and their children grapple with their wealth anxieties.” We visit with the most-elite concierge medical, travel, and, well, anything-the-rich-need/want service providers.

There is increased access to receptive celebrities and policymakers, Jackpot shows. There are growing entourages to help properly oversee, and maybe also enjoy, the same glow. There are existing and would-be financial, tax, travel, philanthropic, educational, college-admissions, and even matchmaking consultants and advisors. There’s a “family-office” industry.

There are the children, always causes for love-borne parental worry.

More largely, there’s a materialism that strains the bonds of family and civil society. There are trust issues. Then there are financial fraudsters and personal safety about which to warrantedly fret, too. And there are always even-richer people, which is a thing. It’s all there in Jackpot.

“In some ways, being very rich and very poor are strangely similar,” Mechanic notes.

Just as having not enough money creates fear and anxiety, so can having more than you know what to do with. At both ends of the spectrum, money tinkers with our notions of self-worth, our egos, our social lives, the stability of our marriages, our relationships with children, parents, and siblings—even our mental health.

He later sympathetically writes that a “layperson perusing the literature on wealth and behavior would likely conclude that wealthy people are assholes, but that’s really not fair.”

As Jackpot works its way to its second stated purpose, though—to tell us how the super-rich’s wealth harms us all—there’s no such “playing against type.” He seems to revert to form, laying out a social-justice agenda that does not necessarily flow naturally at all from everything in the book up until then.

There’s talk of the “stakeholders” in capitalism, for instance. There are the seemingly obligatory harsh critiques of Citizens United in particular and “the kinds of policies that produced this mess in the first place” in general, including wealth-protecting and -perpetuating tax policies. There are forceful chapters on “Thriving While Black” and “Women on Top.”

In an also-strong chapter on “Giving It Away,” Mechanic writes, “the way philanthropy is practiced in our country not only favors the rich, it can actually exacerbate the estrangement between rich America and poor America.” He refers to “the Big Philanthropy juggernaut,” which is made up of unaccountable, taxpayer-subsidized, private charitable foundations that are “beholden to nobody” and “can amass unlimited assets and exist in perpetuity.” He says “Big Philanthropy remains profoundly undemocratic, yet the public and our elected leaders rarely complain anymore.” Consider our interest at the conservative Giving Review piqued. (We’re looking for friends.)

For Jackpot’s concluding chapter, Mechanic includes much from his interview of liberal Ford Foundation president Darren Walker, in which Walker restates his thesis in From Generosity to Justice. Walker, with others, thinks charity includes aggressively seeking justice through governmental activity, including regular old massive spending, but also using its coercive tax and regulatory powers.

Like his portraits of the actual rich and famous, Mechanic’s portrait of Walker—an “icon of philanthropy” with a personal “rags-to-riches tale” of his own who humbly talks to Mechanic “at a conference table stacked with books about art, politics, and famous Black people”—is quite sympathetic, too. Substantively, too sympathetic, actually.

There’s a lot of luster off Jackpot’s winning beginning by the time the book concludes with a two-page “Resources” section at its end. Maybe too much lost luster, actually.

The section lists organizations that the rich can support and/or join, and to which they and everyone else can turn, for effective education, activism, and advocacy to pursue progressive social-justice issues and aims. It doesn’t ruin the book, but it definitely plays to type.

Underscoring an unfortunately missed opportunity, the list sure makes a skeptical conservative reader wonder about what the book’s primary purpose, and audience, was all along—as does a (proudly pinned) January tweet from Mechanic about being “honored” that Jackpot is seen in a photograph on the desk in front of Sen. Elizabeth Warren. “I hope you find it worthy, Senator,” he says. I hope so too, but maybe more could have found it so.

This article first appeared in the Giving Review on April 8, 2021.