The tide of the school reopening wars must have turned because Randi Weingarten, head of the American Federation of Teachers (AFT) and leading advocate for school closures, has changed her tune and now says, “There is no doubt: Schools must be open. In person. Five days a week.”

A Tune Change That Isn’t

The problem is that this statement isn’t a change in tune once one understands the word games that Weingarten and other teacher unionists have employed since the beginning of the COVID-19 lockdowns. Weingarten herself Tweeted recently: 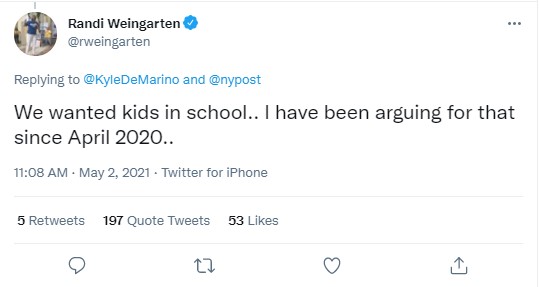 Now, anyone who has followed the issue of school reopening understands that statement to be unadulterated bovine excrement. Not a lie per se, but “bullshitting”—speaking “characterized by a particular kind of indifference toward truth.”

To better understand Weingarten’s particular brand of bullshitting, once again we turn the BBC political-comedy classic Yes, Prime Minister. Sir Humphrey, the chief civil servant advising the prime minister—think of him as the incarnation of a benign-if-ineffectual “deep state” interested only in maintaining its cushy status quo against public-spirited reform—is a master of using delay, circumlocution, and technicalities (see this clip for one such) to tell the prime minister what the prime minister wants to hear while retaining the power and decision-making of the civil service.

Ignore Everything Before “But”

Delay, circumlocution, and technicalities are exactly how one should interpret all of Randi’s statements on school openings. After all, Weingarten and the AFT heavily lobbied the CDC to secure very restrictive guidance on schools, which many union-controlled school districts used to maintain part-time or even full-closure policies in Spring 2021.

Nobody should buy it. First, even for next year, her full-time posture includes several anti-science preconditions, such as distancing and smaller classes. These are the same excuses teachers’ unions leaned on this year to keep the school doors locked. But it’s mostly an attempt to conceal the role they played over the past year in advocating against the needs of kids.

In short, Weingarten’s “change of tune” that isn’t comes with the same hyper-literalist “but” that her statements supporting “reopening” since April 2020 have come with. Like Sir Humphrey in the television show, she is hoping that public officials and parents who might be inclined to confrontation will take the easy way out and go linguine-spined by trusting her dubious assurances.

Parents and public officials should not trust Weingarten’s assurances; no one should. Weingarten and her union know that they can play word games with the lives and educations of children because they maintain a stranglehold on the education system. They have a near-monopoly on school provision and school governance subject to an iron triangle of battleship-armor strength, with teachers unions all but selecting the counterparties with whom they will negotiate.

The only way to break that iron triangle is to break unions’ monopoly on education provision. More and more states are choosing to do that by funding students instead of union-controlled education monopolies. May many more follow.