First, Ahmad Saleem, a community organizer for CAIR in Florida, was busted after showing up to molest what he thought was a 12-year-old girl he had met over the internet. When Ahmad showed up in a car with a plate, “Invest in Children”, the cops were waiting for him instead.

The son of Pakistani immigrants had headed up the local Muslim Students Association at the University of Central Florida before moving up the ranks at CAIR. Then it was off to prison. 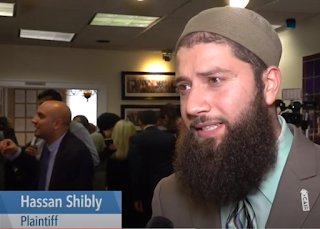 Now it’s Hassan Shibly’s turn. The Syrian immigrant who headed up CAIR Florida was accused of assaulting his wife, threatening to kill her, and sexually harassing CAIR employees. Shibly was also accused of threatening some of his accusers, and trying to pay them off.

An NPR article noted that CAIR leaders had been aware of the accusations as far back as 2016 and that no action was taken. “CAIR National has a history of turning a blind eye to many incidents over the years, and the information is coming out. No NDA will save them from what’s to come,” a former CAIR employee tweeted.

A forum for CAIR victims on Instagram quickly filled up with stories of a CAIR chapter head who “was found to be sexually harassing a member of staff and other women also complained about his behavior” only to be protected by the local CAIR governing board, a CAIR leader grooming an employee into a sexual relationship, a CAIR leader using “his religious belief that men can have 4 wives to manipulate women into having affairs with him behind his legal wife’s back”, and a “lawsuit with an imam and a little girl.”

This kind of thing happens a lot.

When the various Islamist groups set up by the Muslim Brotherhood and similar networks operate in this country, they use the laws of Sharia that they intend to impose on Americans.

Two years ago, Zia ul-Haque Sheikh, a former ISNA board member, and the Imam at the Islamic Center of Irving, was accused of sexually exploiting a 13-year-old girl. He allegedly tried to marry the girl, when she came of age, even though he already had two wives at the time.

Also at the Islamic Center of Irving, a security guard was accused of molesting a third-grader, and there was an incident of a foreign man kissing minors at the mosque.

Sheikh’s accuser claimed that she had reported this to the president of the Islamic Center of Irving board, Nouman Ali Khan, who “discouraged her from sharing what she experienced because it would harm Sheikh’s reputation.”

Khan, an Islamic preacher and a Pakistani immigrant, had headed up the Bayyinah Academy before being accused of latching on to troubled women at Islamic events and then exploiting them. The Islamist cleric had frequently appeared at ISNA and other Islamist events, and had previously defended the Sharia practice of lashing those accused of immoral behavior.

Sheikh Usama Canon, the Islamic cleric who founded the Ta’leef Collective, had been a frequent speaker at CAIR and ISNA events, an instructor at the Islamist Zaytuna Institute, and an advisor to the Inner-City Muslim Action Network (IMAN).

Canon, a black convert to Islam turned preacher, was ousted after allegations of sexually inappropriate behavior that included grooming women. He still remains involved in various Islamic institutions and organizations including the Downtown Islamic Center of Chicago.

Muslim feminist activists insist that the answer is more female leadership, but Linda Sarsour, probably the most prominent female Muslim activist in America, was herself accused of enabling sexual harassment back when she was working at the Arab American Association.

“She oversaw an environment unsafe and abusive to women,” a former employee, who claimed to have been repeatedly groped, alleged.

The Islamist apples rarely fall far from the tree.

Tariq Ramadan, the grandson of the founder of the Muslim Brotherhood, and probably the leading Islamist figure in the West, has been accused of raping a series of women.

Ramadan’s alleged assaults took place in Washington D.C., in Paris, London, and major cities around the world. The victims who have come forward included a disabled convert to Islam and former teenage students: including one as young as 14 years old.

The disabled woman described meeting Ramadan after a conference on Islamophobia and Palestine before he beat her, raped her, and then urinated on her.

Abuses happen in all religions and among secular intellectuals, but Islam is unique in that its theology provides a license for sexual abuse. A number of the Muslim leaders caught in the #MeToo moment employed the toolbox of Sharia law to perpetrate their abuses. They used the legal fiction of “temporary marriages” to force women into illicit affairs and the codes of a religion whose founder married a 7-year-old girl and where children are married off well before they hit puberty to justify abusing underage girls. And the Islamist infrastructure around them, tapping into the Sharia demand for multiple witnesses to a rape charge, ignored their accusers.

Rape and sexual abuses can happen in a variety of settings, but Islam is uniquely built to justify and protect behaviors that are crimes in the United States, but normative in the Muslim world.

The #MeToo scandals of Islamism are just symptoms of the fundamental divide between two civilizations and their accompanying value systems. The Islamists had always intended to build a state within a state. And within their organizations and communities, the state within a state operates under Sharia law, with legal, but no moral accountability, to the United States.

After 9/11, America’s Islamists increasingly came to align with the Left. The unspoken conflict between Sharia and feminism has yet to explode out into the open because there is too much at stake for both sides. But the #MeToo scandals at CAIR and other Islamist groups are a fracture point between two ideologies that are hostile to America, but also to each other’s values.

The miniature clash of civilizations within the political infrastructure of multiculturalism is coming.

Islamists have injected their policy priorities, support for the Muslim Brotherhood, hostility to Israel, hijabization, and opposition to fighting terrorism, into the Left. But the Left has also injected its own values, including feminism, into the Islamist political infrastructure.

Leftists and Islamists allied in Egypt, Algeria and Iran, among many other places, to overthrow establishment governments, only to have those alliances come apart in blood and tyranny.

The American alliance between Islam and the Left may meet the same end.