Israel is a not a war zone because of geopolitics, but because it shares a common crisis with Europe, America, Russia, China and numerous other countries, most of whom are trying to buy time for their own internal Islamic insurgencies by siding with the Jihadist insurgency inside Israel.

A sizable hostile minority within your borders is always an explosive element, but Islamic migration is unique in that it emerged and still emerges from a tribal and religious manifest destiny of world conquest. 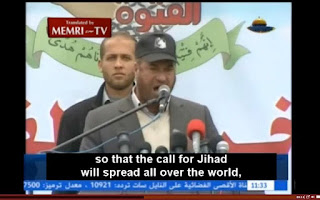 Israel’s Islamic minority is particularly hostile because unlike those of America, Europe, Russia, and China it came to the Jewish State as a conquering force and made up the ‘Herrenvolk’, the colonial master race, within living memory (religiously, if not ethnically under the Ottoman Empire). The hostility was fed by a succession of foreign powers, Britain before and after WW2, Germany in WW1 and WW2, by Russian during the Cold War, by Iran, Qatar, and Russia after the Cold War, but it’s still innate.

Tribal hostility is bad enough as even a brief look at Rwanda and African genocides, or those in the Balkans ought to show, but combine that with Islamic manifest destiny and you have a perpetual war.

While the legal fiction that is the international community has kept on pressuring Israel to “resolve” the conflict with territorial concessions, providing the insurgency with dedicated territory has worsened it.

Nor have any of the nations or alliances pressuring Israel to resolve the conflict managed to do it.

The responses have ranged from integration and appeasement in America and Europe,  Russia’s efforts to convince its Muslims that they have a common enemy in the West, and China’s ruthless crackdown. What all these varying efforts have in common is trying to convince or compel a Muslim population to see itself as part of the local nation or empire, to bind its destiny to European liberalism, to the Han Chinese, to Greater Russia, or to American democracy, and not to a global Ummah of which it is a fragmented piece.

Israel’s strategy of integrating the Arab Muslim population within randomly defined borders, convincing them to see themselves as part of the Jewish State, while treating those outside those borders as autonomous is even more paradoxical and contradictory than these same failed strategies.

The fragmented Muslim populations of the world are the remnants of an aspiring empire created by centuries of conquests and invasions. Islam convinces them to see themselves as part of that Ummah, a civilizational empire that is meant to encompass the world. Tribalism sharpens the edge of that religious hostility by giving it a personal edge and a familial aspiration.

Critics say that Muslim terrorism kills more Muslims than non-Muslims. That’s true, but not much of a defense.

Islamic manifest destiny has traditionally destroyed Muslim societies comprehensively, but then again Roman imperialism and European colonialism destroyed their own societies quite thoroughly. Globalism usually destroys any society arrogant enough to be infected by the fever which is one reason why America is so endangered. It’s also why China has survived for thousands of years by xenophobically turning inwards at key moments in its history. That’s why China is likely to leave the scene within the next generation, taking its ‘prizes’ and going home, or will destroy its own society.

Israel doesn’t have that option.

The Jewish State isn’t suffering from an Islamic insurgency because it wanted to operate on a global scale, but because foreign invading powers, most notably the Syrian-Greeks and the Romans, imposed their dominion using Arab mercenaries. When Byzantium declined and fell, the barbarians they had been using to keep the peace turned on the Eastern Roman Empire, just as the barbarians Goths had turned on the Western Roman Empire, and assembled together a religion from the scraps of Judaism, Christianity, and assorted local pagan faiths based on their imperatives of conquest and domination.

The Islamic conquests failed to assemble any kind of global utopian empire. But then they never had a chance of doing that. They did however destroy countless peoples, eliminate many cultures, and create broken mirror images of the original Mohammedan Jihad with little emirates ruled by little Mohammeds. And they killed countless millions and ushered in a thousand years of tyranny and terror.

The fall of the Ottoman Empire revived Jewish hopes for reclaiming their homeland, but the Zionists had not counted on the endurance of that original war imperative or on the weakness of civilization.

And so the conflict continues.

It continues in Israel, in Europe, and in America, in Russia, and in China, and around the world.

The conflict has been particularly sharp in Israel because where Muslims are a minority in America, China, and (for a limited time before they become a majority) in Europe and Russia, they are a regional majority. And because of the strategic importance of the region, half the world has made it its business to intervene.

The Nazis shaped the Muslim Brotherhood and the Soviet Union shaped the PLO with their strategies, tactics, and organizations, so that Israel is fighting both the Communists and the Nazis in its own territory.

But underneath the overlay of Third World liberationism and genocidal nationalist antisemitism familiar from the Soviet and Nazi projects is the old Jihadist manifest destiny and its much older antisemitism.

And while National Socialism has yet to control a major government or play more than a marginal role in America or Europe (though not for a lack of effort by the new generation of ‘Hipster Nazis’ more familiarly known as the alt-right), Marxism is a major player in American and European politics.

So the campaign against Israel gets plenty of support from the Left. As does Islamic terror in general.

Israel faces a sharper version of the dual crisis of Jihad that the world does.

The first part of the crisis is an internal insurgency while the second part of it is the development of nuclear weapons by Islamic powers like Iran and Pakistan that can destroy civilization (aided and abetted by the familiar Russian, Chinese, and North Korean pipeline for Third World insurgencies).

The Jewish State has adroitly managed to form a temporary alliance through the Abraham Accords with some regional traditional Sunni powers that have become alarmed at the threat of both of Shiite Iran and Islamist transnational ideological groups like the Muslim Brotherhood, but Iran and the Brotherhood have a direct insurgency operating on its soil.

Combine that with the fall of the Trump administration and the rise of a pro-Iran and a pro-Brotherhood Biden regime in Washington D.C. and the current conflict was inevitable.

But it was inevitable anyway.

Iran, Qatar, and various other players have not been investing a fortune in Hamas and other terrorist groups just to have them sit on the money. After a certain number of years they start a war to test Israel’s defenses, military and diplomatic, leading to chaos, carnage, and a pressure for more concessions.

This time is no different. 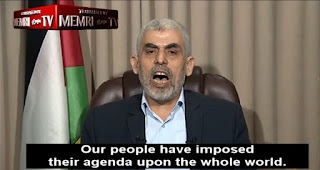 The roots of the crisis are ancient, but they’re also more recent. When confronting a civilizational Jihad, it takes only mistake. And a bad Israeli government mad that mistake in the 90s by agreeing to create an autonomous territory for the insurgents. Another bad government made another one a decade ago by withdrawing from Gaza and leaving it as a truly autonomous territory governed by Hamas.

Both moves were based on a fundamental misunderstanding of the resulting consequences.

Hamas and the PLO/Fatah, like ISIS, is no more capable of running a functional government.

Instead humanitarian NGOs, in this case UNRWA, provide some basic services for the population while the Jihad forges onward to kill and kidnap its enemies operating much like organized crime.

Israel hasn’t figured out how to resolve the problem. But neither has anyone else in the world.

And there may be no answer.

The world is facing a 7th century crisis and trying to deal with it through 21st century means.

Neither the modern nor postmodern way has done anything other than play into the hands of the Jihad.

Netanyahu, like other conservative Likud leaders, has appeared modern while eschewing modernity’s preference for pat solutions and postmodernity’s apologies and appeasement. And so Israel has been living in a premodern moment, adapting rapidly to circumstances as it has in some ways throughout its modern existence. But that’s a survival strategy and not a healthy one either.

Israelis tend to take each day as it comes.

Flying El-Al is very different than flying normal airlines. Everything appears unready even minutes before boarding. The orderly process of boarding by class and status in most airlines is present only in theory as everyone rushes to get on board. It seems impossible that this whole thing should work or that the plane should take off in time. And yet it does, more reliably than most airlines, and works out.

That’s Israel in a nutshell. And it’s a familiar observation for Americans in Israel.

Israelis are always in crisis mode and they take one crisis at a time, and what ought to be a shambles somehow turns around. It’s frustrating to the modern mind and many Americans can’t take it.

But that perpetual crisis mode, a legacy of thousands of years of Jewish history, may offer few lessons to the world. Crisis mode works until it doesn’t. And then the failure can be catastrophic.

Israel has fought an almost impossible war bravely, gallantly, and dashingly, jumping from one innovation to another, and then being miraculously rescued with that familiar certainty that neither it nor the Jewish people could exist without a G-d who intervenes invisibly at crucial moments so that the survivors of the ashes of the death camps went on to defeat enemy armies and found a nation.

But the world needs a better answer. 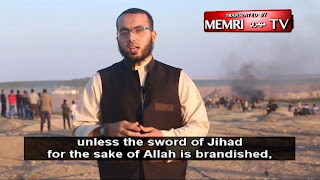 The answer may not be simple, but it begins with countries recognizing that they share a common problem and after generations of ‘bargaining’ with the Jihad, recognizing that we’re all facing the same war, and that across cultures and even political affiliations, the West and the East, Right and Left, we may be enemies, but we also share a common enemy. One whose assault civilization may not survive.

We can either unite against the Ummah, that embryonic empire of Sharia and Jihad, whose boundaries are those of the world, or we can cut our separate deals with its separate parts, which will all fail.

And then we will fail and fall with them.