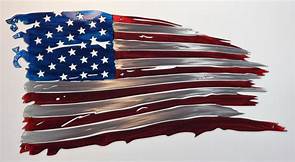 As of November 3, 2020, America has been hijacked and placed on life support. America’s founders—descendants of patriots who fled religious persecution and European monarchies—sought to set up a nation where all men were free. They set forth to create a government of the people and for the people with the consent of the governed. They declared that our rights did not come from man, but were God-given; thus no man can take away what was not theirs to give. The Constitution, the Declaration of Independence, and our Bill of Rights were the greatest legacy they left behind for future generations. This legacy guaranteed and solidified our right to live a life of liberty.

For the last few decades, we have watched the Totalitarian Left (Socialists and Communists) chip away at our framework. There were years during the Reagan and Trump presidency when we held them at bay, but here we are nearly 250 years after our founding and America is fighting for its very survival. While America continues to exist as an entity, much of the Republic has been erased.

Today, Americans are governed by an old senile con man who twice previously ran for the Presidency and lost, but we are to believe he garnished the largest amount of votes in American history without campaigning and while suffering from dementia. The vast majority of Americans do not believe Joe Biden is running the country. He is incapable! Thus, for the first time in American history, we have an outside force governing Americans without the consent of the governed. Likewise, our three branches of government have been compromised. Congress has the sole power to legislate, but the Biden administration has decided to bypass Congress and are determined to use pen and paper to execute over 100 Executive Orders in just over 100 days. Legislating from the Oval Office on matters that require the consent of the governed has been upended and what we have is executive tyranny. Our third branch of government, the Supreme Court, has the ability and duty to safeguard our checks and balances between the two branches, but they have abdicated their responsibility and are missing in action.

We can speculate as to who is really the power source behind the curtain, but one thing is for certain—it is not Joe Biden. While in the past there have always been subversive, treasonous, seditionist groups who sought the end of the United States, we had agencies in place to monitor them and erase them lest they succeed. That notion no longer holds true today. Our FBI, CIA, and Justice Department have been politicized and compromised. All three agencies sat for four years on evidence implicating the Obama administration for spying on President Trump’s campaign, as well as evidence in recent years implicating Joe and Hunter Biden’s corrupt deals in Ukraine and China. Hillary Clinton erased thousands of government emails (some classified) on her private server and she is still free. Congressman Eric Swalwell employed a Chinese spy in his office and he still sits on the Foreign Relations Committee. Instead of going after the political criminals who have actually harmed our country, all three departments went after those associated with President Trump for a litany of minor trumped up charges related to taxes and campaign contributions. We know John Brennan was a one-time Communist. How did a known Communist rise to be the head of the CIA unless the agency was already compromised when Brennan took over? Additionally, both Christopher Wray and Bill Barr did not attempt to rein in corruption within their departments and instead aided the overthrow of our government with their silence.

A free country is dependent upon a free press and media, but with the exception of a few, the mainstream media and leading papers are an arm of the Democrat Party. The DNC creates the talking points for the day, and their counterparts at CNN, the New York Times, and the Washington Post will repeat the same talking points. Nancy Pelosi once spoke of the Wrap-Up Smear while on camera. For example, someone at the DNC will mear a particular politician, CNN will reference the DNC, and when asked, the DNC will reference CNN. That way, it has the appearance of legitimacy. One can say they have each other’s back but they clearly don’t have America’s back. When Americans today want to read and hear the truth, they turn to foreign or alternative sources. No longer can Americans trust mainstream American sources for news coverage.

Same for Big Tech! Who could have imagined a corporation having the power to silence a President of the United States—but Big Tech has prohibited President Trump to from being heard on their platforms, and they get away with it because too many members of both branches of Congress have taken big donations from these private corporations, which now control them and ultimately control us. Yes, we have a First Amendment, but our freedom of speech is only as good as those willing to uphold it.

Our Second Amendment is still in place, but the Marxists are chipping away at it by limiting manufacturers’ ability to manufacture ammunition. What purpose will a gun serve without the needed ammunition. The Marxists don’t need to engage in gun confiscation when they can eliminate the ammunition. The Deep State swamp understands that Totalitarianism and Marxism ultimately rest with a defenseless population.

In the process of erasing our institutions, Marxists have successfully undermined and transitioned our Western Civilization—with its emphasis on faith, love of country, and family—to a culture of tribalism, debauchery, and hatred for America. Only 75 years after the liberation of Europe from fascism and totalitarianism by American forces, today’s youth are learning in American public schools not the merits of American principles and values, but a false narrative of American history that portrays America as a systemically racist imperialist power. In today’s America, we have an ongoing war against our police—who risk their lives each day to enforce the rule of law—by an American media bent on portraying segments of our population as victims of unchecked oppression. Citizenship is no longer an ideal, and with a deliberate open border that no longer delineates our sovereignty, illegals believe they are entitled to benefits once reserved only for Americans.

In today’s America, there are no longer two biological sexes; sexual identity is no longer binary. Popular culture promotes the concept that a man can choose to be a woman, and visa-versa. Homosexuality, an abomination in the Bible, is now celebrated. Pronouns such as “he and she” are outlawed in various jurisdictions and settings. The American family consisting of a mother, father, and children in the home has been replaced by whatever strikes a person’s fancy. Uncouth foul language once deemed shameful and disrespectful is now an everyday staple in the press, media, film, music, and all genres of popular culture. The use of four-letter swear words is considered “cool” by today’s trendsetters, and the more explicit they are, the “cooler” the image. White America, and especially white men, are now automatically stigmatized for the color of their skin by a “woke” society that deems minorities of every color outside of “white” as morally superior to white males. Middle America, once the backbone of American exceptionalism, is being systemically erased throughout blue urban areas by Marxist policies favoring an elite corporate oligarchy and the destruction of small businesses.

America today is unrecognizable from the America of yesterday. At best, it is on life support. Whether America can be resuscitated and reclaimed remains to be seen. There are American patriots working behind the scenes to right the wrongs, end the corruption, restore America, and reclaim it for We the People. They are the “truthtellers”—demonized by Big Tech and the Corporate Media, but hailed by patriots. It is imperative we get on board, support our patriots, and fight back. We have a country to save!

Shari Goodman is an educator and activist. Her work has been featured in American Thinker, WorldNetDaily, Israel Today, the Los Angeles Times, and other publications.