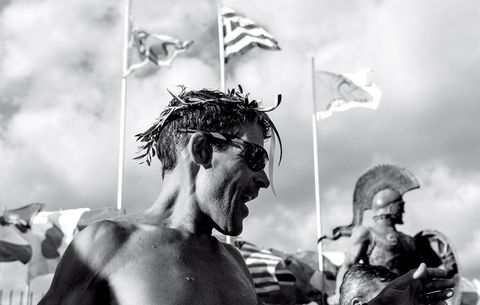 I named my Whippet the same while in grade school, but imagine those today would draw a blank if mentioned his name.

Ultramarathoner Dean Karnazes visits his ancestral homeland for the truth about the original “marathoner.” Think you can handle it?

Many runners are familiar with the story surrounding the origins of the modern marathon. As the well-worn legend goes, after the badly outnumbered Greeks somehow managed to drive back the Persians who had invaded the coastal plain of Marathon, an Athenian messenger named Pheidippides was dispatched from the battlefield to Athens to deliver the news of Greek victory. After running about 25 miles to the Acropolis, he burst into the chambers and gallantly hailed his countrymen with “Nike! Nike! Nenikekiam” (“Victory! Victory! Rejoice, we conquer!”). And then he promptly collapsed from exhaustion and died. Turns out, however, the story is bigger than that. Much bigger.

The whole idea of recreating an ancient voyage was fantastic to me. Looking for an excuse to visit the country of my ancestors, I signed up for the little-known Spartathlon in 2014, an ultramarathon from Athens to Sparta that roughly follows the path of the real Pheidippides. It felt like the right way to tell his story—the actual story of the marathon. Here’s what I discovered: