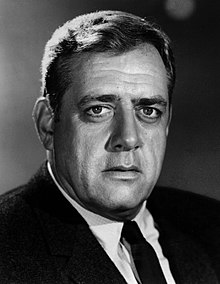 Back in 1956,  Burr was in Cuba working on “Affair in Havana“.     Burr played “Mal Mallabee”, a rich businessman confined to a wheelchair as the result of a boating accident.  Mallabee hired an investigator to look into his wife Lorna (Sara Shane) who is allegedly having an affair with Nick Douglas, an American living and working in Cuba played by John Cassavetes.
Catch “Affair in Havana” the next time it’s shown on the retro channels.   I won’t tell you more about the plot.
The movie will take you back to a time when Americans worked and invested in Cuba without fear of confiscation, totally functional pre-Castro Cuba.
After that movie, Burr applied for the role of “Perry Mason” .   He won the audition and started that show later in 1957 and it became one of the most popular TV series ever.
I recall my late father saying that he saw the show in pre-Castro Cuba.  I remember watching the show in Mexico overdubbed in Spanish.

Burr had another popular series called “Ironside”.   It was good but I think most of us remember him for those Perry Mason shows.