Now, imagine if a Conservative group blocked all the White House entrances: they would be called domestic terrorists and the city would deploy lots of cops and ask for the National Guard 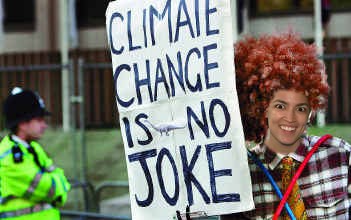 Protesters from the Sunrise Movement gathered outside the White House to tell President Biden that he is not “fulfilling his climate promises.”

“We need this infrastructure bill to meet the intersecting crisis this country is facing,” the group tweeted. A photo that was shared on the group’s Twitter account claimed to show Secret Service agents arresting some members at the White House’s entrance. Some of the signs read, “#NoClimateNoDeal.”

She does know she can submit specific legislation in the House for her climate crisis (scam) beliefs, right? How’s that Green New Deal going? The one she submitted in February 2019 and still hasn’t demanded a vote on.

it’s always a justice party when @CoriBush has the mic

Is she a protester or an elected Representative? Will she give up her own use of fossil fuels to fly to and from NYC? Of course, it doesn’t seem she spends much time in her district talking to her constituents.

Ocasio-Cortez cautioned Biden against compromising on a bipartisan infrastructure package, calling on the White House to avoid being “limited by Republicans” on the size and scope of the next economic spending bill.

“In those areas where there is agreement, Republicans are more than welcome to join so that we can get this work on infrastructure done,” Ocasio-Cortez said during an interview on NBC’s “Meet the Press.” “But that doesn’t mean the president should be limited by Republicans, particularly when we have a House majority, we have 50 Democratic senators and we have the White House.”

She should remember that Democrats won’t always control Congress and the White House. And not to whine when the GOP pushes stuff through in this manner.