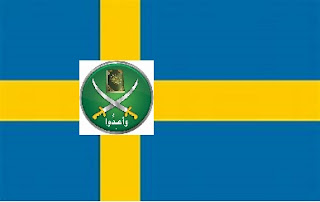 Faith and solidarity: Give Muslim Brotherhood a clear and obvious place

Ever since the mid-1990s, the Muslim Brotherhood has established itself in the Social Democrat party. As Lidarsidorna was earlier able to report, the Brotherhood has its principal seat through the Islamic Association in Sweden and particularly through Stockholm’s mosque, whose current imam, Mahmoud Khalfi, was nominated for political positions of trust after the 1994 Stockholm municipal election.

Khalfi has himself affirmed the mosque’s direction as belonging to the Muslim Brotherhood in several of his own statements, which have been noticed by researcher Sameh Egyptson. IFiS’ (Islamic Association in Sweden) earlier spokesperson, Mahmoud Aldebe, has also confirmed the ideological direction through his own description of the Brotherhood in Sweden.

The clearest example of how this seemingly warm relationship between Social Democrats and the Brotherhood has grown is the trip that was made in 2011.

In March 2011, on the initiative of the Brotherhood movement, a delegation made up of Viola Furubjelke, head of the delegation, Mariam Osman Sheriafy- SD Board of Directors, Alaa Idris, SSU (Swedish SD Youth Association), Chakrib Benmaklouf, president of European Federation of Islamic Organizations (FIOE), and Ulf Carmesund, international secretary of Brotherhood Movement, traveled to Egypt to gain information on the situation in the country after the riots at Tahrir Square. Among other things, meetings were held with representatives of the Muslim Brotherhood who later won the subsequent election through their political party.

Viola Furubjelke is ex-member of Parliament (1985-2002) and chairperson of the Foreign Affairs Committee. From 2005-2008, Furubjelke was general secretary for Olof Palme’s International Center.

FIOE, of which Benmaklouf was chairman at the time, is the Brotherhood’s European umbrella organization and was founded by, among others, IFiS.

Among other things, Weiderup said that Social Democrats would accept that Muslim party members mainly held homophobic values in a debate article in SVT (Swedish State Television) Opinion. His reasoning was that these members had not come as far in their political and democratic development as Swedish Social Democrats.

The Brotherhood’s influence is clear. Far lesser known is that Faith and Solidarity, in connection with Egypt’s current president’s seizure of power, urged the Egyptian military regime to normalize relations with the Muslim Brotherhood.

A Brotherhood that, during the election and its short time in power, persecuted other religious minorities, explicitly expressed that they wanted to destroy the state of Israel, as well as introduced wide-ranging, repressive religious laws.

In a press release signed by Peter Weiderud, in his capacity as chairman from August 19, 2013, after Brotherhood President Morsi was overthrown, Faith and Solidarity wrote:

“The interim government must create a real dialogue wherein the Muslim Brotherhood gets a clear and obvious place.”