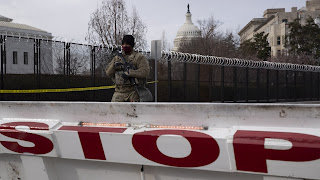 US Capitol Police is setting up offices in San Francisco, California and
Tampa, Florida with more offices country wide.

By federal law, the US Capitol Police jurisdiction is limited to the
Capitol as described in PUBLIC LAW 102-397 OCT. 6, 1992

The move is supposedly in response to “threats” against members of
Congress.

The FBI, which has customarily handled such threats, has offices in San
Francisco and Tampa and is subject to the FREEDOM OF INFORMATION ACT

The Capitol Police are not subject to the FREEDOM OF INFORMATION ACT.

The Capitol Police answer only to whichever political party is in power
in Congress.

Those who have been arrested on suspicion of participating in one
illegal manner or another in the January 6th Capitol incident are being
held without bail and are said to be held in solitary confinement.

The insurrectionist terrorists who burned and looted to the tune of
several billion dollars and repeatedly attacked federal courthouses have
been and are being set loose without bail and without charges being
filed.

The Capitol Police said in a release that they are obtaining “campus
surveillance” technology (they already have surveillance capability),
there are allegations that the technology being obtained is from the
Army which was used to develop activity patterns of terrorists in Iraq
useful for tracking down and eliminating said terrorists.

This has the markings of a national secret police force and Pelosi’s
fingerprints are all over it.

One police agency doesn’t willy-nilly set up shop in another department’s
jurisdiction.

Be aware that sometimes a web search for the law regulating USCP
jurisdiction brings up a page concerning something to do with
immigration. One PDF format results in four pages, another in three. No
Script reacts to a percieved clickjack, just enable the appropriate
button. The 4 page rendering needs to be “turned” via the forward and
back buttons, the three page is in the same tab – scroll up and down.

USCP media release: After the Attack: The Future of the U.S. Capitol
Police

This is something that needs to be taken up with elected officials at
the federal, state, county and municipal political levels as well as the
CHP (state police), county Sheriffs and municipal police departments.
The first response from sub-federal level political office personnel
will usually be “we don’t have jurisdiction over the Capitol Police” -
jurisdiction, sovereignty, the tenth amendment and the other problems
will usually need to be explained to whomever the aide taking the info
will be.

Piece as I originally wrote it:

It has been announced that the Congressional Capitol police are opening
offices in San Francisco, California and Tampa, Florida with expressed
intent to do the same in other states. The excuse is “threats,” one leg
of the tripod smear and justification stool along with “racism” and
“sexual harassment.”

What is the Capitol police?

It is a federal law enforcement agency who’s jurisdiction by federal law
is within the Capitol seat of the federal government. The Capitol Police
is subject to political bias and agenda like a municipal police
department is subject to the same from any city council. The first
session of the 177th Congress on January 13, 2021 in the House of
Representatives rendered H.CON.RES.6, which directed both Sergeants at
Arms and the Capitol police to any actions necessary to prevent
President Trump from entering the Capitol.

The House of Representatives, the Senate and the Presidency are all held
by the extreme far left. What does this portend for individual and
societal rights under the Constitution with the Capitol Police turned
loose on the country?

The Capitol police department is headed by the Capitol police board
which is comprised of the House and Senate Sergeants at Arms and the
Architect of the Capitol. The Sergeants of Arms are elected to their
offices by their respective Congressional chambers, the Architect of the
Capitol is nominated by the President and confirmed or rejected by the
Senate. All three can be immediately removed from office with little to
no notice by the Speaker of the House And Senate majority leader.

The House Speaker’s influence over the Architect is what led to the
swift erection of “Fort Pelosi,” the barrier fence which surrounded the
Capitol Building soon after the January 6th disruption.

The Capitol police is not subject to the Freedom of Information Act,
what could possibly go wrong with Pelosi dictating their operations?
It’s taken 7 months for the name of the Capitol officer who murdered
Ashli Babbit to come out.