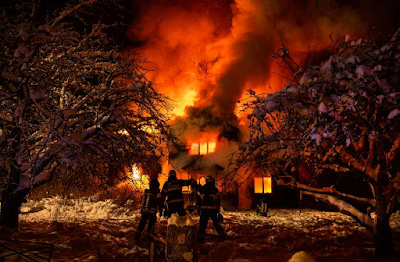 In February, we reported on a horrific incident in Sweden, where three teenagers harassed an elderly woman then set her house on fire, whereupon she burned to death. The incident occurred in a municipality called Nässjö, in Jönköping County.

As usual, the authorities and media have gone out of their way not to identify the culprits or reveal their nationality. For what it is worth, Nässjö is commonly referred to as “Little Mogadishu”.

ANNEBERG: On Friday, a 17-year-old boy for setting a villa on fire in Anneberg in Nässjö municipality and killing a woman who lived there. SVT reports that he is sentenced to 4 years in juvenile custody for murder and arson.

The crime occurred on February 1st of this year. The 17-year-old admitted that he set the fire which caused the total destruction of the house and the woman being burned inside, but maintains that he didn’t think the woman was left inside and that he had the intention of killing her.

The Eksjö District Court condemned him for murder and arson as well as aggravated theft, vandalism, and harassment, and the punishment is 4 years in juvenile detention. He will also pay 180,000 kronors in damages to the woman’s relatives.

“That is a reasonable punishment, which corresponds to life in prison for an adult,” says Prosecutor Helene Thomasson to SVT.

Before the fire started the 17-year-old and his two companions harassed the 68-year-old woman. They followed her to her home and shouted curse words at her and spat at her, among other things. The woman called the police, who came, but by then the trio had left.

The two accomplices are sentenced to juvenile detention and youth service for harassment and also for violation of the law for protection from accidents since they did not sound the alarm for the fire.

Fousesquawk comment: It makes one wonder what the life of an innocent 68-year-old woman, burned to death in her own home, is worth.