We should be thankful that Merrick Garland was never sworn in as a Supreme Court Justice, but he’s only slightly lower in power as Attorney General. 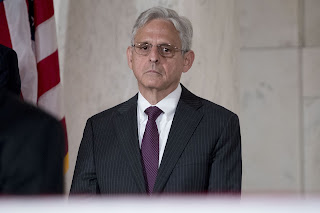 This week he has instructed the National Security Division (which was formed in 2005 under the Patriot Act) to team up with the FBI to investigate what he and his boss Joe Biden have termed Domestic Terrorism. Is he talking about ANTIFA or the BLM? Surely you jest!

NO he’s talking about parents of children who appear at school board meetings nationwide to voice their opinions about how their children are being treated in the Covid mask mandates, critical race theory, and sexuality classes. He seems to think that rather than voicing their First Amendment Right to free speech they are violent individuals.

He seems to believe that the very meetings that the School Boards are forced to endure are no an avenue for parents to voice an opinion. You can clearly see even through their collective masks that the Board members sit smugly behind their desk and limit comments to 15 minutes after that they disrespectfully cut the speaker off mid-sentence. 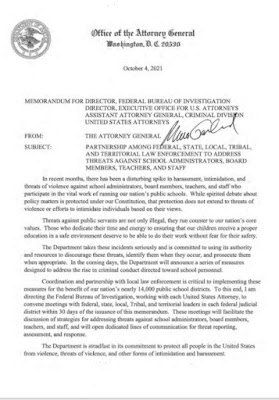 Garland has also said in his letter, that they intend to redefine what a threat actually is!

Now we find out that Garland’s family intends to make millions of dollar on the Critical Race Theory teachings, no wonder he is pushing it!

The Department of Homeland Security, DOJ, FBI, and the National Security Division were all formed to protect America from those who wish to do harm to us, not to label parents who don’t agree with School Boards as Domestic Terrorists!

The liberal Media in true socialist fashion is towing the line for such shenanigans by merely regurgitating the same talking points as if they are fed the same key words and phrases by the Biden Regime.

This Garland Statement is uncalled for and just one more sign that there are NO three letter Government Agencies that are unbiased, they have all become a weaponized group of the left wing!