“A single, ominous question now hangs over the White House: What could possibly cause President Trump to put the interests of Russia over those of the United States?” Senator Schumer insinuated in 2018.

Why is Schumer putting Russia’s interests ahead of those of the United States by blocking Nord Stream 2 sanctions on Putin’s pet pipeline into Europe? 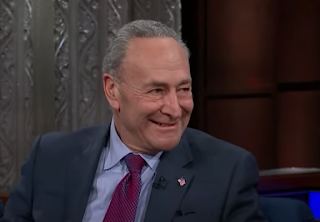 Schumer, along with a number of other top Democrats, is a beneficiary of campaign contributions from top Democrat fundraiser Vincent Roberti whose lobbying firm was paid over $8.5 million by Nord Stream 2 which is owned by Putin’s state-run Gazprom energy monopoly.

Roberti, a former Dem politician, has maxed out his donations to Schumer and to Rep. Eric Swalwell, who may have been cheating on Fang Fang with Vladimir, and threw in a generous $171,000 to the DCCC, as part of the over $545,000 donated to the Democrat political machine.

The top Dem bundler is reportedly lobbying on “issues related to the U.S. position toward the Nord Stream 2 pipeline, including potential financial sanctions affecting the project.”

Suddenly, Schumer, who was accusing the GOP and Trump of being in bed with Putin, and demanding that they vote on sanctions, was refusing to hold a floor vote on Russia sanctions.

“Millions of Americans will continue to wonder if the only possible explanation for this dangerous behavior is the possibility that President Putin holds damaging information over President Trump,” Schumer had smeared back then. What damaging info does Putin have on Chuck?

President Trump, at the time, had urged that, “we should start an immediate investigation” into Schumer’s ties with Russia, and described him as a “total hypocrite”. That is an understatement.

Three years ago, Schumer was clamoring that putting off sanctions on Russia, “is an extreme dereliction of duty by President Trump, who seems more intent on undermining the rule of law of this country than standing up to Putin.” That describes Schumer in a nutshell.

But not just Schumer.

“With him, all roads lead to Putin,” Pelosi had ranted. “I don’t know what the Russians have on the president, politically, personally, or financially.”

Roberti plowed $46,100 into Pelosi’s Victory Fund. He also appears to have maxed out his contributions to the House Majority Leader and gave $5,000 to her PAC to the Future.

That’s not too shocking since Pelosi toasted Roberti and his wife at their wedding.

“Trump denial of Russian collusion rotten at core and doomed to unravel,” Senator Richard Blumenthal had tweeted. “Expect more serious convictions and indictments early in 2018 as the Special Counsel climbs the ladder of criminal culpability.”

The serious convictions and indictments, along with the criminal culpability, unraveled.

Meanwhile Roberti maxed out his donations to Blumenthal.

“Yet another reason to call for an independent prosecutor into the #TrumpRussia ties,” Senator Catherine Cortez Masto tweeted after having accused President Trump of endangering national security.

Roberti also maxed out his contributions to Masto.

Senator Patty Murray had called for “a special prosecutor to examine the Trump campaign’s ties to Russia”.

Murray, like Schumer and Mastro, got the maximum amount from the Nord Stream 2 lobbyist, along with Senator Maggie Hassan, who had also demanded a special prosecutor for Trump.

Senator Cory Booker alleged that President Trump had “betrayed” his role and that he was “weak and submissive” to Putin.

The New Jersey hack, who always has one hand out, got a cool grand from Roberti.

But the real lobbying effort to stop the Nord Stream 2 sanctions is coming out of the Biden White House with top associates of the notoriously corrupt politician pushing Senate Dems to let Putin have his pipeline. And that’s after Biden shut down the Keystone XL pipeline for America.

Roberti is a longtime Biden pal who boasts of having advised him on his 2008 presidential bid and reportedly flew him out to his hometown during the campaign.

Another Biden donor and lobbyist working for the foreign companies that partnered on Nord Stream 2 signed a check to Biden’s victory fund that Democrats refused to return until they were shamed into doing so by the New York Post.

“Where are the Republicans who know in their heart the president is giving away the store to Vladimir Putin?” Schumer had demanded.

Where are the Democrats who know Biden is giving away the store? Cashing their checks.

Secretary of State Blinken claimed that refusing to sanction Putin’s pipeline would “rebuild relationships with our allies and partners in Europe.” Had a Trump administration cabinet member said something like that, we’d already be in the middle of three investigations, one by the FBI, another by the CIA, and a third by Rep. Adam Schiff’s poolboy, but no one cares now.

There’s no more talk of special prosecutors and no suggestions that Putin is rigging elections. Not when a lobbyist for a Swiss company owned by the Putin regime is signing the checks.

There are no more of Schumer’s “ominous questions” when the answers are all too clear.