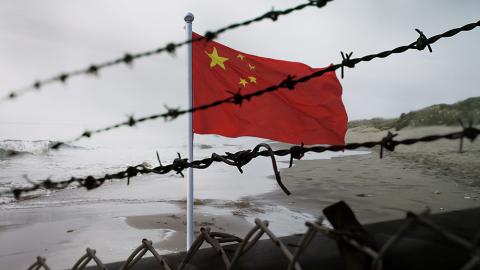 The Democrats will never leave office peacefully. They never retool their failed policies, they simply break the rules or try and change the rules. Attempts to change the filibuster, pack the court, etc., are proof of this assertion.

I used to ask the question, what will the Democrats NOT do to lose power along with their communist stranglehold on power. The answer is that there is nothing they will not to do to retain power.

In order to retain power, the Democrats have divided up America into segments and pitted them against each other:

6. Democratic Party vs everyone else

7. The state vs Christians

There are at least two other designations that the Democrats have pitted against each other. They are afraid they would unite. However, the Democratic stranglehold over people and institutions that the Democrats have taken for granted have come to the forefront and are rejecting the Bolshevik Communist takeover of America. One case in are the voting block of Hispanics. They are naturally conservative. The Biden administration have declared parents who are against any of their policies (eg Critical Race Theory) to be Domestic terrorists. As a culture, Hispanics are very family orientated. Subsequently, their support for the Biden administration has fallen by over 50%.  Black voters are turning their collective backs on the current administration by a third. Just look at the report I produced about the historic civil rights reformer, Bob Woodson and what he says about the Biden administration:

Even diehard Democrat, Senator Sinema is turning her back on these dictatorial policies of the Democratic Party by refusing to endorse the elimination of the filibuster, the Reconcilliation Bill and packing the Supreme Court.

The country is split. If this were divorce court, we would call this a case of a irreparable and broken marriage.

John Moore the host of the John Moore Show and a former Green Beret. I’m in my fifth decade of professional involvement with the Criminal Justice System. Up until a few years ago, a person accused of committing a crime was just a “criminal suspect” and the crime itself was just a “crime”. Now it can also be a “hate crime” or “an act of terrorism” as if the additional verbiage makes the crime worse, more heinous, or deserving some special treatment, or additional punishment, over and above what this crime would be worthy of otherwise. Of course, the person accused is no longer just a criminal suspect. No, he or she is now a “Suspected Domestic Terrorist”. As a side note, through the ease and (for us older folks) near magic of Netflix, I’m incrementally watching the entire “Twilight Zone” series from the late 1950′s, early 1960′s. I watched many of them when they were originally broadcast. If there was a 1960 Twilight Zone episode portraying American adult men and women wearing PJ’s in public, bodies covered in tattoo’s, pieces of metal piercing their faces, nearly all adults being obese, men and women wearing tee-shirts as socially acceptable outer garments, about half of all adults being semi, or completely, illiterate, about 1/4 of all adults with prescriptions for psychotropic drugs, 8% of all adults being diabetic with nearly 50% being pre-diabetic, where 73% of 18 to 25 year old’s are either too fat, too dumb, too unhealthy, or have criminal records thus being unable to qualify for any branch of the U.S. Military, homosexuals can marry each other, sexual deviants are allowed to enter the locker rooms and restrooms of the opposite sex, our precious young women being raised to believe that they should embrace, as a fact, the concept of their being able to face a full-grown man in hand-to-hand combat as part of the U.S.M.C. or U.S. Army, et cetera, the show would have been regarded as a wild fantasy from the minds of Rod Serling and the show’s writers. Obviously, we are sadly (and quite literally) living that fantasy in the early 21st Century. May God help us.

If the Democrats determine that they will not win in either 2022 or 2024, they will not leave office peacefully. They have over 2 million terrorists in America, plus Antifa and BLM that will do their bidding.

What will they do?

1. Silence the opposition, which they have done and the DOJ is going back to the tech companies to complete the task of permanently silencing people who are Christian, conservative and love America.

3. The roundups will be preceded by a series of false flag attacks and then open warfare.

4. In the final stage, the Democrats will bring in the United Nations under the Kigali Principles, with 28 nation signatories, plus the CHICOMS, and brutally subjugate America. If one looks at FM 39.4, it will be foriegn troops that are running the FEMA (ie extermination) concentration camps.

5. According to the Deagel report, 200 million Americans will die.The body count will commence with the unvaxxed. They will soon be assigned their equivalent of a J Stamp, Nazi style and the progression steps to genocide will commence. However, it will not stop with this demographic. All opposition and the elderly will be attacked. Why the elderly? Because they cost these Fabian Socialists money with Social Security and Medicare.

6. A weakened America will be attacked and permanently conquered by CHICOMS and Russians and they have announced that they will not be taking any prisoners.