“The whole aim of practical politics is to keep the populace alarmed (and hence clamorous to be led to safety) by an endless series of hobgoblins, most of them imaginary.”

In this post, I’m going to point out a few of the lies and some of the misinformation surrounding guns in general and the venerable AR-15 rifle in particular. 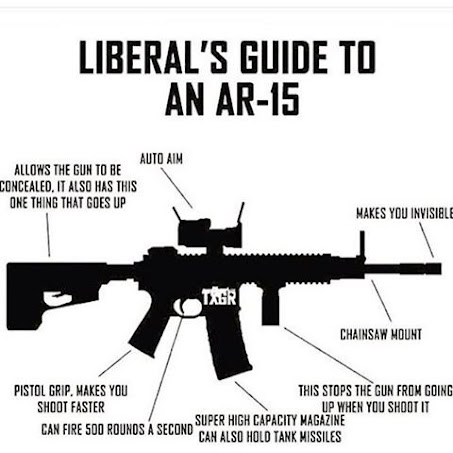 The AR-15 rifle is not an assault rifle.

: any of various intermediate-range, magazine-fed military rifles (such as the AK-47) that can be set for automatic or semiautomatic fire.

–my underline– Below was added to the definition years later.

also : a rifle that resembles a military assault rifle but is designed to allow only semiautomatic fire

The AR-15 is not capable of automatic fire, which is the true defining characteristic of an “assault rifle,” nor are the bullets fired through it any more damaging or devastating than bullets of similar size and velocity fired from any other rifle.

I have often said that if a word can mean anything you want it means nothing. So we find ourselves with no agreed definition.

George Orwell said, in an essay titled “Politics and the English Language,” the following about words that have “no agreed definition”:

Words of this kind are often used in a consciously dishonest way. That is, the person who uses them has his own private definition, but allows his hearer to think he means something quite different.

Prior to the publication of a 1988 booklet about “assault weapons,” Google Book’s library of books and other publications revealed no results that use the term “assault weapon” to describe a semi-automatic rifle.

The following people have described semi-automatic “assault weapons” or “modern sporting rifles” as  “fully automatic weapons” or “weapons of war”:

– Will Drabold, Time Magazine, 2016, “assault rifles” that have “widespread availability” in the U.S.

A wooden spear, to a spear with a fire-hardened point, to a napped flint stone tip, to a javelin with a iron point.

A bow and arrow through all its various iterations to a crossbow which was termed a weapon so horrible that it would end warfare  — by the Catholic Church –.

The evolution of the modern firearm begins in 1364

The truth is that any weapon that is practical for protection or self-defense, in form or function, is an adaptation of a weapon that was developed for military use and thus a “weapon of war.”

AR means, ArmaLite Rifle, which was developed by Eugene Stoner for the ArmaLite Corp, then was redesigned and modified by the Colt Firearm Company for the US military as the M16 rifle and then the M-4 variant.

The AR-15 Is Not Suitable For Hunting?

Not true. The AR platform is suitable for hunting and offers a wide variety of different chamberings and calibers for different purposes, including hunting. Most states do not allow the 5.56 mm cambering — the primary chambering of the AR-15 — as a suitable game cartridge for medium sized game — deer, elk etc.– as it is under-power and does not ensure a “clean kill.” But the issue at hand isn’t about hunting, and I see nothing about hunting in the Constitution of the United States.

The gun control narrative depends on raw emotion, raw fear, so that people will demand action from lawmakers, who will, in turn, be too afraid to not pass gun control.

Lies our President tells us:

This is stupid beyond belief!

Twisting of facts and figures to promote a narrative!

Sure, you’re not coming for our guns /sarc. But gun registration always leads to gun confiscation. We gun owners argue in good faith, and the next day you are back demanding more “compromise.” To what end?