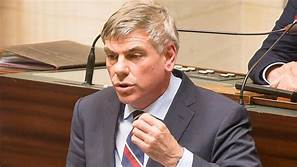 Felip Dewinter is one of the leading figures of the Flemish political party, Vlaams Belang (Flemish Interest) in Belgium, a conservative, Flemish-oriented party that is opposed to mass Muslim immigration into Belgium. Recently, he appeared in a TVinterview with Ongehoord Nederland (Unheard Netherlands) a conservative site also opposed to mass Muslim immigration into the Netherlands.  In this interview, Dewinter discussed his recently-published book on the topic of population replacement. It appears that the Dutch counter-terrorism department NCTV) has opened an investigation into Dewinter at the request of several political parties in the Dutch parliament.

The below article is from the Vlaams Belang website and is translated from Dutch by Fousesquawk.

The Dutch Coordinator for Counter-Terrorism and Security (NCTV) is opening an investigation into Vlaams Belang (Flemish Interest) parliamentary member Filip Dewinter due to his comments on replacement theory on Dutch television. With this, not only is democrat debate on the topic of repopulation prevented, but also criminalized,” says Dewinter. “Therefore, I will ask the Dutch government not to conduct this investigation.”

The Dutch state secretary for Culture and Media, Gunay Uslu (D66 party), has ordered the Dutch Coordinator for Counter-Terrorism and Security (NCTV) to open an investigation into Vlaams Belang parliament member Filip Dewinter. On May 10, he was a guest on the Dutch television channel Ongehoord Nederland (Unheard Netherlands) to speak on his most recent book. It was here that he spoke about the demographic change in Flanders and Europe and used the word, “repopulation”, in which the native population is replaced, and the way of life of the immigrants will (take on a leading role). The decision of the Dutch government came at the request of a majority of the Parliament, consisting of the D66, VVD, PvdA, Green-Left, PvdD, Christian Union, Denk, Volt, and Gundogen List.

“With this so-called investigation, the impression is created that I, directly or indirectly, would incite violence and terrorism,” says Dewinter. “This is not only totally laughable, but it also prevents the NCTV from doing what it was created to do, namely, the prevention and combating of real terror. Apparently, according to the Dutch government, legitimate statements from a democratically elected politician are more dangerous than the permanent threat from Islamic terror.”

“The Dutch investigation is an attempt to stifle democratic debate”

By criminalizing my book, “Repopulation: The great replacement” they refuse to conduct a democratic debate on the topic, and they place my ideas outside of democracy,” states Dewinter. “In this manner, the Dutch government is trying to influence and disrupt the decision-making and political debate-also in neighboring Flanders.”

Dewinter doesn’t plan to stop here and will contact the Dutch ambassador about this investigation and will ask the Dutch government to cease in the interest of democracy and good relations with Flanders.

Fousesquawk comment: This is highly troubling and should come as a warning to us here in America who mistakenly think that Western European nations enjoy the same freedom of speech that we do here. Such is not the case. The Dutch government, headed by Prime Minister Mark Rutte has been increasingly accused of abusing its government powers in a variety of subjects ranging from immigration, Covid, housing, and forcing farmers to reduce their livestock in the name of protecting the environment. As I write, Dutch farmers are in a state of near revolt as they protest the government’s actions with protests and disruption of traffic on the nation’s highways. Meanwhile, as hundreds of thousands of Dutch citizens are on a waiting list for public housing, refugees go to the front of the line as the country’s reception centers are overflowing.

And for those people, like Dewinter, a member of the Belgian parliament, who speak out against the wave of Muslim immigrants, with its accompanying wave of crime, terrorism, religious intolerance, anti-Semitism, and increased social welfare costs, Western European governments are quick to open up investigations and prosecute them. Just ask Geert Wilders of the Dutch parliament, who has been repeatedly prosecuted for his statements opposing Muslim migration into the Netherlands.

How easily our freedoms can be taken away.