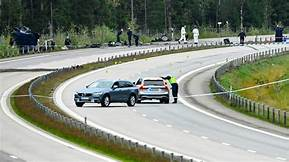 There is a new twist to last year’s accident that claimed the life of Swedish cartoonist Lars Vilks and two police bodyguards. Near the scene of the accident, a security camera recorded what sounds like three shots just before the crash. In addition, a spent bullet was found inside the car. Police cannot determine with certainty what the bangs were other than possibly the sound of tires blowing out. In addition, police state that the bullet had struck no hard surfaces and was possibly a bullet fired by one of the officers on a prior exercise, such as fired into a water tank and kept as a souvenir. In other words, they do not believe the bullet had been fired into the vehicle.

I have talked to a couple of my Swedish contacts, and they are of different opinions as to this aspect of the case. In my own opinion, for what it is worth, it would seem to me that when two cops are killed, the police will do as exhaustive an investigation as is necessary before ruling out foul play.

The below article from Dagens Juridik, is translated by Fousesquawk. The audio link to the sounds of the suspicious bangs can be accessed in the below link as well. A translated video is pending.

Mysterious bangs seconds before Vilks’ fatal crash-Listen to the clip

In the vicinity of the location where Lars Vilks and two policemen fatally crashed, there is a villa with a security camera.
In the audio of the security camera, which Dagens Juridik has had access to, just before the crash two bangs in rapid succession are heard.
Then there is silence for 5 seconds before a third bang is heard.
It sounds like shots.
“We don’t know what the sound is, but (we) have discounted shots because we found no trace of that in the vehicle,” says chief prosecutor Per Nichols.
It was in the afternoon of October 3 of last year. Artist Lars Vilks was with his police bodyguards en route from Stockholm to Skåne. They were riding in two Range Rover Sentinels, specially-built cars weighing over 4 tons.

In the first car was riding Lars Vilks, who was in the back seat and two policemen were in front. At 15:22 the first alarm about the crash came to 112.

The car in which Vilks was riding had crossed to the wrong side of E4 just north of the South Markryd junction and collided with a truck. The car “was wedged” under the truck, and a large fire broke out.

All three in the car died and were dead when the first rescue vehicle arrived. The driver of the truck was seriously injured but survived.

A witness, who had been passed by the car with Vilks just before the crash, stated that the Range Rover “was shaking”, that it began to smoke, and “vehicle parts (came off)” before the car first drove over to the right lane and then turned over the highway and collided with the truck in the opposite lane. The witness reported that the car was driving, “extremely fast” and estimated the speed at 178-180 kilometers per hour.

The other Range Rover, the following car, was so far behind the Vilks car that they did not see the accident. They came to the scene of the accident a good while after the crash-when the rescue services were already at the scene and did not understand that it was their colleagues who crashed until they saw a tire of the same type that they had on their own car.

“What happened on the highway was a tragic accident. We have conducted an extensive analysis with a technical investigation of the scene and witness statements. The security-classified car was checked and there was an analysis of the sound recordings. In summary, it is most likely that a tire blew out on the police vehicle, and then the driver lost control over the vehicle, which crossed over to the other side of the road and crashed head-on with the truck,” says chief prosecutor Per Nichols of the Special Prosecutor’s Office.

But there are several questions in the preliminary investigation.

When the police technicians went inside the heavily demolished car, a pistol bullet was found, that is, a fired “shot”, from what was apparently a 9mm  Luger.

The bullet has been examined and the technicians’ conclusion is that is a “trophy bullet”, which was fired in, for example, a water tank during an exercise by one of the policemen who was riding in the car and who had saved it. The bullet had not struck a hard surface, the forensic experts write, either before or after expansion.

Audio recordings from time of accident

In the preliminary investigation, there are also two audio recordings. In (one) of them, is heard what is described as “a tire explosion”, and there is also a sound that was captured after the accident when the car caught on fire. A half-minute after the tire explosion, sirens are heard from the first rescue vehicle which came to the scene.

But police have been unable to identify the sound in the first clip, the three bangs. “It cannot be stated what the bangs/puffs were,” it says in a memo regarding the NFC’s (Swedish National Forensic Center) sound analysis.

When Dagens Juridik spoke with the chief prosecutor, Per Nichols, he said that they discount that it was a gunshot heard in the clip.

How have you discounted that?

“We have looked for bullet fragments, explosive fragments, and so on without finding anything.”

But what is it heard there on the video?

Thus, gunshots are ruled out since they couldn’t find any traces of that- and at the same time, they state that the crash probably happened due to a tire, for unknown reasons, blew out. From the images in the preliminary investigation, it is deemed that at least two of the four tires were totally destroyed in the fire after the crash.

“The tires were badly damaged by the fire and the rubber was almost completely gone,” the technicians write in the report regarding the two rear tires.

Caption: One of the rear tires

In the police report of investigation, the sound clips are also mentioned. It states: “The vehicle, vehicle parts, and skid marks from the road have been forensically investigated in order to find any residue of explosive substances, No such substance has been found to date. The above-mentioned sound recordings have been analyzed by NFC which cannot state what the repetitive sound was caused by prior to the tires screeching.”

Listen to the sound clip here: