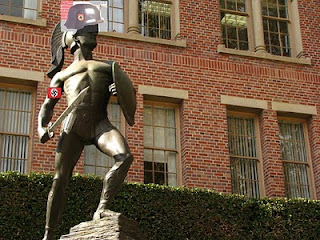 We have been following the ongoing story of Rose Ritch, a Jewish student at the University of Southern California who has been the target of the pro-Palestinian mob on campus because she supports the right of Israel to exist as a Jewish state. Therefore, she is considered a Zionist, which to the pro-Palestinian mob is a dirty word. Ritch was driven from her position in student government due to the attacks against her, many of which were flat-out anti-Semitic.

When USC President Carol Folt issued a statement expressing sympathy for Ritch over her ordeal and condemning anti-Semitism in general, the Middle East Studies Association jumped in to criticize Folt. You can read the background of the Ritch story here.

Now the Office for Civil Rights within the US Department of Education has decided to investigate the matter as to possible violation of Title 6 of the Civil Rights Act. I am cross-posting an announcement by the Louis D. Brandeis Center for Human Rights Under Law, which filed a complaint to the DOE/OCR.

This is a positive step although I have been critical of DOE/OCR’s resolution of the UC Irvine investigation several years ago as to complaints of anti-Semitism at that university. Hopefully, the investigators will realize that this goes far beyond the free speech right to criticize Israel. All too often, criticism of Israel, which is legitimate in itself, has crossed the line into insults directed at Jewish students and Jewish people in general on US university campuses. I know that from my own personal observations. I have seen it and heard it.