Sony, spurred by the success of Black Panther, decided to make the ‘Amazon’ Agojie warriors of Dahomey, the inspiration for the fictional female warriors of the comic book, into a movie.

The Woman King had a $50 million budget to bring the real Wakanda to life. It opened at the top of the box office as a black nationalist story of female empowerment about heroic slave traders. While a movie celebrating the Confederacy could never be made, African slave traders who sold hundreds of thousands of slaves and engaged in mass sacrifice are Hollywood heroes. 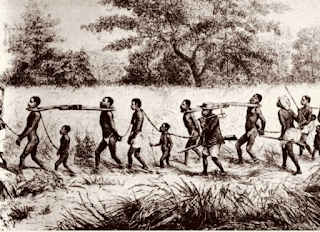 Despite the fact that the movie had originated with white actress Maria Bello of Coyote Ugly, Gina Prince-Bythewood, its half-black director, made sure “people of color” would be in charge during the production. Prince-Bythewood, who had been given up for adoption by her white birth mother and was raised by a white couple near the vineyards of Monterey, claimed that she cried about her “connection to the material” glorifying one of the worst slave trading tribes in Africa.

The Woman King’s absurd wokeness extended even to Prince-Bythewood claiming that she based the movie’s rape scene on “Christine Blasey Ford’s testimony at Brett Kavanaugh’s Supreme Court nomination hearing.” And the media was appropriately fawning.

But then the protests on social media began.

The Dahomeys and the female warriors had sold hundreds of thousands of members of rival tribes into slavery. They had also overseen gruesome mass sacrifice rituals of their slaves.

While black nationalist movies routinely ignore history, this one hit home with some descendants of slaves, especially those from the Bahamas. The slaves sold by the Dahomeys tended to be shipped to Brazil which was notorious for the mass death of black laborers. The slave ships intercepted by the British Navy however occasionally set the slaves free in the Bahamas.

The actual history of the Dahomeys of the ‘Slave Coast’ has sabotaged what was supposed to be a smooth rollout for The Woman King and its mingled tale of female empowerment and black nationalism. But while The Woman King’s feminist warriors were real life villains who helped enslave countless black people, there were real heroes who fought the slave trade.

While Black Lives Matter has conducted its own rampage in the UK, it was the British Navy that fought African and Muslim slave traders. In Dahomey and the Dahomeyans, Frederick Forbes, a British naval officer who had come to lobby the monarch to end the slave trade, described “guards of amazons” following in a procession behind a member of the king’s harem using umbrellas to shade her. One such umbrella was “decorated with 148 human jaw bones.”

When wealthy Dahomeyans were dying, they took some of their wives and slaves with them as human sacrifices. Large scale mass sacrifices were practiced, including the brutal and horrifying killings of hundreds to thousands of slaves to honor Dahomey’s monstrous monarchs.

One account from 1860 presented in Parliament described how “a great pit has been dug which is to contain human blood enough to float a canoe. 2000 persons will be sacrificed on this occasion.” Those killed were captives from other tribes where the “young people among these prisoners will be sold into slavery, and the old persons will be killed at the great custom.”

The New York Times reprinted a description of “thousands of people are being sacrificed, (decapitated and afterwards cut in pieces,) and thousands are kept for the slaves.”

This was the real-life Wakanda.

It was the British and the Americans who put an end to this nightmare through colonialism and imperialism. Even before the Civil War, the United States had signed the Webster–Ashburton Treaty (for Daniel Webster) under which the US Navy and the Royal Navy conducted patrols to intercept slave ships.

US Navy efforts to intercept slave ships actually dated back as far as 1820 when Congress passed the James Monroe Piracy Act. Importing slaves had already been banned under the Jefferson administration in 1807, but the Monroe Act equated the slave trade with piracy.

Any American who would “on any foreign shore, seize any negro or mulatto, not held to service or labour by the laws of either of the states or territories of the United States, with intent to make such negro or mulatto a slave, or shall decoy, or forcibly bring or carry, or shall receive, such negro or mulatto on board any such ship or vessel, with intent as aforesaid, such citizen or person shall be adjudged a pirate; and, on conviction thereof before the circuit court of the United States for the district wherein he may be brought or found, shall suffer death.”

Famous naval vessels including the USS Constitution, USS Constellation, and USS Yorktown hunted for and captured slave ships bringing slaves from Africa to this hemisphere. The Navy’s African Squadron cruising off the ‘Slave Coast’ and patrolling as far as Cuba managed to capture over a hundred slave ships.

But it was the British whose embargo of Dahomey and pressure on Brazil and Portugal proved especially effective in shutting down the slave trade. All those dead white men shut down the trade in slaves across the water. Later, the British imperialists fought to stop the land traffic in slaves through Egypt and to the Muslim Middle East. They were successful until the end of colonialism restored the old and new kinds of slave trade bringing cargoes of human beings from Africa and Asia to the Middle East where, as in brutal Islamic tyrannies like Qatar, they are worked to death much as they were before the dreaded days of European imperialism.

These are movies to be made and stories to be told about the British white men, long since dead, who put their lives on the line to stop the slave trade practiced by the heroic African feminist warriors of Dahomey. And those movies will never be made, because they don’t fit the narrative propounded by the 1619 Project and Ibram X. Kendi in which slavery was a European crime against Africa, rather than an Islamic and African tribal crime ended by Europeans.

Specifically, by the European imperialism and colonialism that liberals love to hate.

The scope of the African slave trade was massive. It encompassed much of human history and the known world. There were black slaves in China over a thousand years ago. The Middle East is dotted with large populations of former black slaves and in some cases current slaves. The American role in the slave trade was relatively brief in both historic scope and scale. It’s a sin, but it was certainly not, as Obama put it, our original sin. It was a crime that began in Africa.

Westerners did not invent slavery, but they did more than anyone else to put an end to it.

That’s a truth that cannot be told. And Hollywood would rather make movies celebrating slave traders, as long as they’re black women, than the dead white men who fought to end slavery.