Le sigh. I just cannot ignore the climate cult insanity. There are lots of dumb articles, even while the people of Florida are dealing with Ian

Hurricane Ian bears all the hallmarks of climate change 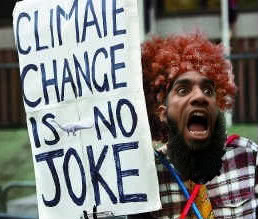 On Wednesday, Hurricane Ian barreled ashore Florida’s Gulf Coast as a powerful Category 4 storm packing 150 mph winds, submerging coastal communities in more than 10 feet of storm surge and dumping nearly two feet of rain in some locations. Two days earlier, however, Ian was just a tropical storm, and its rapid intensification is just one of the signs of how climate change has transformed how hurricanes behave.

Over less than 22 hours, from Monday to Tuesday, Ian got 67% stronger, the National Hurricane Center said. That dramatic escalation fits the pattern of one of the characteristics of hurricanes that scientists have shown is linked to climate change.

In fact, the number of intensifying storms in the Atlantic and Eastern Pacific over the last 40 years has increased by 25%, according to data from the NHC analyzed by the Associated Press.

That trend is occurring in part because ocean temperatures have risen as a result of humankind pumping greenhouse gases into the atmosphere.

Except, the same cult has made all sorts of different prognostications, like, there would be a whole lot more tropical storms and hurricanes, there would be less due to wind sheer from ‘climate change’, and others, all based on what the season had done, not what they predicted. NOAA is forecasted a likely range of 14 to 21 named storms, 6 to 10 could become hurricanes, 3 to 6 major hurricanes this season. The reality? 9 named storms, 4 hurricanes, 2 that achieved major hurricane status. Only 2 affected the U.S. Most fizzled quickly.

Did fossil fuels cause that? And there are a lot more. That’s just the start of the list

And this doesn’t take into account all those pre-1851 systems, when the population was very low and they weren’t really being measured.

According to the Associated Press, the Labor Day Hurricane of 1935 was a category 5 storm that devastated parts of the Florida Keys. It is believed to have been the strongest hurricane to make landfall in the United States, based on barometric pressure. AP reports the hurricane killed more than 400 people and became on the 10 deadliest storms in U.S. history.

Fossil fuels weren’t all that prevalent in 1935, and CO2 was well below the “safe” level of 350ppm. Was that hurricane ‘climate change’? If not, why? The answers will have not actual basis in science. And this all creates a problem, as I’ve written time and again: so many Skeptics agree with many of the end goals, but, we do not agree with the means, and all this cult insanity makes it hard to agree with doing anything. I’ve said I agree with going EV in the future, as fossil fuels are kinda dirty, excluding “carbon pollution.” I do not agree with the government forcing We The People to do this.

And, if fossil fuels are so bad, then why

The Biden administration said Wednesday it had granted approval of a limited exemption in federal regulations on cabotage — or the transport of goods — in order to allow a foreign ship to bring 300,000 barrels of diesel to Puerto Rico days after Hurricane Fiona battered the U.S. territory.

Why aren’t they sending wind turbines and solar panels? And EVs? It’s almost like fossil fuels are valuable, dependable, and easy.

The post Hurricane Ian Is Climate Crisis (scam) Or Something appeared first on Pirate’s Cove.