Obituaries for Ken Starr, who died yesterday, understandably will highlight his role in the Whitewater investigation that eventually led to the impeachment of President Bill Clinton in December 1998. But the former U.S. solicitor general and federal judge should also at least passingly be remembered as a successful legal defender of school choice in its early days.

With support from The Lynde and Harry Bradley Foundation, on the program staff of which I served, Starr defended the pathbreaking Milwaukee Parental Choice Program (MPCP) for the State of Wisconsin against legal attacks on it. The MPCP allowed parents to redeem government vouchers for tuition at any participating private school, of their own choice, for their own children’s education. The lawsuit, brought by the teachers’ union and its allies, challenged the program’s expansion to include religious schools among those where the vouchers could be used.

In the Milwaukee case, the union argued that “[s]tate taxpayer funds were flowing to private schools, which in Milwaukee (as in most cities) were predominantly religiously affiliated,” according to Starr in his 2021 book Religious Liberty in Crisis: Exercising Your Faith in an Age of Uncertainty. “Specifically, Catholic and Lutheran schools accounted for the lion’s share of private elementary and secondary education in Milwaukee. Only a handful of schools were ‘independent,’ or free from formal ties to a religious community.” 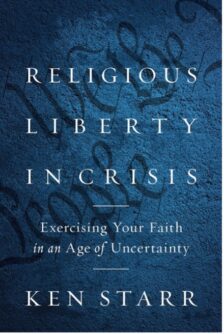 Starr writes that he “was deeply honored to be summoned by Governor [Tommy] Thompson to defend the voucher program.”

Thompson “knew well how to use the levers of power,” Starr recalls.

For starters, the Governor had “fired” Wisconsin’s duly-elected Attorney General (and future Governor) Jim Doyle, a Democrat. In Tommy Thompson’s view, Doyle could not be counted on to aggressively defend the voucher system …. So, invoking a seldom-used power, the Governor “replaced” the Attorney General’s office for purposes of defending school choice with lawyers from private practice ….

Starr and his law partner Jay Lefkowitz, later joined by Paul Clement, led the legal defense. Clement, a Wisconsin native, would later become U.S. solicitor general himself, and he currently serves on Bradley’s board of directors.

As they prepared the defense, Starr reports in Religious Liberty in Crisis, they visited choice schools. “We were deeply impressed,” he writes, including St. Matthew’s and Messmer High School.

“The rigor of non-public schools was powerfully illustrated by our visit to Messmer,” according to Starr, “with its charismatic headmaster, Brother Bob Smith,” who has also sat on Bradley’s board. “Kindly and winsome, Brother Bob had built a culture of educational excellence in the context of faithful Catholic teaching. Inner-city schoolchildren were not only graduating at very high rates from Messmer High, they were college-bound.”

After the Milwaukee and Cleveland cases, Starr writes, “in the face of fierce, well-funded secularist forces, school choice in America was now safe, an enormous step forward for religious freedom.”

This article originally appeared in the Giving Review on September 14, 2022.