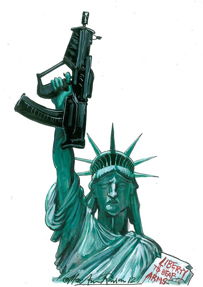 “New ATF Study: 423 MILLION Guns In Hands Of Americans”
Violent crime rate has decreased by 48.6 percent in tandem with ownership rise.
by Steve Watson
“Newly released figures from the U.S. Bureau of Alcohol, Tobacco, Firearms, and Explosives shows that there are now a whopping 422.9 million guns in the hands of Americans. The number equates to 1.2 guns for every person in the country. The figures also show that in 2018, 8.1 billion rounds of ammunition were produced by the gun industry.
The figures also reveal that the most popular firearm in the country is the much maligned sporting rifle, often mis-identified as an “assault rifle”, the AR-15 being one of the more popular models. The findings highlight that there are now 17.7 million of them in private hands, a record high, and more than half (54%) of all rifles produced in 2017 were modern sporting rifles.
The ATF figures also reveal that firearms-ammunition manufacturing accounted for nearly 12,000 jobs in the US, creating over $4.1 billion in goods shipped in 2017. “These figures show the industry that America has a strong desire to continue to purchase firearms for lawful purposes,” said Joe Bartozzi, president of the National Shooting Sports Foundation.
“The modern sporting rifle continues to be the most popular centerfire rifle sold in America today and is clearly a commonly owned firearm with more than 17 million in legal private ownership today.” Bartozzi continued. “The continued popularity of handguns demonstrates a strong interest by Americans to protect themselves and their homes and to participate in the recreational shooting sports,” Bartozzi added.
Bartozzi also noted that “as lawful firearms ownership in America continues to grow, criminal and unintentional misuse of firearms is falling.” “During the 25-year period covered in this report (1993–2017) the violent crime rate has decreased by 48.6 percent and unintentional firearm-related fatalities have declined by 68 percent.” he added.
One reason why the popularity of the sporting rifle continues to grow may be because it is routinely criticized and targeted in arguments for stricter gun control. Justin Anderson of Hyatt Guns, one of the biggest firearm retailers in the country noted that “Sales have definitely been brisk, especially of small, concealable handguns. We also saw a spike in sales of tactical rifles like AR-15s and AK-47s, for which I think we can confidently thank Beto O’Rourke.”
During a failed presidential run, Beto said on multiple occasions that he would ban AR-15s, and even go door to door to confiscate the weapons from Americans. With a near record high of gun sales on Black Friday, Americans are sending a clear message in exercising their Second Amendment rights.
- https://summit.news/

Source: http://coyoteprime-runningcauseicantfly.blogspot.com/2019/12/new-atf-study-423-million-guns-in-hands.html
BeforeItsNews Announcements
Step 1: Get the Telegram App & Get Stories Direct to Your Phone or Computer Without Censorship! Get the Telegram App in the App Store or at
https://telegram.org/