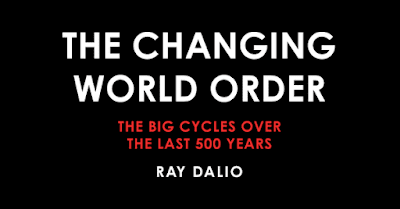 “‘Revolutions And Wars’:
What According To Ray Dalio Comes After ‘Printing Money’”
by Tyler Durden
“Having seemingly conquered the world of finance, Ray Dalio and Howard Marks have been competing who can be a more productive writer in recent weeks, and just two weeks after writing a lengthy thesis on the rise and fall of fiat currencies (which had no less than 43 mentions of gold for obvious reasons), Dalio is back to discussing one of his favorite topics, namely the rise and fall of empires, among which the US and China, over the last 500 years.
The third chapter of his “Changing World Order” series (preceded by Chapter 1 “The Big Picture in a Tiny Nutshell”, and Chapter 2, “The Big Cycle of Money, Credit, Debt, and Economic Activity” and its appendix “The Changing Value of Money”), takes a closer look at the rise and fall of the Dutch, British, and American empires and their reserve currencies and, in what will spark howls of outrage from both sides of the discussion, touches on the rise of the Chinese empire, which Dalio views as the next ascendent superpower “to bring us up to the present.”
Dalio’s latest 10,000-word essay (a 50 minute read according to LinkedIn) concludes that empires – just like humans – have a typical life cycle that ultimately come to an end. And while we will focus on the specific case of the US vs China in a subsequent post, we wanted to highlight the big picture, or what Dalio deems the key events in the “Big Cycle” behind empires’ rise and fall, for one specific reason: we find ourselves in the phase – namely “printing money and credit” – which according to Dalio is immediately preceding the far more troubling phase of “revolutions and wars.”
Here is Dalio summarizing his stylized empire “boom bust” cycle: “Just as there is a human life cycle that typically lasts about 80 years (give or take) and no two are exactly the same but most are similar, there is an analogous empire life cycle that has its own typical patterns.
For example, for most of us, during the first phase of life we are under our parents’ guidance and learn in school until we are about 18-24, at which point we enter the second phase.
In this phase we work, become parents, and take care of others who are trying to be successful.  We do this until we are about 55-65, at which time we enter the third phase when we become free of obligations and eventually die.  It is pretty easy to tell what phases people are in because of obvious markers, and it is sensible for them to know what stages they are in and to behave appropriately in dealing with themselves and with others based on that.
The same thing is true for countries. The major phases are shown on this chart.  It’s the ultra-simplified archetypical Big Cycle that I shared in the last chapter.

Click image for larger size.
In brief, after the creation of a new set of rules establishes the new world order, there is typically a peaceful and prosperous period.  As people get used to this they increasingly bet on the prosperity continuing, and they increasingly borrow money to do that, which eventually leads to a bubble.
As the prosperity increases the wealth gap grows.  Eventually the debt bubble bursts, which leads to the printing of money and credit and increased internal conflict, which leads to some sort of wealth redistribution revolution that can be peaceful or violent.
Typically at that time late in the cycle the leading empire that won the last economic and geopolitical war is less powerful relative to rival powers that prospered during the prosperous period, and with the bad economic conditions and the disagreements between powers there is typically some kind of war.
Out of these debt, economic, domestic, and world-order breakdowns that take the forms of revolutions and wars come new winners and losers. Then the winners get together to create the new domestic and world orders.”
And in case there is any confusion who Dalio expects the next war to be with, he makes it clear:
That is what has repeatedly happened through time.  The lines in the chart signify the relative powers of the 11 most powerful empires over the last 500 years.
In the chart below you can see where the US and China are currently in their cycles.  As you can see the United States is now the most powerful empire by not much, it is in relative decline, Chinese power is rapidly rising, and no other powers come close. 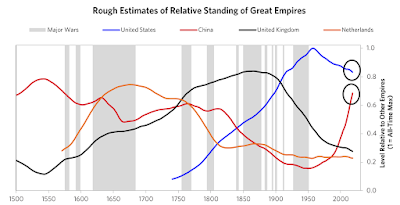 Click image for larger size.
Confused? In case that chart is a bit confusing, for simplicity Dalio offsers another chart showing the same lines as in that chart except for just the most powerful reserve currency empires (which are based on an average of eight different measures of power that we explained in Chapter 1 and will explore more carefully in this chapter). 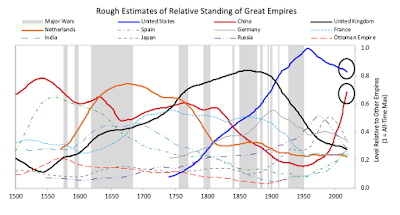 Click image for larger size.
Still confused? Here is the bottom line: While the US is doing this to pretend its economy and markets aren’t collapsing…

China is creating videos titled “peace behind me, war in front of me.” 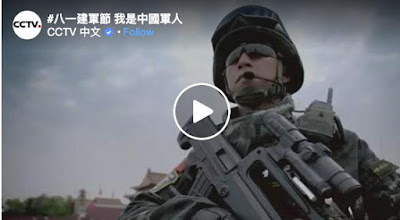 The narration (translated from Chinese):
“Who am I?
I am the one the mother cannot reach at the door.
I am the wife who is reluctant to hang up the phone.
I am a stranger who dares not approach in the eyes of my son.
I am the concern and pride of my loved ones.
Peace behind me, war in front of me.
Pick up the steel gun, we must let go of the children.
Put on the military uniform, we must give up comfort and ease.
Fighting the battlefield, the character of the man.
From the military to the country, there is no regret in this life.
I am a Chinese soldier.
I am a soldier of the people.
I am the guardian of a good life.”
Impossible to embed video, please view it here, and you should:
- https://www.businessinsider.com/
- https://www.facebook.com/CCTV.CH/videos/2309503975803815/
- https://www.zerohedge.com/

Source: http://coyoteprime-runningcauseicantfly.blogspot.com/2020/05/revolutions-and-wars-what-according-to.html
Before It’s News® is a community of individuals who report on what’s going on around them, from all around the world.