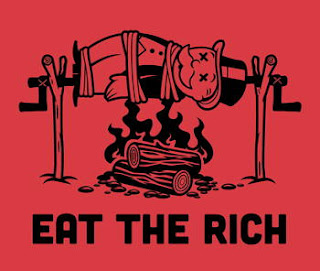 “Get Out Your Forks and Knives!”
By Bill Bonner
“When the poor shall have nothing more to eat, they will eat the rich.”
– Attributed to 18th-century philosopher Jean-Jacques Rousseau
“The crowd at a recent rally for Elizabeth Warren spontaneously broke into a chant: “Eat the rich… Eat the rich…” It’s all over social media. You can even get a recipe on Twitter. One, for example, tells you to “Simmer £100,000 cash in the blood drained from the carcass. Serve on a bed of rocket with a side of coleslaw.”
Height of Fashion: Here at the Diary, we eschew mobs, fads, and claptrap. So, by reflex as much as reflection, we will decline the “eat the rich” doctrine. Besides, we have never liked rocket salad. Too frizzy. Too airy. We prefer the fresh crunchiness of iceberg or romaine. But tastes change. We saw yesterday that Americans are “gunning up.” Our guess is that many of them will be gunning for the rich.
You can now buy dinner plates with “Eat the Rich” painted on them. Bands put out “Eat-the-Rich” albums. And, of course, “Eat-the-Rich” t-shirts are the height of fashion in some circles. The social contract – the generally accepted principles that bind rich and poor together – is giving way.
Plight of the Non-Rich: And why shouldn’t it? The system is corrupt. A few people get richer than ever, while most people – even with 21st-century technology at their fingertips – fall behind. In terms familiar to us at the Diary, leftist intellectual Chris Hedges describes the plight of many of the non-rich: “Some 41.7 million workers, a third of the workforce, earn less than $12 an hour, and most of them do not have access to employer-sponsored health insurance. A decade after the 2008 financial meltdown, the Times wrote, the average middle class family’s net worth is more than $40,000 below what it was in 2007. The net worth of black families is down 40 percent, and for Latino families, the figure has dropped 46 percent.
Some four million evictions are filed each year. One in four tenant households spends about half its pretax income on rent. Each night, some 200,000 people sleep in their cars, on streets, or under bridges. And these stark figures represent the good times Biden and the Democratic Party leaders promise to restore.
Now, with real unemployment probably close to 20 percent – the official figure of 10 percent excludes those furloughed or those who have stopped looking for work – some 40 million people are at risk of being evicted by the end of the year. An estimated 27 million people are expected to lose their health insurance. Banks are stockpiling reserves of cash to cope with the expected wave of bankruptcies and defaults on mortgages, student loans, car loans, personal loans, and credit card debt.”
Opposite of Capitalism: Mr. Hedges thinks he’s describing a failure of capitalism. But it wasn’t the capitalists who set interest rates near zero… who jacked up the stock market… who transferred trillions of dollars to their favored clients… or who printed the fake money. No… this was not capitalism. This was the opposite of capitalism. This was politics… where you get richer not by making others better off… but by making them worse off.
Real capitalism produces real wealth by requiring people to offer real goods and services to each other in order to earn their money. Politics merely “transfers” wealth from one group to another… either by taxation or money-printing. Some end up richer; most are poorer.
After the money system was changed in 1971, Democrats and Republicans conspired to rig the game in favor of the elite of both parties. Over the following half a century, they “transferred” trillions of dollars to the Wall Street/military/industrial/educational/medical/social welfare/prison complex – and to “the rich,” generally.
Problem Solved: The inequality, unfairness, corruption, and dishonesty of the system could be easily erased. In a matter of hours. All it would take would be a return to an honest money system, without any meddling by the feds. Stocks would crash to less than half of what they are today. Bonds, too, would implode. The Swamp would suddenly drain. The giveaways would come to an end. Hey, Presto! Problem solved.
On the Menu: Of course, there would be a depression, too; it would take time for the economy to adjust. And there would be some long faces as people realized they now had to earn their money honestly. No more unwinnable wars… no more open-ended boondoggles… no more $600-a-week bonuses for not working… no more bailouts for Wall Street… and no more $4 trillion deficits…
This is why the elites don’t really want to acknowledge or solve the real problem. Because the fake money lines the plush chair in which the elites – all of them, Republican and Democrat – rest their fat derrières. And this is why this scam won’t end if Biden and Harris take over from Trump and Pence. Even the leftists know that.
Hedges might not understand how the flimflam works, but he knows that “the system” is controlled by the “ruling elites,” who “wantonly pillage and loot.” Like the rest of the intelligentsia, he doesn’t want to think too deeply about how they do it. Instead, he just insists that something be done about it.
“Eat the rich,” for example. The elites will now get out their forks and knives, tuck their napkins under their chins… and, for the benefit of the hungry masses… put “the rich” on the menu.”
- www.rogueeconomics.com