When government policy continues to fail, wouldn’t it seem odd to keep making those same mistakes over and over again? Not for Republicans, or their blissful low information voters.

Tax Cut Obsession got old, and oddly, it’s never ever going to be low enough. Surprised?

Let’s deep-six this 1900′s way of thinking forever. You can only cut taxes just so much before our civilized society can’t support itself anymore, can’t progress, or pay forward money needed to help upcoming generations. Also interesting and true: 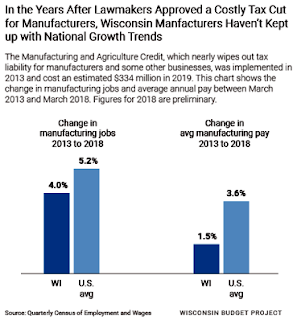 Tax savings to business owners of the manufacturing and agriculture tax credit has totaled $1.4 billion since 2011, and in 2019 alone totaled $334 million, meaning other taxpayers must make up that amount to help pay for services such as education, health care, public safety, and road repairs. Figures from September 2019 show state manufacturers employed 6,800 fewer workers in that month compared to one year earlier, continuing a trend of losses in that sector. 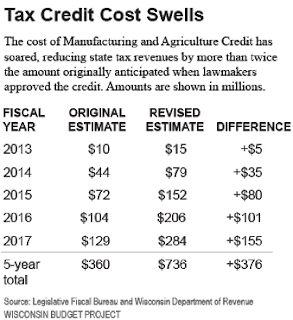 The relocation will help K-C work more with marketing, digital, and technology businesses in the Chicago area.
Kimberly-Clark also got a major tax break from the recent Piece of Shit tax bill that was jammed through by Republicans in Washington DC. In fact, Kimberly-Clark cited those tax cuts as a reason for the layoffs, because it allowed to begin a wide-scale restructuring in 2018, letting them reap the benefits of the “cost-cuts” by being taxed less.

This prompted Wisconsin US Senator Tammy Baldwin to ask why state and federal governments was giving so many breaks to a company that would cut so many Wisconsin jobs.

3. Foxconn: “Capitalism” and a $2.8 BILLION Taxpayer sweetened Scott Walker Debacle, endorsed by who else, grifter Trump:

Foxconn Technology Group is in breach of contract for failing to construct a high-tech screen plant in Mount Pleasant, while local governments spent hundreds of millions of dollars to prepare for the project, according to a lawsuit filed Tuesday by a real estate development company … the state agreed to provide up to $2.85 billion of tax incentives if Foxconn met certain hiring and capital investment thresholds. The state has yet to award the company tax credits for those purposes; however, millions of taxpayer dollars have gone toward infrastructure upgrades.

4. Summer Sales Tax Holiday shortchanges local Governments: It’s a nice idea, but; Vos-Republicans are generous with business tax cuts, but won’t replace lost local tax revenue with state backed money. Similar to this was the UW tuition freeze that should have been replaced with additional state funding to our state colleges.

Madison.com: The Department of Revenue said the push would decrease state sales tax collections by an anticipated $159 million and county sales tax revenue by $13.3 million. But it wouldn’t allocate money to counties or the state make up for the anticipated loss of dollars — a point some Democratic critics homed in on as they floated an amendment to backfill local governments (it was dismissed as not germane to the bill).

In other words, the results aren’t accidental when you consider who funds Republican candidates: