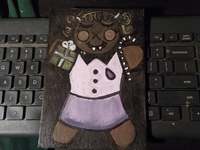 VIDEOS FROM THE INVESTIGATION:
www.youtube.com/watch?v=9HkyImEH7Dw&feature=youtu.be
www.youtube.com/watch?v=SugF8UPvcUg&feature=youtu.be
www.youtube.com/watch?v=0lEr0FWnbXE&feature=youtu.be
www.youtube.com/watch?v=Q5hyTFcTDvs&feature=youtu.be
INITIAL REPORT:
Date to be there: November 20, 2020, Friday. Time to be there: 7pm. Contact Person: Mr. G. Address to be at: San Jose, CA. Case# 9P16Y69J35650. Activity: Mr. G sees a leopard type of ghost. He witnessed entities taking his window apart and floating it towards him and making the window go back and forth. He sees entities floating around his house. He saw one entity sitting on the floor reading a book and talking to another entity and then talking to Mr. G.
11/21/2020. It’s a long trip to San Jose from Elk Grove. Our first stop was Starbucks. Deanna Jaxine Stinson ordered her drink and Starbucks messed up her drink twice, so we wind up getting 3 types of coffees and 2 of them were free, so now with all of the caffeine inside of us, we were ready to make this trip and we were definitely awake. When we arrived, we received a briefing from Mr. G. Mr. G’s wife wants the investigation to remain confidential and we will keep those wishes by calling our main client Mr. G. Alaceo “Big Al” Rosatano showed up after our arrival. Mr. G briefs us that he has been seeing entities that either may be demonic or even extraterrestrial. Some of the main things that he has experienced is that the entities cause his torso to move back and forth. While we were there, Mr. G’s started moving his waist and said the entities were causing this. Mr. G’s experience with the entities has truly upset him and while he was briefing us, he started crying. Mr. G’s wife just want things to go back to normal again. Mr. G states that when he was a child, he played with a Ouija Board and he may have brought on these entities. One of the scariest things that Mr. G witnessed is that the entities pulled out one of his bedroom windows and the window actually started floating towards him. Mr. G has seen a strange man in a robe reading a book and talking with another entity and then would start talking to Mr. G. This entity would shake his head after talking with Mr. G as in disapproval.
Orb with Face 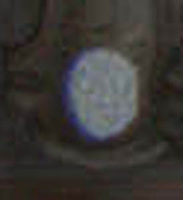 When we arrived Deanna picked up on a ghostly cat and described it. Mr. G’s wife says that was her cat that died. Deanna picked up on a man and woman leaning over Mr. G & his wife’s bed. Mr. G says that most of the strongest activity is in the garage and when we went to the garage, we captured a Class A EVP that said…”eeeeeeeeeeeeeeeeeee”. Another EVP we captured was a man saying “Hai”. Mr. G’s wife is Japanese and “hai” means “yes”, this could possibly be her deceased father. Big Al captured an orb on his picture and enhanced the orb and inside of the orb was a face. This orb picture was captured in the garage which has the most activity. Deanna felt something grab her arm. Deanna was also picking up on what she called fairy entities, she was seeing small fairy like beings floating around in the bedroom. Mr. G describes “The Tormentor” entity that pops out of no where and scares him. During our investigation, we did not encounter The Tormentor, nor did we encounter the “Phantom Leopard” that has been seen in the home.
The Haunted Home in San Jose

Mr. G and his wife felt that Mr. G may have an attachment and Mr. G was prepared to allow me to give him a full submersion baptism. A full submersion baptism is a basic form of exorcism and if Mr. G has an attachment, the attachment will immediately leave. After the baptism, I conducted a Roman Catholic house blessing with Mr. G’s wife and Deanna conducted a metaphysical home cleansing. After the cleansing, things felt lighter and we can only hope that whatever is haunting Mr. G and his wife is gone for good.