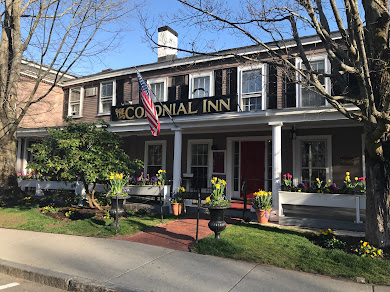 If you’re looking for an elegant place to stay in the Concord, Massachusetts area, filled with history and GHOSTS, look no further than the Colonial Inn! Originally built in 1716, Concord’s Colonial Inn has been a private residence, a boarding house, and even acted as a variety store before becoming Concord’s Colonial Inn in 1900. Over the years it has gone through multiple expansions and renovations and has picked up quite the haunted reputation throughout New England.

One of the first recorded experiences of ghosts at the hotel comes from 1966. Newlyweds M.P. and Judith Fellenz were visiting from New York and were given Room 24 on the second floor. The next morning, Loring Grimes, the innkeeper, noticed that the bride looked pale, but didn’t think much of it.  However, two weeks later, a letter arrived from Mrs. Fellenz. In the letter, she states that during her stay on June 14, 1966 she had encountered what she believed was a ghost and wanted to know if anyone else had reported similar experiences.

She claims to have awakened sometime during the night, feeling like there was an unknown presence in the room. She saw what she described as a grayish, shadowy mass standing to the left of the bed, about 4 feet away. The vaguely human-shaped mass floated to the foot of the bed where it stayed a moment before melting away.

Since that fateful encounter, the Colonial Inn has embraced its haunted history, and proudly shares information about the hotel’s ghosts on its website. Room 24 is still considered the most haunted room in the hotel…and for good reason. It seems that during the Revolutionary War, the inn was actually a private residence owned by a local doctor. Room 24 became an operating room for wounded soldiers, and many passed away, in great pain, within its walls. Interestingly, it is noted that the ghosts that roam the Colonial Inn rarely include Revolutionary War era soldiers.  Rather, it is the CARETAKERS of these soldiers and the inn that are more likely to be seen, including a nurse named Rosemary.

Rosemary is seen as an older woman who roams throughout the halls. Disembodied voices have been heard, floating orbs have been seen on camera and with the naked eye, and it’s not uncommon to experience flickering lights or lights/televisions that come on by themselves in the middle of the night. Room 27 on the first floor was used as a morgue during the Revolutionary War and is also a favorite haunted hot spot for those wanting to experience something paranormal during their stay.

The Colonial Inn’s haunted reputation has attracted both curiosity seekers looking for a spooky night’s stay, and also seasoned paranormal investigators. Over the years, several teams have come to the hotel looking to collect evidence of the afterlife, including the team from TAPS.  Ghost Hunters filmed an hour long episode (Season 6 Episode 14) at the hotel in 2010.

*Information and Photos for this blog came directly from Concord’s Colonial Inn’s website.*