I received a nice email from Karen Jean Caruso – Walker. Karen being a world traveler has been on a nice cruise to the Caribbean, visiting many islands and has been to the Middle East and South Korea. Her fondest memory is visiting the Belogradchik Fortress in Bulgaria two years ago. Karen wondered off on her own and did her own exploring and came across 3 dark skinned men on horses. One of the horses was pure white, while the other two horses were brown. Karen says that the men were dressed in a colorful type of uniform that consisted of the colors red, white and gold. On one of the men, it appeared he had a gold plate on his chest. Karen says all 3 men wore red turbans on their head. Karen said that she could see that one of the men was brandishing a long sword with a very detailed handle. Karen watched the 3 men on horses as they prodded along. One of the men seemed to look at Karen and then faced the direction he was going. As Karen watched the 3 men on horses, they just faded away. Karen realized what she saw were ghosts. Karen rejoined her tour group and learned that at some point of time in history, the Ottoman Empire conquered Bulgaria and she may have seen Ottoman soldiers on horseback. Karen says that she did not mention to her group on what she saw, because it seemed to incredible of a story, but felt she had to now relate the story to someone. I thanked Karen on her correspondence and this is what I found on the Belogradchik Fortress.
SOME HISTORY:
This fortress was built during the time Bulgaria was part of the Roman Empire. The builders determined that the natural rock formations would serve as added protection. The rocks were 230 feet high and the builders only needed to place fortified walls on the northwest and south east sides. The fortress was used mainly for surveillance. It was also used as defense if necessary. In the 14th century Bulgarian Tsar Vidin Ivan Stratsimir extended the fortress. He set up a goal to build fortified garrisons in front of the existing rock formations. During Stratsimir’s rule, the fortress became one of the best strongholds in the region. It was the 2nd best stronghold, the first being the capital fortress of Vidin, Baba Vida. This fortress was captured by the Ottomans in 1396. The fortress was last used in warfare during the Serbo-Bulgarian War of 1885. 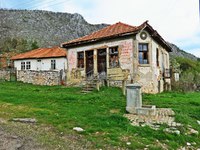 OTHER PLACES IN BULGARIA THAT ARE HAUNTED
PARAMUN VILLAGE
This village is 70 kilometres west of the Bulgarian capital of Sofia. The village is practically abandoned. You see old houses with cracked walls, peeling pain and shattered windows. Population is less that 50 people. Villagers claim that they see their dead relatives and friends roaming around the village during twilight hours.
EASTERN ORTHODOX RILA MONASTERY
This monastery was founded in the 10th century. Ghostly monks have been seen roaming the grounds.
OLD NESSEBAR
Open shops, cobblestone roads. The old town walls and monuments from the Roman and Byzantine era can be seen. Old Nessebar has been around for 9000 years. An old hunchback lady carrying a basket of flowers is seen walking along the cobblestone road. When one of her flowers falls to the ground, she goes to pick it up and then she vanishes. She has the nickname Old Nessebar Hag.
TSAREVETS FORTRESS
This was the home of medieval tsars. Some tourists say that they can sometimes hear a wailing noise that sounds human. Other tourists have claimed they heard a woman screaming.
THRACIAN TOMB OF SVESHTARI
This tomb has been around since the 3rd Century BC. It is rumored that it was built for a royal couple from Thracian Tribe of the Getae. A few tourists have said that they were touched or that their hair was stroked by an unseen entity or entities. 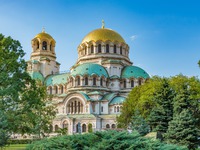 ALEXANDER NEVSKY CATHEDRAL
Built around 1882 to 1912. This cathedral was built to honor the 200,000 Russian soldiers that died defending Bulgaria during the Russo-Turkish War. The Russian soldiers were fighting for Bulgaria’s freedom. A tourist named Nikolay Georgier claims while visiting this Cathedral, he came upon a huge blinding light in the shape of an angel. The angel he saw was 15 feet tall and had what appeared to be wings. The angel appeared to him for about 3 minutes and flew quickly into the sky. The angel went from a human shape into a beam of light. Nikolav will never forget the Angel of Alexander Nevsky Cathedral.
ON AN UNRELATED NOTE (A DREAM I HAD):
I have to mention this. On May 20th after midnight, maybe around 2am or 3am, I had a vivid dream that I went to a Cher benefit concert and Cher invited me back stage to interview her. Cher told me that she is having skin issues, like the skin issues that Morgan Freeman has on his face, around his eyes. Those skin issues are call (DPN) dermatosis papulosa nigra. Cher then shows me the skin issues that are all over her body and tells me that she is going to see a plastic surgeon to remove them. After I see her skin issues, I wake up and tell my wife about my dream. Later in the day, we turn on the news and it is mentioned that Cher’s birthday is May 20th. It is very odd that I would dream about Cher on her birthday and I had no inkling of an idea it was Cher’s birthday. Side Note: I met Cher in 1979 at Harrah’s Tahoe. Shook her hand and introduced myself. I was with Jeff Kutache’s Dancing Machine at the time when I met Cher.