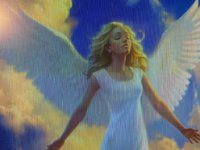 I believe that everyone on Earth is watched by a higher advanced being. Most people will call these beings angels. I know for a fact that angels exist, because I was actually saved by angels twice in my life. But, before I go into those stories, I received an angel story from Sally Howard, please read below:

Sally Howard’s Angel Story
It was just a short encounter… I was a scared child..so I was visiting my sister who lived with my dad’s brother and wife. Sometime during the night, I fell out of the bed and found myself on the floor in-between the bed and wall. Because I was so afraid of the dark this was devastating for me, because I would hide under all the covers to feel safe. So, I was so afraid to look up, but when I did, I saw this girl in white gown staring down at me. I believe she is why I woke up! I quickly jumped back in the bed. I believe this girl in a white gown could have been possibly an angel that was looking after me.

My mother Rosemarie Roberts, when she was a little girl was visited by a child saint. Below is my mother’s story.

Rosemarie Roberts aka Rosita Causing Child Saint Story:
My mother says that when she was a little girl, on one particular night, she saw a tiny blue orb hovering over her bed. As she watched this glowing blue orb, it became larger. The orb started to take shape and finally she was looking at a small child holding a basket of roses. My mother says that this child was engulfed in a glowing aura. The child holding a basket of roses started approaching my mother. As the child approached, a rose petal would drop to the floor. There was a trail of rose petals that went from the foot of the bed to the side of the bed. My mother became scared and started screaming. My mother’s father ran into the room to see what was happening and to his surprise, my mother was in her brother’s bed and my mother’s brother named Jose was in her bed. Somehow, my mother and her brother switched beds and they had no idea on how this happened. My mother at the time, thought she saw a ghost. When my mother got older, she went to her priest and told him the story of her paranormal encounter. The priest showed my mother various pictures and drawings of child saints and when she came upon the drawing of Saint Quiricus, she told the priest…”this is the child ghost that came to visit me!!” My mother came to the realization that she was visited by a child saint. 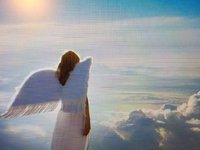 Now to my angel stories. To this day, I believe I was saved by angels twice in my life. Here is the first story.

My First Angel Encounter
Location: Lake Tahoe, California. Year 1979. I was living in Lake Tahoe in the latter part of 1979. I was a professional disco dancer and performed at Sahara Tahoe and Harrah’s Tahoe with Jeff Kutash’s Dancing Machine. I was living in a cabin with Jeff Kutash’s Dancing Machine troupe with my first ex-wife Karen Jean Caruso/Walker Roberts. On one night, I was selected to head out to the store to get groceries for the whole dance troupe. As I headed out on this night, the snow became thicker, and the road became slippery. A rabbit ran out in front of my car and I made a sharp swerve to avoid hitting the rabbit. Before I knew it, my car with me inside was rolling down a sheer cliff. My car did 7 rollovers. Most people do not survive rollovers, but for some reason, I felt like I was being cushioned inside my car. I felt something soft and invisible that was shielding me while the car rolled over. When my car finally settled down, I merely stepped out of my car unscathed. The police arrived and after seeing how my car was now totaled, he was absolutely amazed that I survived. The police officer tells me that most people do not survive a rollover. He also told me that I should have run over the rabbit and that someone is looking out for me, since I was still alive. Yes, I do believe an angel saved my life that day.

My Second Angel Encounter
Location: Sacramento River. Year 1994. I went to the Sacramento River with my 2nd ex-wife Patricia Mary Mitchell, my son Jason and 2 of my nieces. Everyone was having a great time on the Sacramento River beach, playing volleyball, while I was on a rubber raft laying out in the sun in the river. A speed boat goes by at a high rate of speed and tips over my rubber raft. I get trapped in an underwater current and before I knew it, I was going under. I tried yelling at my family, but they were laughing and having fun playing volleyball. I was going under for the last time and before I knew it, I was on the bottom of the riverbed!! I was going to drown, I was panicking and going crazy underneath the water. I knew if I didn’t get out of this predicament soon, I would die. I prayed, I didn’t want to die. Before I knew it, I felt two large hands holding onto my chest and pulling me up to the surface. The invisible hands held my chest tight and practically threw me on the dry beach. I knew those hands on my chest were the hands of an angel. I was so happy to be on the beach and yelled at my family…and told them…”I almost drowned!!” They thought I was joking and laughed. When later I told them the story, they believed me. With these two experiences, I truly believe in angels and I feel everyone has an angel that looks over them. I believe these angels also record on how we live our lives.

As a paranormal investigator, I have been on over 2,500 investigations. Three of those investigations were cases in which the occupants felt they were haunted by “angels” and all they wanted was validation that angels were in their homes. We never obtained validation and I believe it’s because angels do not have to prove anything, they know that they exist and it’s up to us to believe in them.