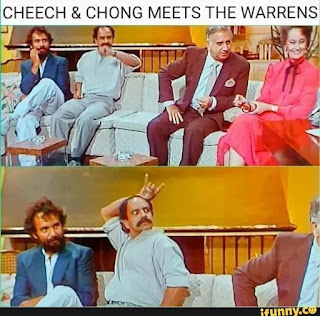 It isn’t Friday yet, but I could desperately use a little laugh!  The photo above was all over Facebook the last few months, but was also all over Reddit, and by the caption, appears to have originally come from ifunny.co. It shows the legendary pot-smoking comedy duo, Cheech and Chong, meeting the world-famous ghost hunting couple, Ed and Lorraine Warren.
You know me—I had to do a little digging to see what I could learn about the context of this rather odd celebrity meet-up.
On September 24, 1982, both Cheech and Chong and Ed and Lorraine Warren appeared together on The Merv Show, with host, Merv Griffin. This was the 15th episode of the 21st season of the popular talk show, and the four appeared that day along with musical guest Richard Walley and actress Carol Channing. Another guest on this particular episode was Judith Glatzel, the mother of David Glatzel, who would become a central character years later in the movie The Conjuring 3: The Devil Made Me Do It.
The previous November, Judith believed that the 11 year old David had been possessed by a demon and had sought the help of the Warrens. While trying to petition the Catholic Church for a formal rite of exorcism to be performed on David, the demon allegedly hopped into David’s sister’s boyfriend, Arne Johnson. Johnson, under the influence of this demonic possession, killed his landlord, and was convicted of first degree manslaughter.
David and his brother would later go on to sue the Warrens for publishing his story without his permission, and as family testimony of exactly what happened told very different stories, David seemingly dropped out of public view as an adult. So yeah, that’s some pretty heavy stuff for this type of television program! I looked at various newspaper clippings showing TV guides, and it seems as if this show came on around 4pm EST…so particularly heavy stuff for late afternoon!
Luckily Cheech was there to add in some much needed comedy to a rather dark segment of television history. I’m just hoping that the actual video surfaces soon! Happy Haunting ya’ll.