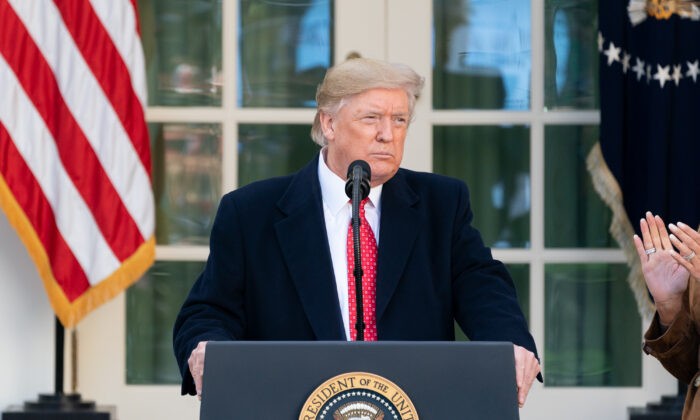 The White House said late Dec. 1 that President Donald Trump will not be attending the first impeachment hearing scheduled by the House Judiciary Committee for Dec. 4.

In a letter to House Judiciary Chairman Rep. Jerry Nadler (D–N.Y.), White House Counsel Pat Cipollone said that the terms of the impeachment process continue to be unacceptable and unfair to the president, citing conflicts with precedence.

“We cannot fairly be expected to participate in a hearing while the witnesses are yet to be named and while it remains unclear whether the Judiciary Committee will afford the President a fair process through additional hearings,” Cipollone wrote. “Under the current circumstances, we do not intend to participate in your Wednesday hearing.”

White House Response to HJC… by The Conservative Treehouse on Scribd

He accused Democrats of “purposely” scheduling the hearing to coincide with Trump’s widely known appointment to attend the NATO leaders meeting in London from Dec. 3 to 4.

According to media reports, lawmakers on Dec. 4 will hear from a panel of academics on the history and constitutional basis of impeachment. Cipollone criticized the hearing for providing no transparency and no plan for fact witnesses of Trump’s allegedly impeachable actions to be given the opportunity to testify.

Top Republican on the House Judiciary Committee Rep. Doug Collins (R-Ga.) has requested that Nadler provide Democrats and Republicans an equal number of academic witnesses to align with the procedures used during the impeachment inquiry of former President Bill Clinton.

He told Fox News on Dec. 1 that the upcoming hearing “is a failure of the Judiciary Committee to be able to talk to fact witnesses, to be able to talk to the people that have actually been a part of this, and actually have the president viably participate in his own defense—which he’s not had the opportunity to do now.”

Jenna Ellis, senior legal advisor to the Trump 2020 campaign, said earlier in the day that given the circumstances, Nadler’s terms provide only another “arbitrary hearing.”

“In a regular judicial proceeding where there is due process, the prosecutor and the judge are not the same person. That is what Jerry Nadler and Adam Schiff are doing. They are the prosecutor, the judge, and the jury. That is not a separation of powers,” she told Fox News.

“If the really wanted to seek truth and fairness, they would allow an impartial arbiter to come in and they would not be acting as prosecutor and judge at the same time.

The Dec. 4 hearing will be the first in a series to consider articles of impeachment since the closed-door depositions by the Intelligence, Oversight, and Foreign Affairs committees, followed by two weeks of public hearings in front of the Intelligence Committee that have focused on Trump’s approach to foreign policy in Ukraine.

The House Intelligence Committee is widely expected to vote in favor of formally approving its draft report outlining what the committee sees as articles of impeachment against the president. The draft will then be reviewed by the Judiciary Committee in their impeachment hearings.

The draft, which will be released to the 13 Democrats and 9 Republicans on the Intelligence Committee on Dec. 2, is expected to go to vote on Dec. 3.

Loading...
"Not by might, nor by power, but by my spirit, saith the Lord of hosts." Zechariah 4:6
Read it..
BEFORE IT'S NEWS
SIGN UP FOR OUR NEWSLETTER
Today's Top Stories
Corona Unmasked: Chinese Intelligence Officer Reveals True Magnitude of China’s Fake “Coronavirus” Crisis
Why Did the NWO Perps Really Bio-Engineer the Wuhan Coronavirus Pandemic?
Underground Secret Bases: Something Very Strange Is Going on All Around the World
Iranian City of 1.2 Million on Lockdown Due to Coronavirus? What Is Really Going On?
X22Report: We Are Close, Fear, Panic, the Feeling of Doom Overtakes the Deep State, Justice Is Coming! - Great Video
Be Alert Not Alarmed North America!! Coronavirus Patients Moved to Spokane, Plausible Deniability Ready to Go, Trojan Horse... P.S. It's Not A "Normal" Virus Hint Hint!!
Live Streaming: Top Scientist Confirms COVID-10 Is A Bio-Weapon! 2-19-20
Each Body Part Is In The Palm Of Your Hand-Press These Points For Wherever You Have Pain (Video)
Confirmed: CoVid-19 Coronavirus Found to Contain Unique “Gain-of-Function” Property “for Efficient Spreading in the Human Population”... Exact Quote From Science Paper Just Published in Antiviral Research
Traitor 44 Was Doing Personal Favors for Soros & it's All Going to Be Publicized! - Must See Video
Loading...
Featured
Doctor's Viral Coronavirus WARNING Video Mysteriously Removed!
Nobody Is Talking About This or “Everybody Is Talking About This”: Global Outbreak! - Great Jason A Video!
Chinese Companies Struggle to Pay Their Workers Due to Coronavirus
Amazing 9/11 Video Debunks Aircraft "Missing Wing" CGI Theory
They’re Still Spraying Chemtrails All Over Wuhan! Must See Video!
The 2019 Economist Predicted the Coronavirus: A Tale of Two Infectious Disease Doctors and the Diamond Princess
Shout Out 2 Roseanne! MOAR--Q! Congrats 2 Creators Who Were Q'd! FISA Brings Down House! - Great Video
Another Disastrous Night for the Hapless Democrats! Great Dan Bongino Video!
Google Cloud Manager's Wife Found Dead - He Was Arrested for Her Murder Hours After Claiming She Was Missing During Hawaii Vacation
Pounding Lil' Mikey - Las Vegas Democratic Debate Circus Highlights