BATTLE FOR WORLD | July 30, 2020: And Haaretz is reporting that: The far-right Israeli extremists hunt for ‘Antifa A-holes’ at anti-Netanyahu protests.

TruNews: What is going on in Israel now is Jew on Jew violence, and so Israel is entering into a state of civil unrest like what is going on inside the United States. Yet the government of Israel is trying to convince other countries that “Israel” is the shining example of democracy in the Middle-East. This is said every time the United States gives money and military aid to the country. According to some, Israel is turning into a failed state, it is collapsing. It was built on blood and violence. … You have to get your head wrapped around this one, about Antifa is in Israel now. …They have always been in Israel, because Antifa is a creation created by “anti-fa-scist”, hence the name. And first started as a Jewish organization. At the time you had the fascists from out of socialism, fighting the communists for the control of a worldwide movement. Don’t let the media and academics misinform you about history. The fascists were socialists who were clashing with the communists. …What are the odds today that Antifa has the same roots? It’s very high. Antifa is in Israel today, how could this be, did they leave Portland in the United States and go to Tel Aviv to joint the fight? Is it also possible that they left Tel Aviv and went to Portland? The United States imports many of Israeli tactics, like the police putting the knee on the neck when arresting someone. Paid for by the ADL, said the host Rick Wiles. … 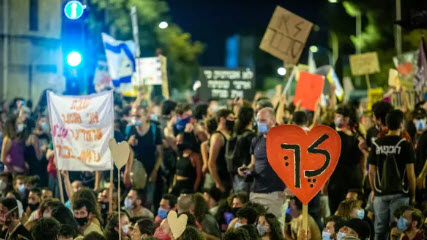