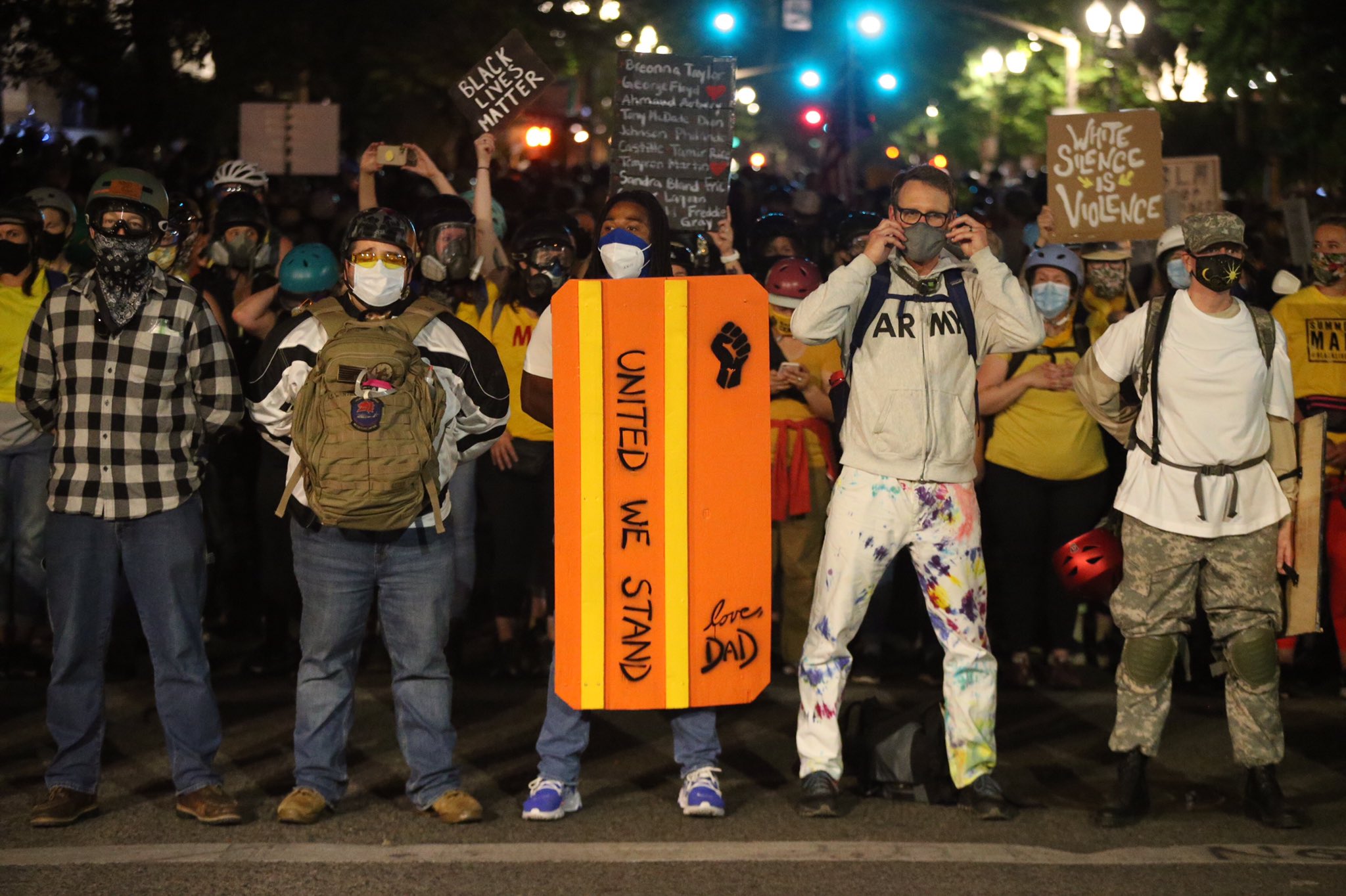 This past month, the news seemed filled with veterans involved with right-wing armed extremists — whether Marine Corps veteran Daniel Harris, one of the Boogaloo Bois arrested this month in Michigan for plotting to kidnap the governor or their role in the Nazi-leaning Oath Keepers. This coverage portrays veterans as all on one side of the uprising that began on Memorial Day with the death of George Floyd.

But veterans have also played an active role in the uprising led by the Movement for Black Lives. And thousands of veterans have formed a Frontline Election Defenders team to use skills honed in the military to protect polling stations and post offices. “Right now, our veteran members are mobilizing as part of the largest united front effort in U.S. history to protect the election and fight for our future regardless of the outcome,” read one email from About Face, formerly known as Iraq Veterans Against the War.

This summer’s uprising sparked the creation of new groups by veterans — some of whom had never thought of themselves as activists — such as Wall of Vets and Continue to Serve. The movement they were joining is nonpartisan. It includes veterans groups on the left, like About Face and the Working Families Party-affiliated Vets For the People, as well as the Republican-leaning “Veterans Coalition” convened by the Lincoln Project. Somewhere in the middle — in partisan affiliation and tactical approach — are VoteVets, Common Defense and Vets for Responsible Leadership. Quietly active in some of the latter groups are members of Veterans for Peace, which has been supportive of Black Lives Matter from the beginning. Their combined membership is in the tens of thousands.

Veterans have been involved in the movement since before June 1, when protesters were tear-gassed in multiple cities, including in front of the White House, where National Guard troops were deployed. National Guard Maj. Adam DeMarco was one of the soldiers who was sent to respond. On Sept. 16, DeMarco spoke to Congress about that day under the protection of the Military Whistleblower Act. He described a largely peaceful protest aggressively disrupted by the Secret Service, the D.C. Park Police and other unidentified law enforcement agencies. Since that day, we’ve learned about the vicious braid of federal law agencies tapped by Trump to “restore order” by stomping out protest.

Watching the events that day was young Marine David Smith, a corpsman who’d deployed to Afghanistan before coming home and joining the reserves. He never expected such a warlike deployment in his front yard. “I watched those people get gassed, and I burst into tears,” Smith said. “Then a buddy of mine called and said, ‘We have to get out there,’” referring to the stretch of Pennsylvania Avenue now known as BLM Plaza.

Smith organized another march for June 6, using the hashtags #Vets4BLM and #ContinuetoServe. “Veterans from upstate New York drove to D.C. to be a part of this protest,” Smith said. “Veterans from across the country have been messaging me this week, asking about the organization, who to contact, how to find people in their communities, what I am doing to organize a group here, how to donate, and on and on.”

Thus was born ContinuetoServe.vet, which now has dozens of members and works closely with D.C.-based Black organizations. Continue To Serve is also the D.C.-area branch of the national group now known as Wall of Vets, born from the literal line formed by veterans at protests in Portland in August.

The Wall of Vets was first imagined by Christopher David, the 53-year-old Navy veteran. David was beaten by federal forces in Portland on Aug. 26, just three days after Jacob Blake was shot and nearly killed by police in Kenosha, Wisconsin in front of his children. Portland was just one epicenter of protest that week, but the city made headlines for the deployment and behavior of agents from the Department of Homeland Security. David had asked them, “I still honor the oath I took. Why don’t you?” In response, two officers assaulted him, breaking all the bones in his right hand.

When David was interviewed by TV reporters that week, he told them that more veterans needed to step up for peaceful protesters. Noting that organizers had formed a “Wall of Moms” between protesters and police, he said that there should be a similar wall of veterans supporting Black Lives Matter.

Portland veterans answered that call with some vigor. African-American Navy veterans Leshan and Tessa Terry, had been protesting daily with the local Black Lives Matter. They put up a notice on Facebook and organized a Wall of Vets, along with fellow Navy veteran Dan Nisevich and ally Kim Holloway. A line of veterans formed and stood between the federal forces and protesters. Holloway said that they knew that “the feds are more likely to talk to us than beat on us.” Some of the veterans involved believe their presence contributed to the withdrawal of the federal agents.

That line also attracted national press: Former Army infantryman Clint Hall told the New York Times that the federal response was “over the top,” and that what they sprayed “felt worse than the tear gas he recalled from his time in the Army.”

Vets all around the country followed suit, forming their own walls of veterans at protests. Speaking at a “Save the U.S. Postal Service” rally in upstate New York on Aug. 19, Army veteran Colleen Boland wore a “Wall of Vets” T-shirt and told the crowd: “I am here today to say [that] the nation’s veterans are here to fight for safe and secure voting for our black and brown brothers and sisters.” Wall of Vets now boasts 22 chapters across the country, and Dan Nisevich serves as its executive director.

The Wall of Veterans reached out to Smith’s D.C.-based Continue to Serve, and together they mobilized a contingent of veterans for the Aug. 28 March on Washington. The event, long planned to commemorate the 50th anniversary of the iconic 1963 march, featured the families of those shot or killed by police officers, including relatives of George Floyd, Jacob Blake and Breonna Taylor. Her killing by police in March sparked activism before the death of George Floyd.

Waging Nonviolence depends on your support. Become a sustaining member today and receive a gift of your choice, including this tote!

Soon after that march, a 29-year-old Black cyclist named Dijon Kizzee was shot and killed by L.A. County sheriffs. Wall of Vets Los Angeles responded immediately, first exposing the fact that many L.A. sheriffs and police officers are members of cliques — often called gangs — with names like “Vikings” and “Executioners.” Using the #JusticeForDijon hashtag on Twitter and Instagram, Wall of Vets called on veterans to support protesters who were already filling the streets. As vets were doing so in mid-September, the LA Wall’s main organizer put her own body between LAPD and protesters, suffering a leg wound from a rubber bullet.

Over the months that followed, multiple peaceful demonstrations were met with similar “nonlethal munitions,” tear gas and the so-called “kettling” of protesters, which involves surrounding them with large cordons of officers to control their movement. As police riots swamped cities from Portland to Rochester, New York, veteran volunteers continued to show up — documenting police misbehavior on video and sometimes serving as liaison between protesters and police.

Even as they joined other progressive campaigns, like actions against voter suppression, veterans always dialed back to Black Lives Matter — especially when the Kentucky grand jury failed to indict a single police officer for killing Breonna Taylor.

Most were careful to stay out of the limelight. In response to the “police-involved killing” of Deon Kay, David Smith said that Continue To Serve took the lead from other organizations in the D.C. area, such as DC Protests and The Palm Collective. “Our role in all of the BLM events is to support these organizations however they need — from medical, security, logistics, supplies and manpower,” he added.

Long before other veterans mobilized, the 35-year-old organization Veterans For Peace, or VFP, has been wrestling with how they can best support Black lives. After the 2014 killing of Michael Brown in Ferguson, Missouri, VFP changed its mission to “Peace Abroad, Peace at Home.” Michael McPhearson, who was VFP’s executive director at the time, still remembers some veterans asking “What does police brutality have to do with our mission?” Six years later, those who still did not understand the new focus have left the group, and the rest speak eloquently about the connection between racism and militarized police.

In Tulsa, Oklahoma during Trump’s June 20 visit, About Face and VFP were there to provide on the ground training for the local “Unify Tulsa” coalition — along with Grassroots Global Justice, Climate Justice Alliance, It Takes Roots, BlackOut Collective and the Ruckus Society.

McPhearson’s successor as VFP director, Garett Reppenhagen, was among those arrested for climbing the flagpoles at the BOK Center to raise a Black Lives Matter flag. While the majority of veterans were escorted out, four people were arrested attempting to raise flags that said “End the war on Black people” “Defund the police” and “Invest in Black communities.”

In August, Reppenhagen said that VFP still had a steep “learning curve” about the role of police and settler-colonialism in both policing and the military itself. Since the uprising began, the organization has commenced weekly “Stand Down” webinars to keep educating themselves and reach out to veterans and active-duty servicemembers about intersecting oppressions and opportunities for action.

Meanwhile, individual members are connecting with local Black Lives Matter groups to see what’s needed on the ground. David Smith of Continue to Serve said that he and VFP share a common commitment. “The deaths continue to occur,” Smith said. “And we will not stop in our support of the BLM movement until all citizens are treated equally.”