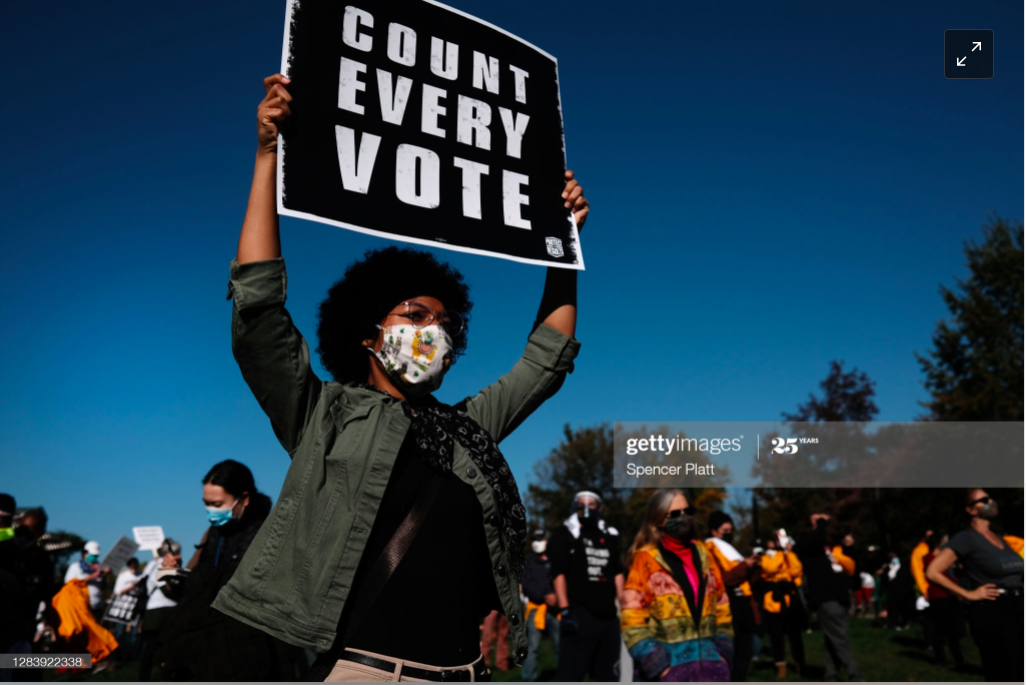 Almost as clear as the deep divisions within the United States is the exhaustion we feel about the current political process unfolding during a growing wave of the COVID-19 pandemic. The surprises and swings of this post-election period must be met with a careful, nuanced look at the realities we are facing — so we can best prepare and organize today for a more just and peaceful tomorrow.

With that in mind, here are six talking points — looked at through a lens of historic movement-building — that provide some possibilities for hope and a sense of the hard work that lies ahead.

1. Trump is a trickster with amazing staying power. While he has defied all expectations, he alone is not able to alter reality based on his house of lies.

In the weeks leading up to the Jan. 20 inauguration, there is likely to be one after another outrageous and infuriating action — not only on the part of Trump but also possibly on the part of some anti-Trump individuals who do not share a holistic vision of a world free of oppression and violence. It would be both disastrous and untenably exhausting to try to prepare for, counter-act and/or resist each and every one of these outrages.

We must first be alert for repression against the most targeted communities and leaders among us.

We must choose our actions wisely, remembering that there are many, many people across the United States preparing for many different scenarios: machinations on the state legislative level; interventions at the electoral college; state, federal and Supreme Court legal subterfuge; hiring and firings to enable disruption of government departments and agencies; fundraising to deal with massive personal and campaign debt; media manipulation and the expansion of direct lies to undermine the transition and government in general; and attempting to mobilize parts of the military and law enforcement. We must first be alert for repression against the most targeted communities and leaders among us. We must plan for the inauguration and the post-inauguration period. But we must not think that each of us or our organizations must respond to every disruptive move.

Successfully reversing a popular victory of over five million votes and a comfortable electoral victory — which virtually every credible authority has stated was essentially free from fraud — will take a massive effort well beyond the reach of Trump’s inner circle or a divided Republican Party. We must remain vigilant, while also recognizing these realities.

2. We ride on the cusp of amazing mass organizing, but one that can only wield real influence if we consolidate into a full-fledged movement with successful short-term campaigns and long-term goals.

Joe Biden didn’t receive the largest vote in U.S. history because he is such an overwhelmingly inspiring, unifying or visionary figure. The close to 78 million ballots cast in the midst of the coronavirus show the depth of anti-Trump sentiment more than any pro-Biden feelings, but they also evidence the successes of extraordinary registration, get-out-the-vote and grassroots empowerment efforts.

Contrary to myths that are already being spread within progressive circles, these efforts were led mainly by Black and Latinx communities, militant trade unions, young people concerned about their future and that of the planet, and others long disenfranchised but deciding once again to come out in record numbers to prevent further devastation. We would do well to keep sight of this instead of quickly cashing in on the idea that only “lowest-common-denominator” compromising principles will yield the power we need to make basic change.

3. As we work to build a “Beloved Community” movement — multi-issue, Black, Indigenous and people-of-color-led, with clear class and gender analysis — we must stay focused on what we are organizing for (not just a single presidential campaign). We also need to remember that the Trump constituency is also large and continuing to organize.

Just as it would be foolish to see the election outcome as “a people’s victory against fascism,” it would be a terrible mistake to see even the formal transition of power in January as the end of an era. Trump’s power has always been his ability to mobilize a base with an overt acceptance of white supremacy, patriarchy, militarism and/or nationalism — and those mobilized will not go away.

Organizing for real democracy — beyond a single election, individual candidate or electoral politics itself — must be one task of a creative progressive movement.

Unless we look very closely and stay focused, we aren’t likely to see how a more covert, armed, locally-based, right-wing series of groupings will intensify over the next two to six years. At the same time, we shouldn’t be surprised if a figure far less brash and chaotic than Trump (but equally or more charismatic) emerges in the coming years to take power through elections or others means. Recognizing and preparing for this — organizing for real democracy beyond a single election, individual candidate or electoral politics itself — must be one task of a creative progressive movement.

4. We must remember that as good as Biden may seem to some in comparison to Trump, he is in many ways a “Blue MAGA.” His brand of “Make America Great” neoliberalism may look different than his conservative friends in the Senate, but it shares the same roots.

Giving Biden a “pass” at this time or pinning our hopes on him or Kamala Harris would be like giving an endorsement to our jailers. There is a reason why, in response to last summer’s Black Lives Matter uprisings, Biden loudly asked: “Do I look like a radical socialist with a soft spot for rioters!?” Clearly the two of them will attempt to split those they deem to be “nonviolent” and acceptable and those they condemn as “the bad protesters.” Many who consider themselves liberal might look the other way as a new generation of those working for social change are criminalized, disempowered or worse.

Let us also not forget that it was former President Barack Obama — in his behind-the-scenes moves to push Biden’s White House bid — who undercut the budding NBA and wider sports strike. It will be a primary task to stand up against cooptation, sectarianism and shadier forms of repression — and in favor of an explicitly revolutionary nonviolence which defends all people’s organizing in defense of their self-determination rights.

Waging Nonviolence depends on your support. Become a sustaining member today and receive a gift of your choice!

5. We must be appealing, use positive messaging, build bright cultural icons and tell the truth as we go well beyond “talking to the choir!”

If Late Night talk show celebrity Seth Meyers feels comfortable talking about the roots of systemic injustice beyond Trump and the need for long-term organizing, surely we can do no less. On Nov. 10, Meyers exclaimed, “Clearly the deep rot in our political system and the conservative movement exposed by Trump’s rise is not going away anytime soon; he is not unique and fixing that will require bold, systemic change!”

We must be aware that the United States is an empire in decline. Whomever the government “leader,” the U.S. now faces divisions typical of such a historic moment. Instead of being passive consumers of left or right orthodoxies, we must dare to take radical and inspiring direct actions which build political-economic programs that educate and bring people into a progressive movement. We must dare to have fun — to laugh and love and take care of and pace ourselves — while doing this!

The last year has seen a great rise in successful, local workers strikes. And more and more people are now preparing for a possible general strike — a need which will still be necessary to pressure a new administration. Centering on a singular, coordinated date and time is not the only way to organize. However, ongoing, rolling actions that boldly challenge all systemic injustices can take place on a limited monthly basis (as the group Peoples Strike has proposed, calling for actions on the first of each month).

We have to construct the kinds of transformative policies that even the next generation and seven generations forward can be proud of.

Fighting back against the austerity measures that are trying to save capitalism, has been the unifying focus of People’s Strike since its founding in April 2020. Initiated and led by Mississippi-based Cooperation Jackson, People’s Strike respects and encourages diverse local work around people-centered decolonization, decarbonization and environmentalism, a people’s bailout, universal health care and critical-thinking education. If we are to hope for success in reversing not just Trump but the root politics he gave voice to, we have to build strong coalitions and united fronts like the People’s Strike — to construct the kinds of transformative policies that even the next generation and seven generations forward can be proud of.

It is our collective job to learn from history and not get fooled (again) by half-baked efforts to lull us into minimal reforms tomorrow, which will only be taken away the day after. It is time to build across ideological differences and borders — to fight all forms of fascism and neofascism. It is time to build decentralized institutions of people’s power that provide mutual aid and sustenance in our times, no matter who holds the reigns of the state.