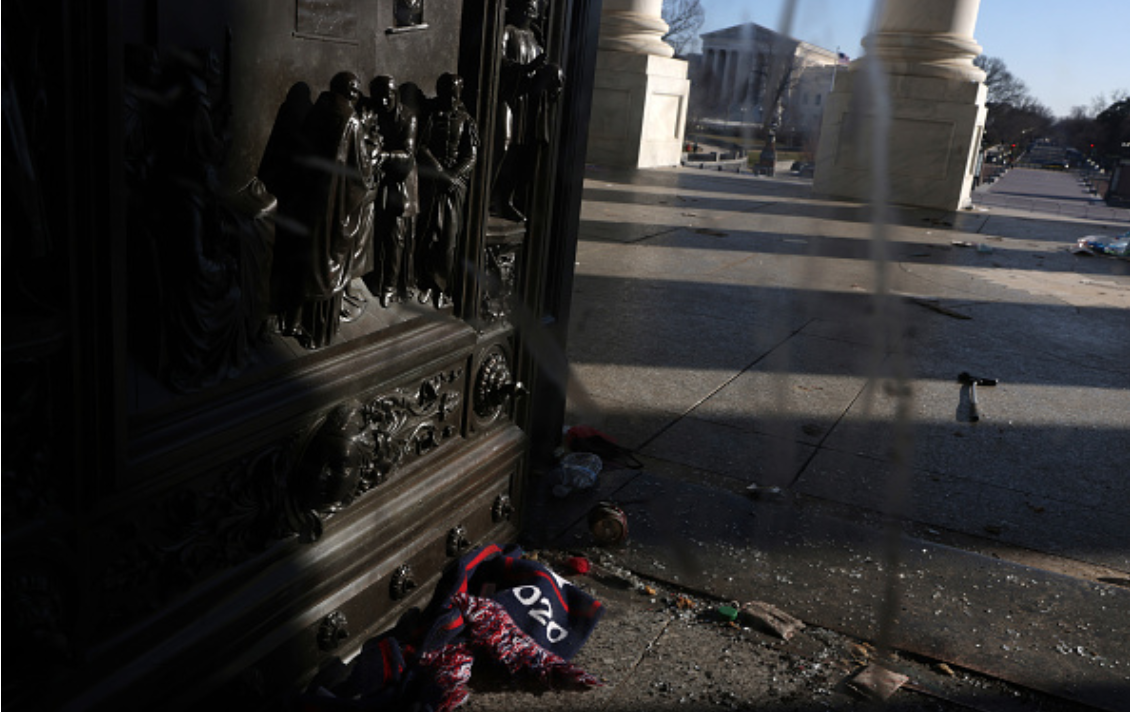 On Wednesday, we witnessed an attempted coup in the United States as a rally of pro-Trump militants breached the Capitol building and temporarily stopped a joint session of Congress from counting the presidential votes.

Donald Trump called for the protest, spoke at it and told his supporters to march to the Capitol. Fueled by weeks of his false claims of election fraud, they broke windows, scaled walls and looted House Speaker Nancy Pelosi’s office. Amid the chaos, two pipe bombs and a cooler of molotov cocktails were found, along with other weapons. One protester was shot and killed by Capitol police, and three others died, reportedly of medical conditions. Meanwhile, 14 police officers were injured by the rioters.

Choose Democracy was one of many organizations to quickly write to its followers to put these outrageous events in context. Founded this summer to prepare people to resist a potential coup, the whirlwind startup — where I served as trainings coordinator — had long predicted that if defeated at the polls, Donald Trump was unlikely to concede. However, his denial alone would not constitute an illegal power grab. What mattered would be what other people did, especially institutions like the military, police, the business community, government bureaucrats and the many other politicians involved in the electoral process.

As disturbing and dangerous as the coup attempt was, the pillars of our society largely stood and supported democracy. “We always said a coup needs legitimacy to be successful. If the goal of today’s seizure of the Capitol was to gain legitimacy, the action backfired spectacularly,” we explained in our letter on Wednesday evening. “This coup is not gaining traction or convincing the majority of lawmakers, particularly those required to certify election results.”

After fleeing the Capitol, Republican politicians quickly distanced themselves from the violence, even Sen. Ted Cruz, who had moments earlier fueled the flames of sedition by spreading Trump’s lies and demanding that Congress delay the vote count. Under fire for his role, Cruz issued a statement calling the attack on the Capitol “a despicable act of terrorism and a shocking assault on our democratic system.” Conservative Sen. Tom Cotton tweeted, “Violence and anarchy are unacceptable… This needs to end now.”

The Choose Democracy trainings always emphasized the importance of bi-partisan opposition to any coup attempt, and the reason for that swiftly appeared. As an afternoon Politico headline put it, “Trump world pleads with the president to condemn the storming of the Capitol.” Alyssa Farah, Trump’s former White House communications director, implored Trump, tweeting the truth that many loyalists had been dodging for weeks: “The Election was NOT stolen. We lost.” Meanwhile commentators like Piers Morgan called for Trump’s resignation, the NAACP demanded impeachment and the National Association of Manufacturers called for Vice President Mike Pence to institute the 25th Amendment, which allows the cabinet and vice president to remove the president from office.

After President-elect Joe Biden made a national speech demanding Trump unequivocally tell protesters to go home, Trump relented, though his video message was mixed at best. He called on his supporters to “peacefully go home” while praising their motives and repeating the lie that the election was stolen.

The swift backlash against the coup attempt could be felt within the Capitol, which police successfully cleared of protesters within a few hours. When Congress resumed the divisive vote count at 8 p.m., some of the Republicans who had planned to raise objections relented, moving more quickly to acknowledge Joe Biden’s victory than they originally planned. Even Trump ally Sen. Lindsay Graham declared, “enough is enough.” In the early hours of Thursday, Pence read the final count, affirming Joe Biden’s victory. Trump soon released a statement promising an “orderly transition” on Jan. 20.

This violent coup attempt appears to be backfiring on its perpetrators, and they seem to be losing both in the electoral process and in the sphere of public opinion.

While the backlash to the violent coup attempt may have turned the tide on denial of the election results, there were already many signs that the pillars of democracy were holding, despite the flagrant assault on them. Before the riot began on Wednesday, Pence signalled he would not and could not stop certification with a letter to Congress, as Trump had suggested. In recent days, all 10 living former Secretaries of Defense published a strongly-worded op-ed in the Washington Post warning against military involvement in settling the election. In a famously recorded phone call, Georgia’s Republican Secretary of State rebuffed Trump’s demand to “find” enough votes to change the state’s election result.

For weeks, Choose Democracy had been affirming the many local and bi-partisan election officials who were doing their jobs according to the law, sometimes in the face of death threats by Trump supporters. As the vote counting and certification proceeded, it became clear that the kind of national strikes or protests planned for an actual coup did not make sense in this situation, despite the president’s outrageous fraud claims and the growing number of supporters who believed them. Instead, the group encouraged anti-coup activists to call their local officials and continue to urge them to uphold the will of the voters, a strategy that began weeks before the election.

This logic held Wednesday afternoon and evening, even as the Choose Democracy letter acknowledged “the emotional weight of this moment” of an actual coup attempt. “Strategically we think this is a last gasp and the risks are huge if we simply tell people to rush into the streets,” we wrote. The reasons were simple. It was widely believed that Trump was looking for an excuse to declare martial law, and large anti-Trump protests could provide the pretext, even giving him an excuse to try to delay the inauguration. If any conflict occurred between Trump supporters and opponents, Trump would use that to bolster his own narrative. In fact, the right was already blaming the violence at the Capitol on antifa and other Trump opponents, against all evidence.

Trump overplayed his hand. As scary and sad as it is, this is a great last memory for Americans to have of his presidency.

“This violent coup attempt appears to be backfiring on its perpetrators, and they seem to be losing both in the electoral process and in the sphere of public opinion,” Choose Democracy explained, urging supporters to stay home. “They look out of control. Tonight, the most effective action is to let the coup plotters expose how isolated and unsupported they are. Their actions are doing that.”

In fact, the protest at the Capitol had not been very large or well organized by D.C. standards. Similar protests around the country had revealed a movement bigger on bluster than support or strategy.

In addition to the danger of lies and a media echo-chamber that doesn’t challenge them, the attempted coup highlighted other serious issues, including the attitude of the police, which seemed shockingly unprepared and relatively unconcerned about the predominantly white mob that got through the barricades with relative ease. Some rioters even appeared to take selfies with the police charged with protecting the Capitol they were occupying. Remarkably few of the rioters were arrested when the Capitol was cleared in a largely nonviolent operation — a sharp contrast to the violent treatment of nonviolent Black Lives Matter protesters this summer. As our Thursday morning follow-up-letter noted, “The side-by-side images of previous Black protesters’ treatment versus the overwhelmingly white crowd of Trump supporters is breath-taking. It is an example of how racism plays into policing.”

Meanwhile, the role of social media is also coming under fire, as Twitter and Facebook froze Trump’s account under charges that they contributed to the violence and chaos by spreading Trump’s lies.

By far the most outstanding question is what will happen between now and Inauguration Day. Trump’s promise of a peaceful transition came as calls for his imminent removal grew, with even White House staff reportedly discussing the possibility of invoking the 25th Amendment. By Thursday morning, Choose Democracy was encouraging people to sign the NAACP’s petition for impeachment, which could preclude Trump from holding office again, while forcing Congress to take a stand on his treasonous behavior. This could be helpful in convincing at least some of the many Americans who believed his lies while also providing a forum to highlight the complicity of people like Cruz. As our Thursday morning letter noted, “We are glad they decried the violence yesterday. But they planted the seeds. When they talk about a stolen election or non-existent fraud, they are still watering them. We will not forget that.”

George Lakey, Choose Democracy’s lead trainer, noted in an email to his own followers on Wednesday night that the pillars may ultimately be strengthened by the failed coup attempt. “Trump overplayed his hand. As scary and sad as it is, this is a great last memory for Americans to have of his presidency; it helps inoculate against his leadership in the future.”