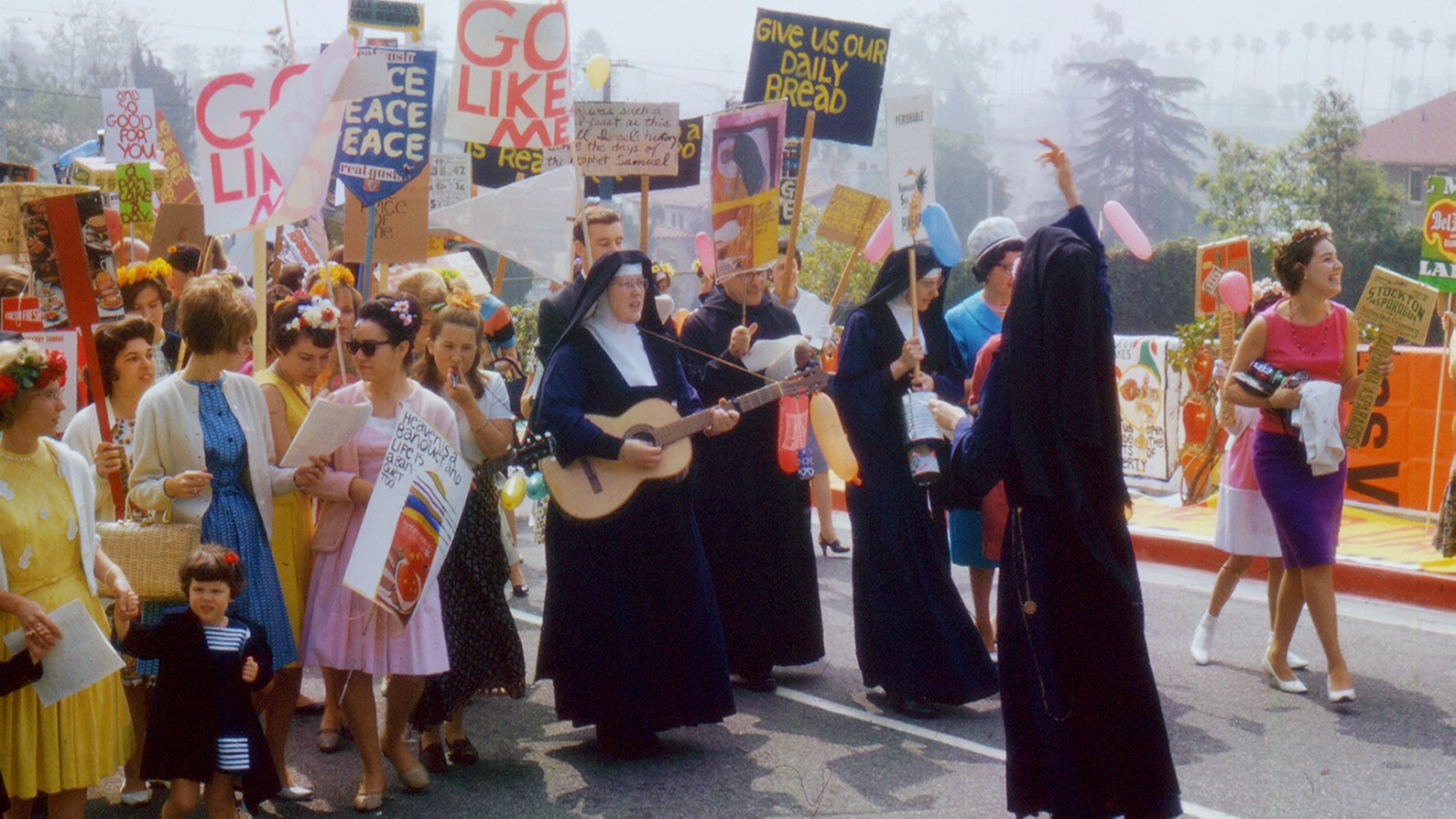 Big white signs with the phrase “I Like God” flapped on a spring afternoon. Other people carried “God Likes Me” signs. There were guitars, flowers, bare feet and a general vibe of hippie love, but also lots of nuns and political statements.

“What does Mary — patient, virgin Mary — have to do with revolution? Only everything,” declared Sister Helen Kelley, president of Immaculate Heart College in Los Angeles.

It was Mary Day, 1964, and despite the festive but reverent atmosphere, Cardinal James McIntyre was furious.

“Rebel Hearts,” the documentary that tells the story of these nuns who stood up to the patriarchy and rigidity of the pre-Vatican II Church premiered at virtual Sundance last month and is now taking a turn on the festival circuit. It’s the story of religious women who stood up for the people and the faith they served, and who paid a very high price for their spirit and courage.

‘Wake up and be open to your responsibility’

2021 is the perfect time for “Rebel Hearts” to burst on the scene. As director Pedro Kos and producer Shawnee Isaac-Smith note, the film took 20 years to complete. They could not have predicted that it would be released on the heels of a brutal and uncertain national election or in the midst of a global pandemic — let alone at a time when public space feels dangerous and contested, with white supremacist mobs marauding, rioting and killing. Such chaos may seem a far cry from the religious upheaval of Vatican II — and surely the stakes today seem higher — but the questions for anyone living through a time of radical change remain the same: Will the change be lasting? Will we change too?

The Sisters of the Immaculate Heart of Mary immersed themselves in the movements for change in the world.

The great juxtaposition in the film is images of nuns marching in the streets against the Vietnam War and for civil rights while the jewel encrusted Cardinal processes like a pasha for a procession through the ornate cathedral. The “nuns took the vow of poverty and we kept it,” a priest with a gleaming watch quipped to the filmmakers.

Cardinal James McIntyre, an old-school authoritarian from New York, is sent to Los Angeles to oversee the church. He had a background in finance from his days on Wall Street before becoming a priest. He oversaw a Catholic building boom in Los Angeles of churches and parochial schools. The women watched this boom and thought “Who is going to teach in all these schools?”

The Cardinal viewed nuns as nothing more than “coolie labor for his schools.” The nuns were sent to work in the schools with no training, no resources and no wages. They had 80 children in a class. One nun had 83 sixth and seventh graders in her class. “I didn’t have the skills to manage that many youngsters, much less teach them anything.”

The Sisters of the Immaculate Heart of Mary were immersing themselves in the movements for change in the world. They were educators and artists, scientists and musicians, administrators and activists. They were bringing the Gospel out of the schools, convents and church naves and integrating it into all their interactions.

One thread running through “Rebel Hearts” is the social activism and radicalism of the nuns, exemplified in the film by Sister Patrice Underwood who traveled from Southern California to answer the call from the Student Nonviolent Coordinating Committee to participate in the 1965 march from Selma to Montgomery for civil rights. She would later share her experiences of marching behind Martin Luther King, having a quiet lunch with Coretta Scott King and being targeted for extra verbal abuse because of her iconic habit. “Wake up and be open to your responsibility to reach out to those suffering racial prejudice and injustice,” she would tell people. The Cardinal asked “Who gave her permission [to go to Selma]?”

The male power structure of the church was threatened by their assertions and tried to shut them down, but the sisters knew their hearts, their power and their worth.

It was Sister Mary Humiliata — Anita Caspary — the Mother General of the Immaculate Heart Sisters who gave Sister Patrice permission, and she suffered the consequences. In “Rebel Hearts,” Sister Anita stands out again and again for her compassionate leadership, principled diplomacy and capacious resolve in the face of the Church’s intransigent patriarchy. She studied English and received a doctorate from Stanford and eventually came to lead the college and then the order.

Sister Corita Kent, the exuberant pop artist whose colorful prints invited and challenged, was another member of the community. It was her clear vision and deft hand that organized the new Mary Day in 1964, attracting many new people. The Cardinal hated her artwork, was threatened by her popularity and sought to have the scope of her vision blinkered.

Dispensing with the habit and the patriarchy

With the Second Vatican Council, Pope John XXIII sought to “throw open the windows of the Church so that we can see out and the people can see in.” The Sisters of the Immaculate Heart of Mary could feel the fresh air thousands of miles away. Vatican II gave a framework to the openings and connections that the sisters were already pursuing with such vitality. It was a period of profound discovery. The Immaculate Heart of Mary Sisters had 540 members and began to enact the Vatican II ethos within the community. Everything was up for reexamination and revision — from the way they prayed and how often, to how they dressed and who they looked to for guidance. They circulated questionnaires, they experimented, they held frequent meetings.

More than 300 of the 400 sisters renounced their vows to form a new non-canonical community.

And then, by their 1967 general assembly, the Sisters of the Immaculate Heart had their answers and began to enact the changes they wanted to see. They addressed the labor issues that brought the nuns so much pain and exhaustion. They insisted that it would be inhuman — and unfair to both teachers and students — for any sister to teach more than 40 or so students at a time. They demanded sisters should have training and education of their own before they started teaching. Regarding the habit, the sisters’ experiments had proved they could dress modestly and modernly and be nuns without the traditional garb. They dispensed with the habit. They declared that sisters did not need priests to tell them when and how to pray. Finally, after much discernment and prayer, they concluded that they did not need permission to be involved in social and political causes, to march, to organize, to follow their conscience.

The male power structure of the church was threatened by these assertions and tried to shut them down, but the sisters knew their hearts, their power and their worth. In one day, 200 nuns left their positions at Catholic schools. The church responded by closing the poorer schools and trying to blame it on the nuns.

Finally, a delegation was sent from Rome to tell the sisters they must comply. But in the meeting, the priests asserted if the rules are too much, the sisters should just accommodate and pretend to do what they are told. It is a stunning moment in the film and a shameful rupture for the faithful. The lie, the silence: It infects the whole Church — from silence and accommodation in the face of sexual abuse and predation to the silence and accommodation toward militarism.

The sisters rejected silence, accommodation and secrecy. They rejected the male hierarchy. Corita asked, “What would Jesus say?” The sisters respond by beginning again with enthusiasm, reasserting themselves as a “community of hope in an unending search for personhood.” And to do that they had to leave formal religious life. More than 300 of the 400 sisters renounced their vows to form a new non-canonical community.

This was a difficult process. In the film one sister imagines it is what divorcing people feel like. But, according to Anita Caspary, this change “gave us the freedom to be self-determining and to make moral choices on the basis of conscience, without leaning on the authority of others.” It is “the same struggle for feminist values that continues for women in all walks of life today, especially for women in the church.”

“Rebel Hearts” is such a current story and not just because we have the second Catholic president now. These sisters stepped out into the world, and found that the world would welcome them, that it needed their gifts, their love, their intelligence. The Immaculate Heart Community now welcomes men, lay people, families. The community provides a firm foundation for women priests, for church renewal, for radical action, for community. They continue, in a different form than they expected, but they carry on.

In the end, it seems the institutional church suffered more than the sisters, as it continues to decline in relevance, even as the charisma of vital, fervent love and creativity embodied by the sisters flourishes. As Sister Corita noted in one of her art works at the time, “Let the sun shine in.”