‘QAnon Shaman’ says he was ‘waved’ into Capitol by police & stopped rioters from stealing muffins, in bizarre interview from jail 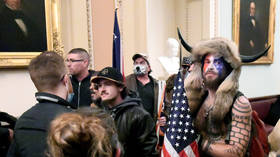 Jacob Chansley, also known as the ‘QAnon Shaman’, gave his first interview from jail and pushed back against claims that his role in storming the Capitol was an “attack on America.” Police “waved” him into the building, he said.

Chansley, who became perhaps the most recognizable face of the Capitol riot on January 6, as images of him shirtless and wearing bull horns quickly went viral, has spoken out ahead of a Friday hearing that will determine whether he will be released from jail ahead of his trial.

In an interview with 60 Minutes Plus reporter Laurie Segall, Chansley claim that police officers “waved” him into the Capitol building and this made him believe it was “acceptable” to enter, though he now regrets his decision “with every fiber of my being.”

Chansley said it was the “unfair” treatment of Donald Trump by the establishment that made him such a loyal supporter.

“I developed a lot of sympathy for Donald Trump because it seemed like the media was picking on him and seemed like the establishment was going after him unnecessarily or unfairly, and I had been a victim of that all of my life, whether it be in school or at home,” he said.

Though he remains loyal to the former president and believes he “cares about the Constitution,” he now feels “wounded” after he and others were not given a pardon for their part in the Capitol riot before Trump left office.

Chansley is one of hundreds that were arrested for storming the Capitol on January 6 shortly after Trump gave a speech telling supporters at a rally in Washington, DC to “fight like hell” and promoted election fraud conspiracy theories. The riot left five people dead, including a Capitol police officer.

Chansley said, however, that his part in the incident was smaller and more positive than most people think, claiming he even stopped people from vandalizing and stealing.

“My actions on Jan. 6. How would I describe them? Well, I sang a song,” Chansley said. “I also stopped people from stealing and vandalizing that sacred space. OK, I actually stopped somebody from stealing muffins out of the break room.”

Chansley said his actions, including the singing and muffin protection as well as saying a prayer, were part of “shamanism.”

Prosecutors, however, have alleged that Chansley wielded a weapon during the Capitol riots, a spear attached to a flagpole and left a threatening note for former Vice President Mike Pence. “It’s only a matter of time, justice is coming,” the note reportedly said.

He was arrested less than a week after the riot and is being charged with disorderly conduct on Capitol grounds and knowingly entering a restricted building without proper authority. He could be facing up to 20 years behind bars.

Chansley is seeking to be released before his trial, but prosecutors have argued he should remain in jail as he is a danger to society.

“He cannot be trusted now to suddenly change course,” they said.