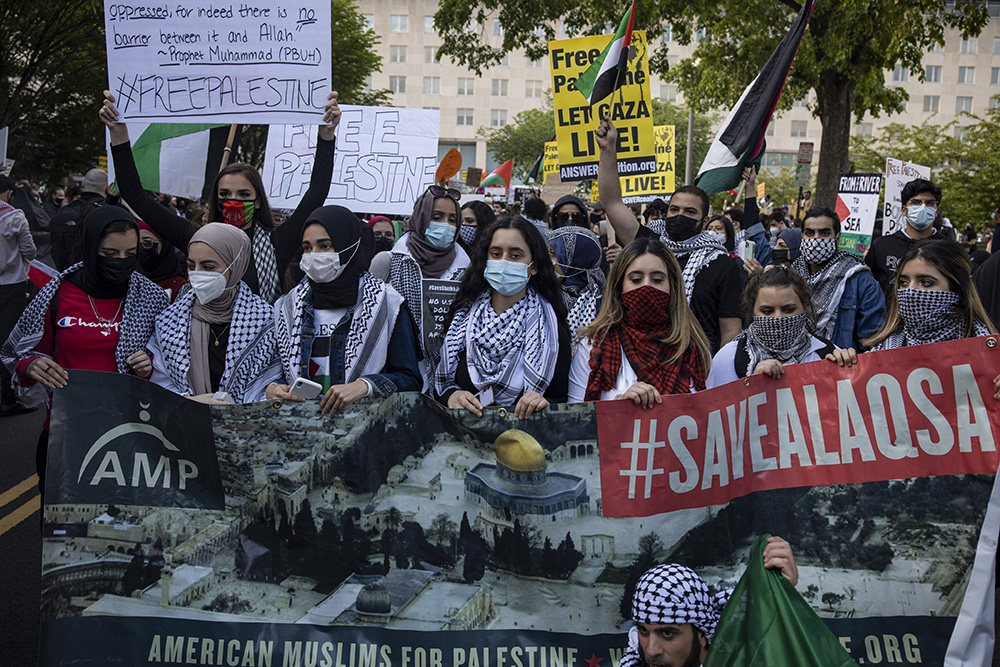 Hundreds gathered in Terry Schrunk Plaza in downtown Portland, Oregon with signs denouncing the violence that is now crushing the Gaza Strip’s over two million residents. At this storytelling rally, Palestinians — who are so often rendered invisible in discussions of the Israeli-Palestinian conflict — spoke about their experiences of displacement. These centered on talking about how the forced expulsion of Palestinian Arabs in 1948 (known as the Nakba, or “disaster” in Arabic) affected them and their families.

The Portland rally was one of hundreds crossing the globe as people respond to the escalating violence in Israel and over the border into the Gaza Strip. Far-right settlers have been pushing Palestinian residents out of the East Jerusalem neighborhood Sheik Jarrah in an effort to make the area Jewish only. These increased tensions and protests escalated as Ramadan came to an end, with Israel blocking access to the Al Aqsa mosque and attacking Palestian protesters.

After Hamas fired rockets, Israel began its most aggressive bombing campaign since 2014. Hundreds of Palestians, including children, have been killed as the Israel Defense Forces, or IDF, targeted residential areas. As tensions escalated, far-right Jewish mobs have been attacking Palestinians with street violence, which many people allege has been aided by Israeli police. As of Wednesday, the Gaza health ministry says that 224 people have been killed in Israeli air strikes, including 64 children, while an additional 1,620 have been injured. There have also been 20 killed in clashes with Israeli forces in the West Bank. Israel, for its part, has seen 10 casualties.

Activists say that the asymmetry in the capacity for violence is allowing Israel to use unparalleled lethal force against Palestine, something that is both disproportionate to anything Hamas has done and further exacerbates the military occupation that has lasted more than 50 years. With outrage mounting, Palestinians are being joined by international solidarity activists who are using their unique American position to push back on Israel’s conduct.

Because so many Palestinian solidarity organizations have been on the ground, building up relationships and campaigns for many years, they were able to respond quickly as the IDF escalated violence. Cities around the United States joined others from around the world in marches, rallies and speak-outs to raise the voices of Palestinians.

In Chicago, the local chapter of American Muslims for Palestine, or AMP, worked with six other organizations in the Coalition for Justice in Palestine to put on a series of actions directly after the bombing started. This included a rally and march on May 16 that brought out thousands in an effort to communicate what is happening in the region.

“It was primarily to raise awareness about what’s happening to pressure our elected officials to act and to speak out and to basically educate the general public,” said Deanna Othman, a board member of AMP Chicago. “[An] important component is contacting their elected officials, putting pressure on American government to understand that we’re fed up with funding this occupation and that we’re not going to accept this.”

AMP Missouri in St. Louis also took the lead in organizing these actions. They held a May 18 rally at City Hall to call on politicians — who bank their reputation on progressive policy claims — to live up to their promise and speak out on Palestine.

“The goal was to raise awareness as the media has been censoring us both online and from local media outlets, but also to put pressure on the general public to speak out,” said Neveen Ayesh of AMP Missouri, who works primarily on government relations with the group. “We fund the atrocities occurring in occupied Palestine, as the United States sends the state of Israel an unconditional $3.8 billion a year.”

Both were clear that the primary way people can actively support Palestinians right now — both as IDF military actions and the occupation continue — is to support the movement for Boycott, Divestment, and Sanctions, or BDS, on Israel. This involves boycotting products from Israel, particularly in the settlements; calling on organizations, such as universities, to divest investment funds from Israel; and pressuring governments to level sanctions on Israel for human rights abuses.

“We look at it as a nonviolent and peaceful method of resisting … pressuring Israel through our dollars [and] tax dollars to stop the human rights abuses and atrocities,” Ayesh explained. “We’re calling on them to stop harassing and arresting [Palestians], and murdering and massacring them. BDS is the only solution at this point. Palestinians don’t have a military, we don’t have an army and air force. Our options are limited …This is not something that just happened two weeks ago. This apartheid, this genocide, this atrocity has been occurring since 1948.”

Campus organizations like the nationwide Students for Justice in Palestine network, or SJP, have taken action at colleges and surrounding communities, bridging the world of student activism with the larger Palestinian solidarity movement.

“I think through raising enough awareness globally, especially through social media, we can apply pressure on Israeli forces to back down,” said Sofia Sinnokrot, an organizer with SJP at the University of Illinois at Urbana-Champaign, which held rally in solidarity with the residents of Sheik Jarrah and those affected by the bombing. “This type of mass pressure and continual boycotting of Israeli products and institutions will definitely be an aid to the Palestinians in our fight for liberation. I highly encourage people in the U.S. to get involved with their university’s SJP or to join a local organization in their city that is dedicated to fighting for the Palestinian cause.”

SJP is calling for BDS resolutions both at University of Illinois at Urbana-Champaign, where they were successful in passing one, as well as colleges around the country a strategy that seeks to end academic and financial relationships between American colleges and Israel. Divestment resolutions have been passed at dozens of universities, including Fresno State University, Swarthmore College and Occidental College.

While marches are escalating, activists talked about how to influence decision makers to allow for a ceasefire, which would mean the United States stepping back from interfering with the U.N. Security Council’s attempts at halting the violence. Putting pressure on politicians with demonstrations, call-in campaigns, and boycotting political participation in community events all create points of leverage. If the United States, Israel’s prime ally and military funder, can be pressured to start pulling back on unilateral support, this could weaken Israel’s ability to take autonomous action against Gaza and, potentially, halt or reverse settlements.

Most immediately, there are calls to push legislators to support the Palestine Children and Families Act (HR 2590), which was introduced by Rep. Betty McCollum to end aid to Israel that could be used to expand annexation or home demolitions in Palestine.

“Showing up in the streets is super important,” said Morriah Kaplan, a spokesperson with the Jewish anti-occupation group IfNotNow. “It demonstrates that there is mass resistance to the bombings in Gaza, and to the other practices of the Israeli government, such as home demolitions, violent forced expulsions, the various ways [the Israeli] government works to strip Palestinians of their land and their rights and their livelihoods.” (IfNotNow does not have a formal position on BDS).

Since Jewish safety is often invoked when defending Israel’s military action, IfNotNow says that many Jews want to send the message that they “don’t think Jewish safety is contingent on Palestinian suffering.” IfNotNow is looking to put long-term pressure on progressive legislators to speak out in support of the Palestinian communities they say are under threat and not provide aid with a “no strings attached” mentality.

While these actions are happening, pressure is amassing inside of Palestine, with a recent general strike leveling $40 million in economic damages as one of the largest labor action in the region’s history showed the ability of Palestinian workers to fight back.

In Portland, Palestinian residents told story after story of the generational trauma that has come from the ongoing displacement, and what it would mean to have a stable Palestine without the threat of military or settler violence.

“We have to recognize that the Israeli occupation is illegal … there are human rights violations that occur. And, usually, when things like that occur, there are sanctions, there are repercussions,” said Farouki, noting that this is an ongoing struggle to create accountability for Israel’s treatment of Palestinians in the occupation. “As an international community, we have to do everything that we can do from the outside of Palestine. We have to take the lead to isolate the occupation government and make them pay for the crimes that they do via boycotting, sanctions and forcing local and larger governments to divest from companies that are engaging in the occupation.”

With a potential ceasefire still unclear and death tolls growing, the humanitarian crisis in Gaza and the occupied territories is continuing to weigh on the consciousness of the world. In the United States, organizations will continue to follow Palestine’s lead in building a movement for a more just solution to the crisis. That is requiring a mass movement of people pushing the United States to rethink its relationship with Israel and to shift the balance of power from uniform support for Israel to uniform recognition of human rights.