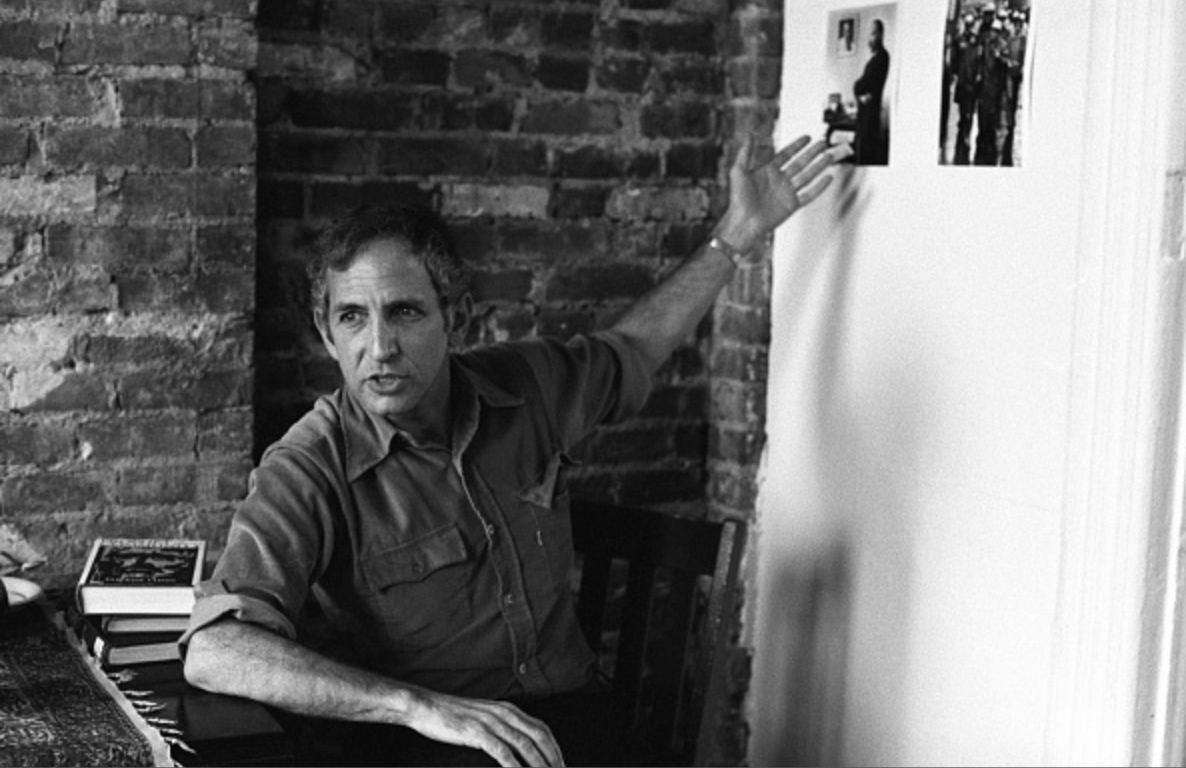 Daniel Ellsberg’s release of the Pentagon Papers 50 years ago this week represents one of the most dramatic — if not the mostdramatic — nonviolent actions of the movement that helped end the Vietnam war. It was also one of the most impactful as it precipitated events that led to the downfall of Richard Nixon. Less known is how the success of this action hinged on Ellsberg’s personal conversion to nonviolence.

The media had a field day with the Pentagon Papers story. No wonder. It captured front-page headlines and network news for weeks: top secret documents revealed decades of governmental duplicity; a whistleblower eluded a massive FBI manhunt; the New York Times defied the president and published the papers; major newspapers joined in the defiance; a landmark Supreme Court decision vindicated the media; the whistleblower avoided a 100-plus year prison term because of governmental misconduct.

If the anti-Vietnam War movement has produced any celebrity, surely it’s Daniel Ellsberg. Two major filmmakers have put the story onto the big screen — the Oscar-nominated 2009 documentary “The Most Dangerous Man in America“ and the 2017 Hollywood feature “The Post,“ directed by Steven Spielberg and starring Meryl Streep and Tom Hanks.

Last month, the University of Massachusetts Amherst sponsored a major conference about the Pentagon Papers’ legacy with Ellsberg himself, fellow whistleblower Edward Snowden, Nixon aide John Dean, and about two dozen journalists, activists and historians. (If you missed the conference, you can still check out the recording.)

Rather than bask in his fame, Ellsberg has used it relentlessly to bolster progressive causes on platforms big and small — or joined civil disobedience actions all over the country. (I was arrested with him four years ago at a nuclear weapons site when he was 86 years old. While in custody, he remarked that he had been busted about the same number of times as his age.)

Not only had Ellsberg become convinced intellectually that he had to do something against the war, he allied himself with the antiwar movement.

The personal story behind the release of the Pentagon Papers is nearly as dramatic as the public one. A former Marine, Ellsberg was a gung-ho anti-communist who spent several years in Vietnam working for the government and then for a defense contractor. He became disillusioned with the American conduct of the war and the lies that perpetuated it. But he had only minimal knowledge of the antiwar movement or nonviolence until he met several activists at a conference at Princeton in 1968, including an Indian woman named Janaki, who introduced him to the philosophy of Gandhi and Martin Luther King. He was blown away. In his memoir “Secrets,” Ellsberg said that it was a “genuinely new way” of thinking. “It seemed as though it might even offer… a chance of bringing about real change away from violence and revenge.”

Anyone who has spent time around Ellsberg is impressed with his intensity and thoroughness. So, it is not surprising that he spent much of the next year reading everything he could about nonviolence — King, Gandhi, Thoreau, Tolstoy, Joan Bondurant, Barbara Deming, among others. Though still working for a defense contractor, he attended another conference, this one sponsored by War Resisters International. There he met several draft resisters, one of whom — a Quaker named Bob Eaton — was sentenced to three years in prison for draft resistance in the middle of the conference. Another — Randy Kehler, a War Resisters League staffer — gave a speech that changed Ellsberg’s life. Randy asserted that he was looking “forward to jail, without remorse or fear, because I know that everyone here and lots of people around the world like you will carry on.”

Randy’s words hit Ellsberg “as though an ax had split my head, and my heart broke open.” He left the hall and went to the men’s room where he sobbed uncontrollably for about an hour. “What I had just heard from Randy had put the question in my mind, ‘What could I do, what should I be doing, to help end the war now that I was ready to go to prison for it?’” Before long he knew his answer: Disclose top secret documents in his office that would become known as the Pentagon Papers. The cold warrior had been transformed into an anti-warrior.

Ellsberg’s account of his conversion reveals two important factors that contributed to the effectiveness of his action. First, not only had Ellsberg become convinced intellectually that he had to do something against the war, he allied himself with the antiwar movement. This was no small matter. To his associates in the government and his defense contractor employer, he had gone over to the enemy.

During the War Resisters International conference, he befriended several activists and even joined a demonstration outside the courthouse where Bob Eaton was sentenced. Over the next year and half, Ellsberg discretely contacted other anti-warriors while he was copying and preparing the documents. And, just a month before the documents were released, Ellsberg took part in Mayday, the massive civil disobedience action where antiwar protesters attempted to block the streets of Washington, D.C, to keep government employees from reaching their offices. Police used tear gas to disperse Ellsberg’s affinity group, which included professors Howard Zinn, Noam Chomsky and Marilyn Young.

Once the New York Times published the first installment of the Pentagon Papers, Ellsberg’s network of antiwar activists helped facilitate his remaining underground for two weeks while he sent sets of documents to other newspapers — a crucial reason why, despite its best efforts, the government was unable to stop the presses.

In this regard, Ellsberg contrasts with most other recent whistleblowers who essentially acted as lone wolves. Certainly, their courageous disclosures have been greeted approvingly by segments of the media and in progressive circles. But Ellsberg’s many allies within the antiwar movement greatly amplified the visibility and impact of his action. He spoke to large crowds of supporters in the months before his trial. And the trial itself became a cause célèbre and a highly publicized antiwar forum.

Ellsberg’s personal fearlessness was the second factor that contributed to the success of his action. As with the story of his decision to act, Ellsberg was deeply influenced by Gandhi, who wrote: “[Nonviolent] resistance cannot proceed a step without fearlessness. Those alone can follow the path of [nonviolent] resistance who are free from fear, whether as to their possessions, false honor, their relatives, the government, bodily injuries, or death.”

Ellsberg internalized this principle when he surfaced after two weeks of evading the massive FBI manhunt. As he approached the Boston courthouse surrounded by the media and dozens of activists, a reporter asked him, “How do you feel about going to prison?” Ellsberg replied simply, “Wouldn’t you go to jail to end the war?”

In effect, Ellsberg was showing that he did not fear for the consequences of his action. Indeed, he was openly defying the authorities — in the same tradition as the Vietnam-era draft resisters, the civil rights marchers in Birmingham and Selma, and the participants in Gandhi’s Salt March.

Such open defiance forces the opponent’s hand. If they don’t act, they lose face, and the nonviolent resisters win. So, almost always, those in power crack down by intimidation, arrests, or physical violence.

The authorities’ reaction sets in motion a dynamic that nonviolent theorist Gene Sharp called “political jiujitsu.” If they react too strongly, they may find that their repression backfires, especially if the resisters remain nonviolent and provide a dramatic contrast with state violence. (The Alabama state troopers’ beating of the marchers on the Selma bridge is a good example. Their behavior shocked the nation and resulted in the passage of the Voting Rights Act.)

In the case of the Pentagon Papers, Nixon became so enraged at Ellsberg’s blatant violation of the law that he did not content himself with merely letting the whistleblower be prosecuted. Nixon created a secret unit called the Plumbers that illegally raided Ellsberg’s psychiatrist’s office and organized an attempt to physically assault Ellsberg at a rally. Nixon even tried to bribe the trial judge by offering him the plum job as head of the FBI.

Nixon’s repression backfired big time. Ellsberg’s case was dropped, and the illegal activities of the Plumbers unit created to stop Ellsberg led to Watergate and Nixon’s resignation in disgrace.

For his part, Ellsberg’s courage has not diminished even at age 90. Last month he released a cache of dozens of pages of a top-secret study that revealed that the U.S. military seriously considered first-use nuclear strikes against China over a 1958 dispute over Taiwan. Ellsberg made these documents public now because he believes the same threat exists today amidst the bellicose talk between the United States and China while both countries continue stockpiling nuclear arms.

By releasing the documents, Ellsberg is daring the government to prosecute him under the Espionage Act, the same law under which recent whistleblowers have been charged. He thinks the law is unconstitutional because of its chilling effect on the right of the public to know what its government is up to. As a disciple of nonviolence, Ellsberg is willing to risk spending the rest of his life in prison for the sake of future whistleblowers.