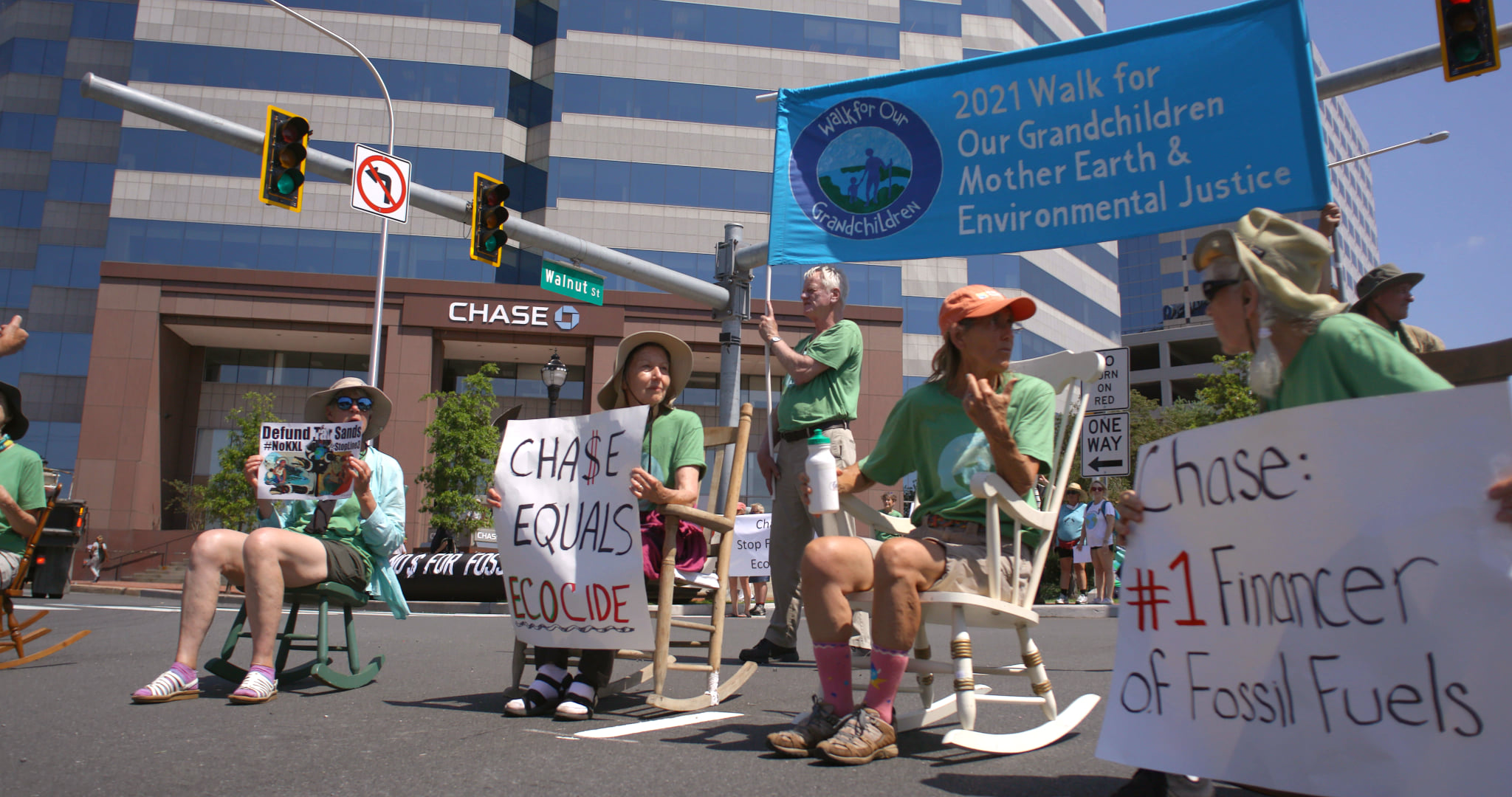 In over six decades of social action I’d never done nonviolent confrontation in a rocking chair. At 83 years old, I like it!

On Monday, June 28, a dozen of us grandparents rocked while blocking the entrance to a major Chase Bank building in corporation-dominated Wilmington, Delaware, home of President Joe Biden.

It was the final day of the Grandparents Walk for Our Grandchildren and Mother Earth, which started on June 20 in Scranton, Pennsylvania — Biden’s birthplace. With the help of vans, our 170-mile route took us through roadways, beautiful trails and the sites of crimes against nature. We visited a dangerous waste dump in Scranton, the site of the proposed Adelphia Gateway Pipeline in Bucks County , and the planned liquified natural gas pipeline threatening to cross the Delaware River to Gibbstown, New Jersey, for export to Europe.

While in Philly we also visited the site of the first oil refinery in the Unites States, which blew up last year threatening thousands of lives. There we cheered the children in a Black working-class neighborhood camp — organized by Philly Thrive — who put on a sketch depicting a dialogue between them and the fossil fools who’d been warned time and again of the danger.

We then joined Earth Quaker Action Team, or EQAT, as it protested at the headquarters of local utility PECO, which prefers to get its electricity from fossil fuels rather than solar and wind. (EQAT’s campaign is called “Power Local Green Jobs.”)

In Chester, Pennsylvania, we tried out our rocking chairs as we listened to a neighborhood group that’s been campaigning against pollution from the largest U.S. incinerator. Our walk to nearby Marcus Hook, an oil refinery town on the Delaware River, yielded more information and another chance to affirm the efforts of local people for environmental justice.

We were told repeatedly that it matters to local groups struggling against immense odds to be cheered on by others – this time by grandparents who have themselves been through plenty of struggles.

Fortunately, throughout our trip, our group included younger people who joined to support the walk, often playing important roles. Conversations between younger and older walkers helped the miles go by, especially on the very hot days. High schoolers joined us in our final Chase Bank action in Wilmington, as well as at our earlier interfaith service hosted by the local Friends Meeting. We were also cheered by news of major walks taken by the Sunrise Movement.

Happily, the front doors of a large Chase building were in the shade when we got there. After we’d placed our rocking chairs in front of the doors, the dozen of us willing to risk arrest were content to rock, chant and sing, supported by dozens of others including a local pair of drummers.

On the large patio down the steps from the Chase building’s front doors is a tall pedestal holding the statue of an enormous eagle with wings outstretched. The eagle’s menacing look seemed completely appropriate to the role Chase plays. Steven Norris, 78, and John Irwin, 66, clambered up the pedestal to wrap it in an enormous banner, holding it in place below the eagle to proclaim our message to the large volume of traffic passing by: “Biden: Be bold. STOP Cha$e & All Oil & Ga$ Financing.”

Because the bank management chose to avoid arrests at its front door, our group eventually took our rockers and banners and moved into the street in front of the bank. There we were arrested — with Padma Dyvine, 71, being the first to climb into the police van. We were held in frigid cells for some hours before release with an expectation that we would be summoned to court at a later date.

While we haven’t decided whether we’ll be bringing our rocking chairs to the courtroom, we do know one thing: Like every one else in this struggle, we’ll continue to fight for climate justice.