There’s an agenda at play here, and everyone is afraid

“If you want proof the Democrat’s sole goal of this select committee…is about weaponizing Congress to destroy a political foe, President Donald Trump I’m talking about, you only have to look at what Speaker Nancy Pelosi did today.”

House Speaker Nancy Pelosi is reportedly set to land on names like Reps. Liz Cheney and Adam Kinzinger to fill the January 6th select committee, this while Kevin McCarthy claimed he will begin his own committee or investigation into the events of early January.

House Speaker Nancy Pelosi says the rejection of two Republicans to be on a committee investigating the Jan. 6 Capitol insurrection is about “not wasting time” when we need the find the truth for the American people.

Steve Scalise: Pelosi is afraid of the facts coming out

Cheney wants to counter the whitewashing of Jan. 6

What You Missed From President Biden’s CNN Town Hall

ICYMI: “Rep. Jordan: Trump’s ‘Going To Be The Next President’, GOP Will Take House” ICYMI You can read the full article from OAN here.
https://www.oann.com/rep-jordan-trumps-going-to-be-the-next-president-gop-will-take-house/

It will be a signal that says “come to America now, because you will soon be a citizen.”

“Republicans must take seriously the effort by Democrats to completely change America through the Reconciliation Process. Democrats are now suggesting that budget reconciliation can be used to pass Mail-In Ballot legislation as well as trying to include Amnesty in their infrastructure package. The infrastructure package has little to do with infrastructure as we know it, bridges, roads, tunnels, etc., but is a dramatic expansion of Government that will cost much more than the $3.5 trillion being discussed. Don’t let this happen!

If Amnesty is included in the infrastructure package, there will be a run on our Southern Border the likes of which we have never seen before. It will be a signal that says “come to America now, because you will soon be a citizen.” Providing Amnesty to illegal aliens, in the history of what already is considered the greatest Border catastrophe, will result in disaster beyond our gravest nightmares. No country can pay this price. Will lead to ruination!

Any effort to dictate national Mail-In Voting will be a disaster for our Country and for conservatism. There will never be a Republican elected to high office again. I urge every Republican to fight this and deny Democrats a quorum if that is what it takes to make sure that the Democrats can’t use reconciliation.

Republicans must push back for the sake of our Country and, far less importantly, the sake of the Republican Party!”

“Republican Arizona State Senator Paul Boyer, a RINO if there ever was one, is doing everything in his power to hold up the damning Forensic Audit of Maricopa County which has been taking place over the last 90 days. The people of Arizona are demanding it. Boyer has been nothing but trouble, and nobody knows why. All we demand is Voter Integrity! He is being primaried by a strong and highly respected challenger, former Arizona State Representative Anthony Kern.” 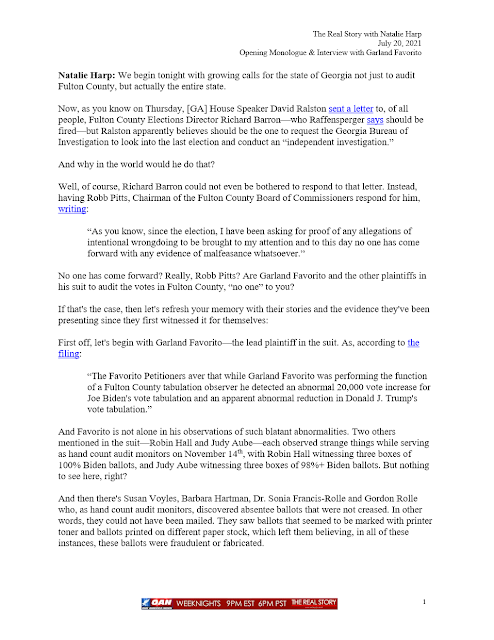 President Donald J. Trump, 45th President of the United States of America, is headed to Arizona on Saturday, July 24, to headline the “Protect Our Elections” rally.